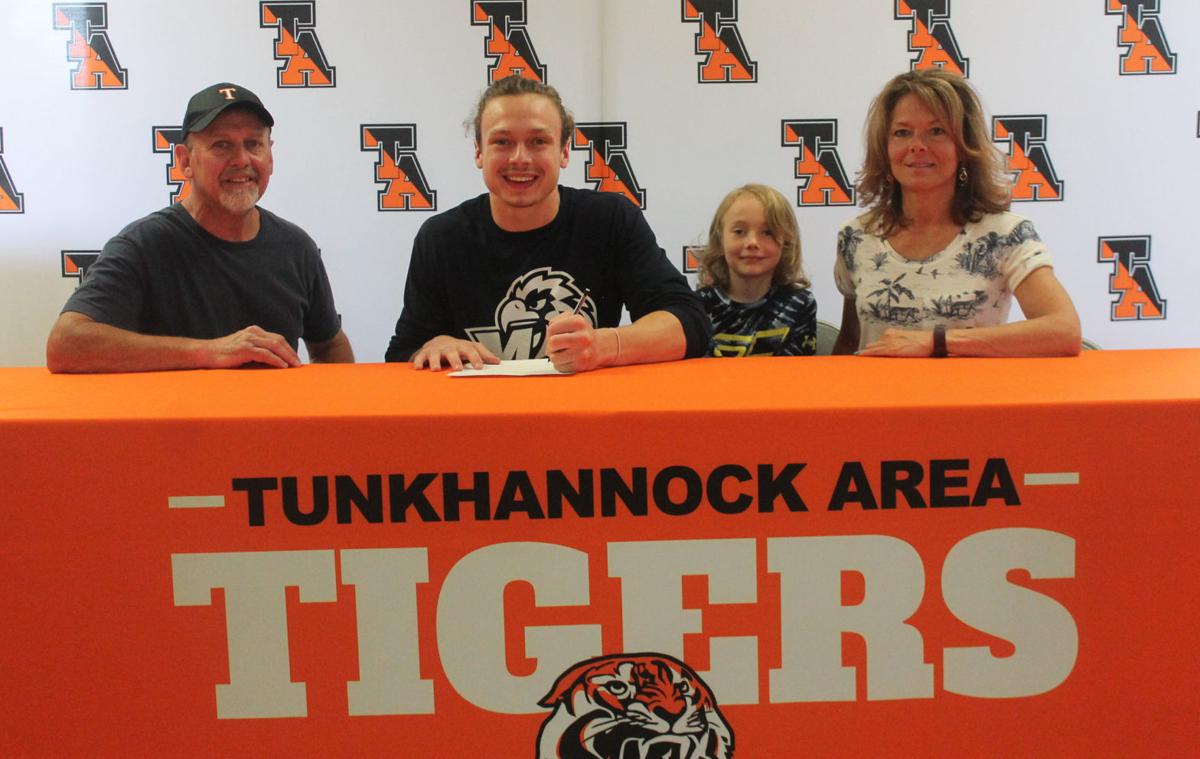 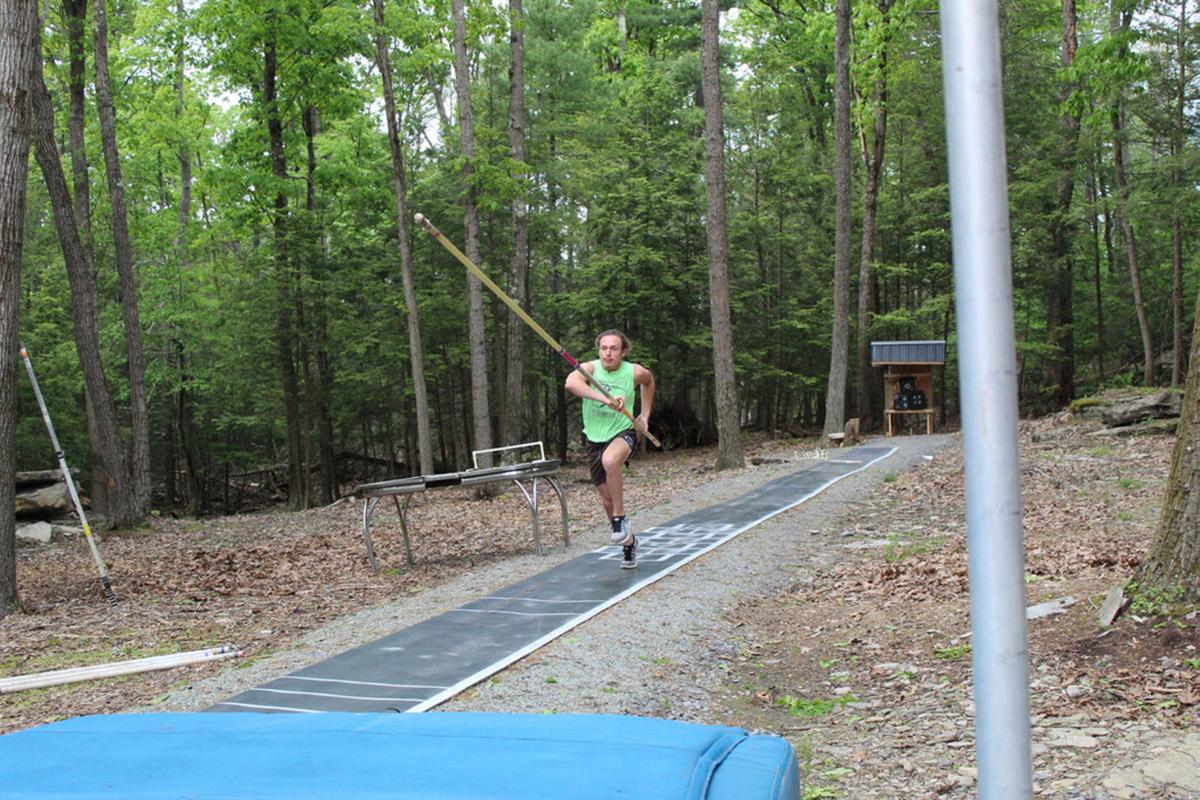 Dalton Yeust has his own pole vaulting arena on the family’s property in Tunkhannock. 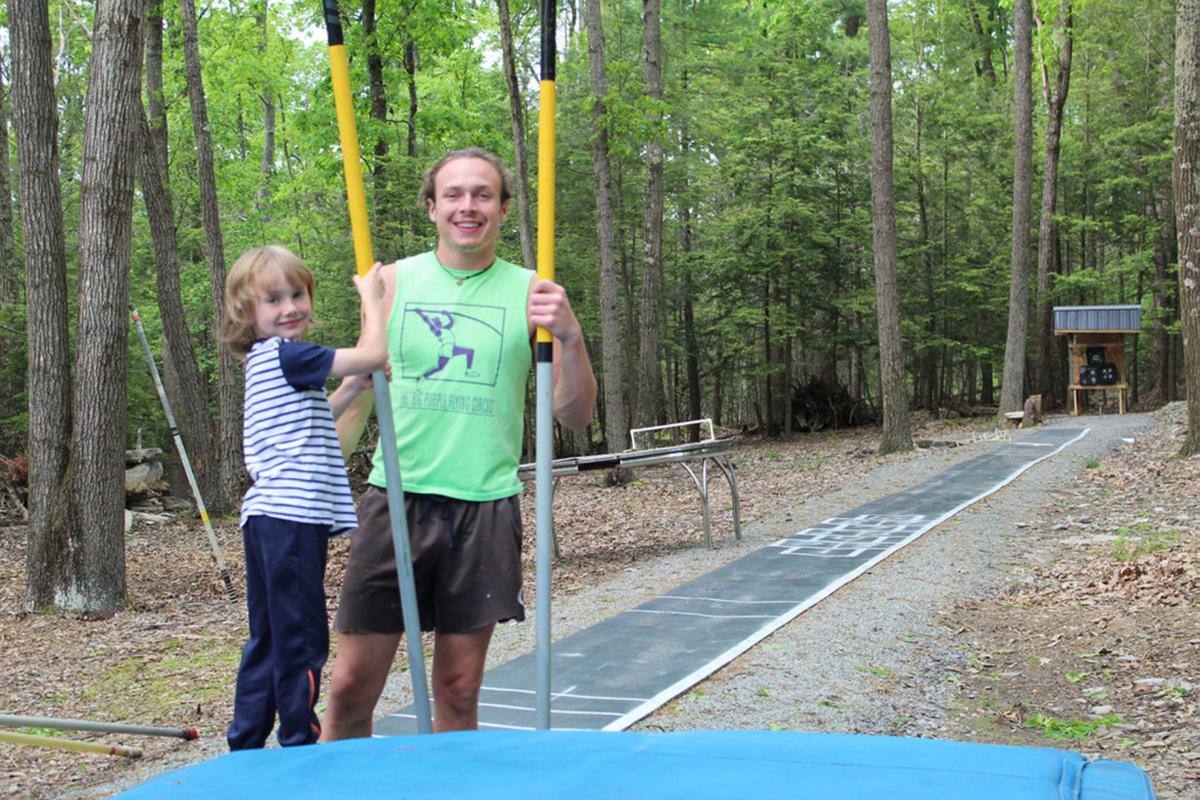 Dalton Yeust has his own pole vaulting arena on the family’s property in Tunkhannock.

He was on the right path, as he was the district champion sophomore year and junior year, and tied for ninth at states, missing the podium by one spot in his junior year.

“My personal best is 15 feet. I jumped that this indoor season,” said Yeust. “The school record is 14’ 6”. I tied it last year in outdoor season, but never broke it, and unfortunately won’t get the opportunity to break it, or a shot at the 15’ 3” district record.”

But as the season was cut short by COVID-19, Yeust turned his laser focus and dedication to training toward his college career.

This fall, he will trade in his orange and black Tiger uniform for that of a midnight blue and white Monmouth University Hawk one. Monmouth, located in West Long Branch, N.J., competes as a NCAA Division I school in the Metro Atlantic Athletic Conference.

“Naturally, with my college decision, I wanted to be by the beach,” said the laid-back senior. “When I visited Monmouth and met the staff- they had me. Everyone was very nice to me and the campus was beautiful.”

Yeust plans on majoring in business and minoring in sports administration. He would like to be a college track coach some day.

When asked what he would have done differently last year if he had known it was his last high school hurrah, Yeust said, “Knowing last year was my last year, it would have been challenging to go any harder. I pushed myself to my limit at the moment, but it would have definitely been more memorable.”

He continued, “Being on the runway and looking up at everyone in the stands was an amazing feeling. No matter how the competition went though, we always had fun later at night dancing and listening to music with our friends.”

Once the call came from Gov. Tom Wolf to cancel the high school spring season, along with the remaining winter championships, Yeust had time to consider what would have been.

“I was so disappointed. Everything we had worked for, all the momentum we had for this season, gone. Not just athletes were affected, but any member of 2020. We had done so much just to get such an awkward end to our year,” he said. “At first we tried practicing. We told ourselves we would stay in shape, in case the season came back. Shortly after that, it fell apart due to regulations of practicing on school property.”

But what vaults Division I athletes to the top of the competition, is the drive and dedication they have when no one but themselves is watching.

Yeust has his own training runway and course at his home in Tunkhannock. His personal training regime includes being able to jump when other student athletes don’t have the facilities available to them.

“I’ve jumped at my house this spring so far. Hopefully with summer, and better weather, coming we can put it more to use,” he explained. “I’m on a workout program with my good friend so hopefully that will keep me in shape.”

He does, however, share his good fortune with friends, and even competitors.

“Dani Heine comes over and jumps with me every so often. She currently goes to the University of New Hampshire and we have been good friends for a few years now,” he said.

Heine, of Waverly, missed out on her freshman season as a Wildcat.

Yeust would more than likely be at Shippensburg University competing at the state level around this time, and was supposed to be training for the outdoor nationals in North Carolina.

“I talk to my Monmouth coaches once or twice a week. I don’t think they are allowed to give me training programs yet, but I’m looking forward to them once they are. We do Zoom calls every so often to keep us on track with admissions and what not,” said Yeust, who plans on immersing himself in Monmouth’s extracurricular activities.

One perk of the season shutdown, however, has been the downtime Yeust has been able to spend with his seven year-old brother before he leaves for college.

“Being home all the time has been a blast for my little brother, Briar. Although I don’t teach him too much in the vault yet, he’s always climbing the ropes, rings, and on the pull up bar. We are always shooting hoops, playing volleyball, or doing something outside.”