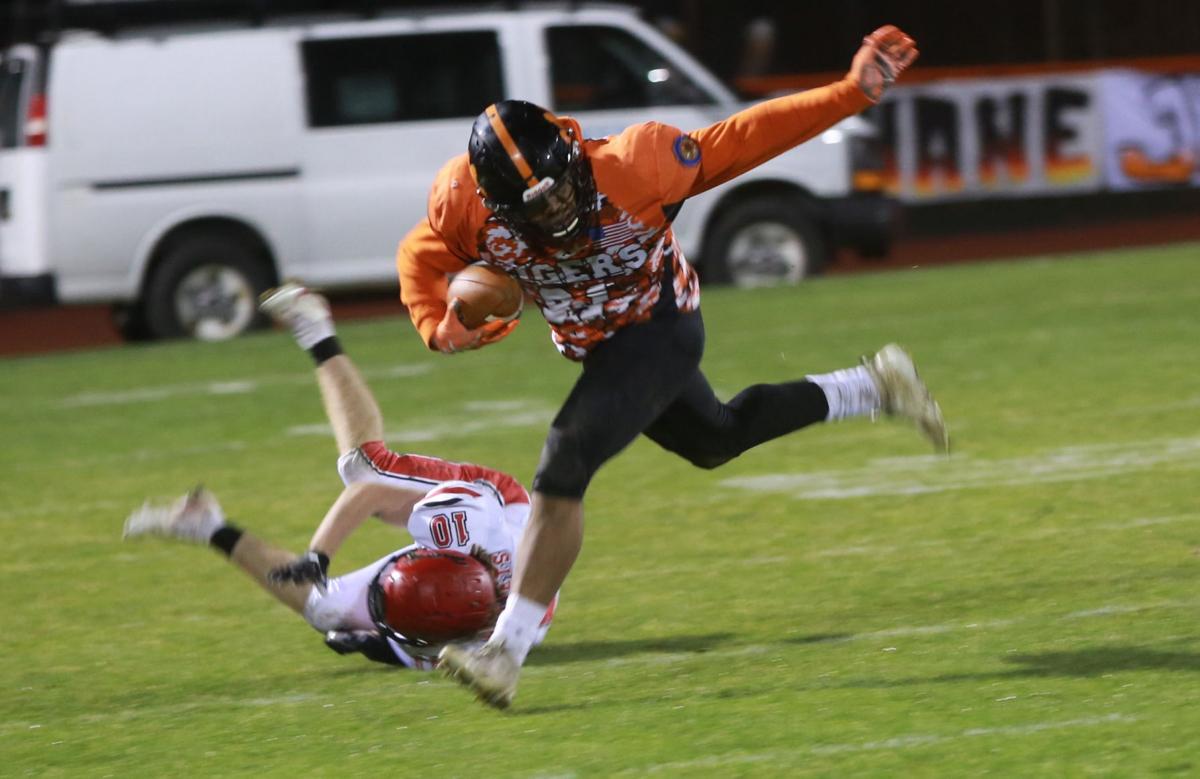 Jhamal Zacharias preserves his balance after catching a first half touchdown 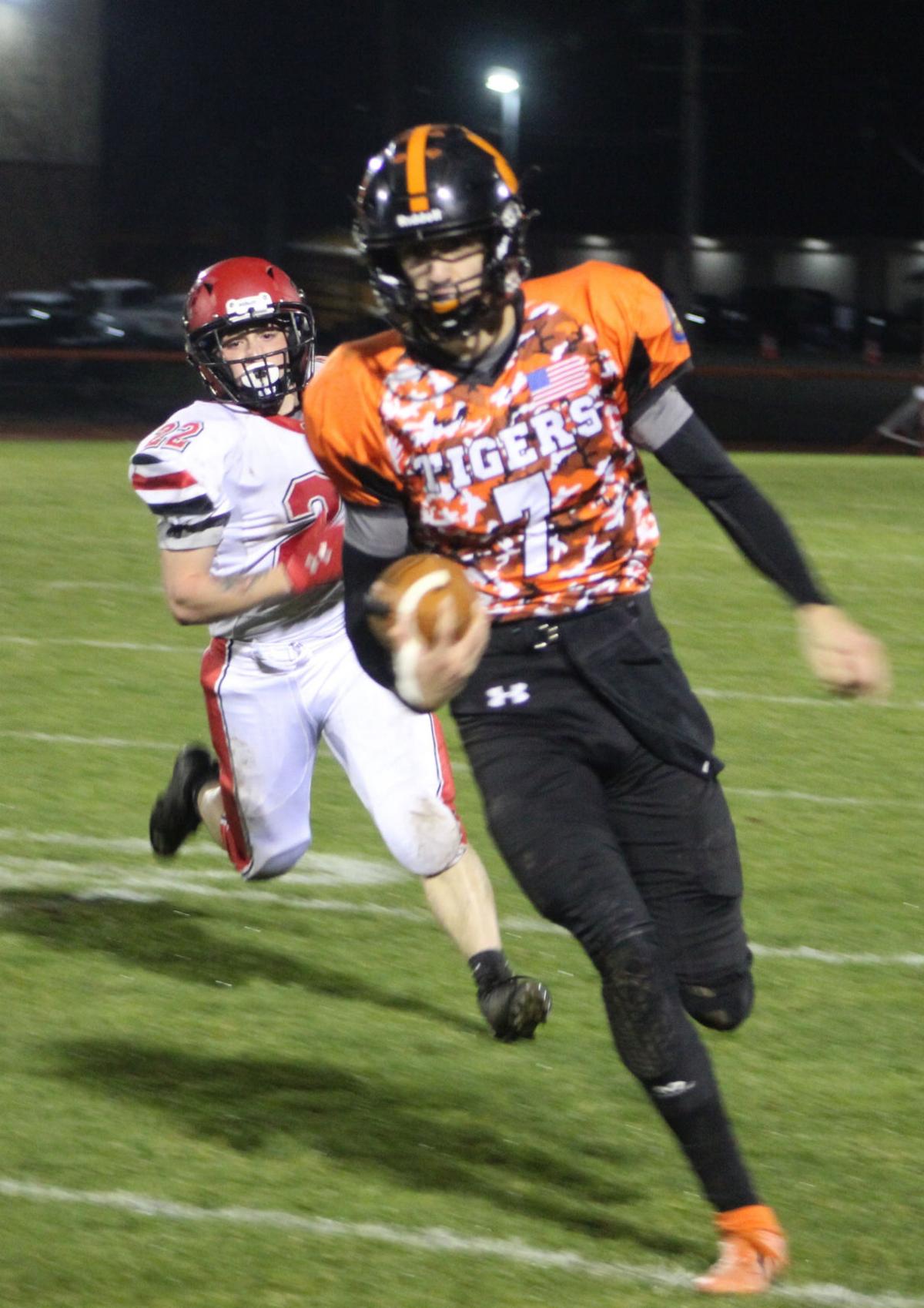 Quarterback Jack Chilson was in pursuit all night. 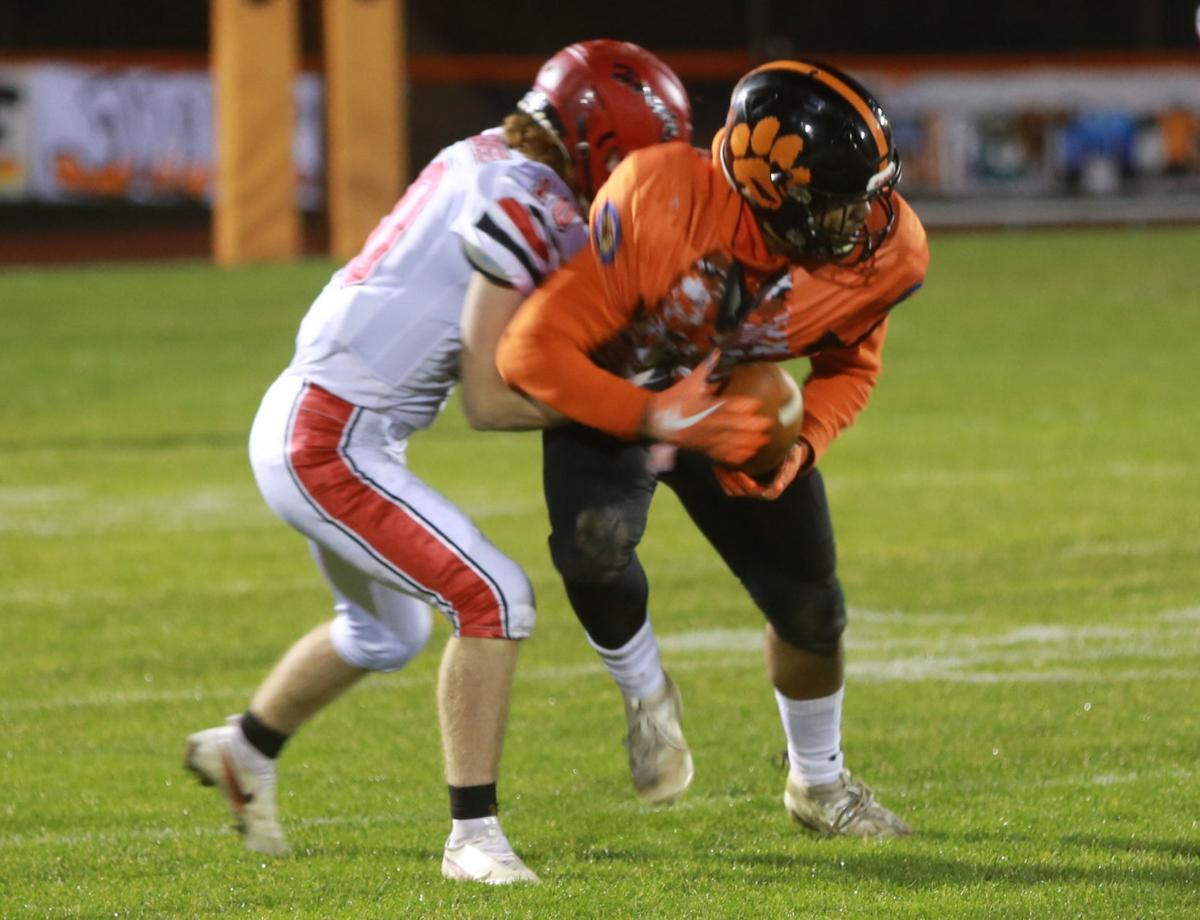 Ty Konen made some solid rushes against Honesdale Friday. 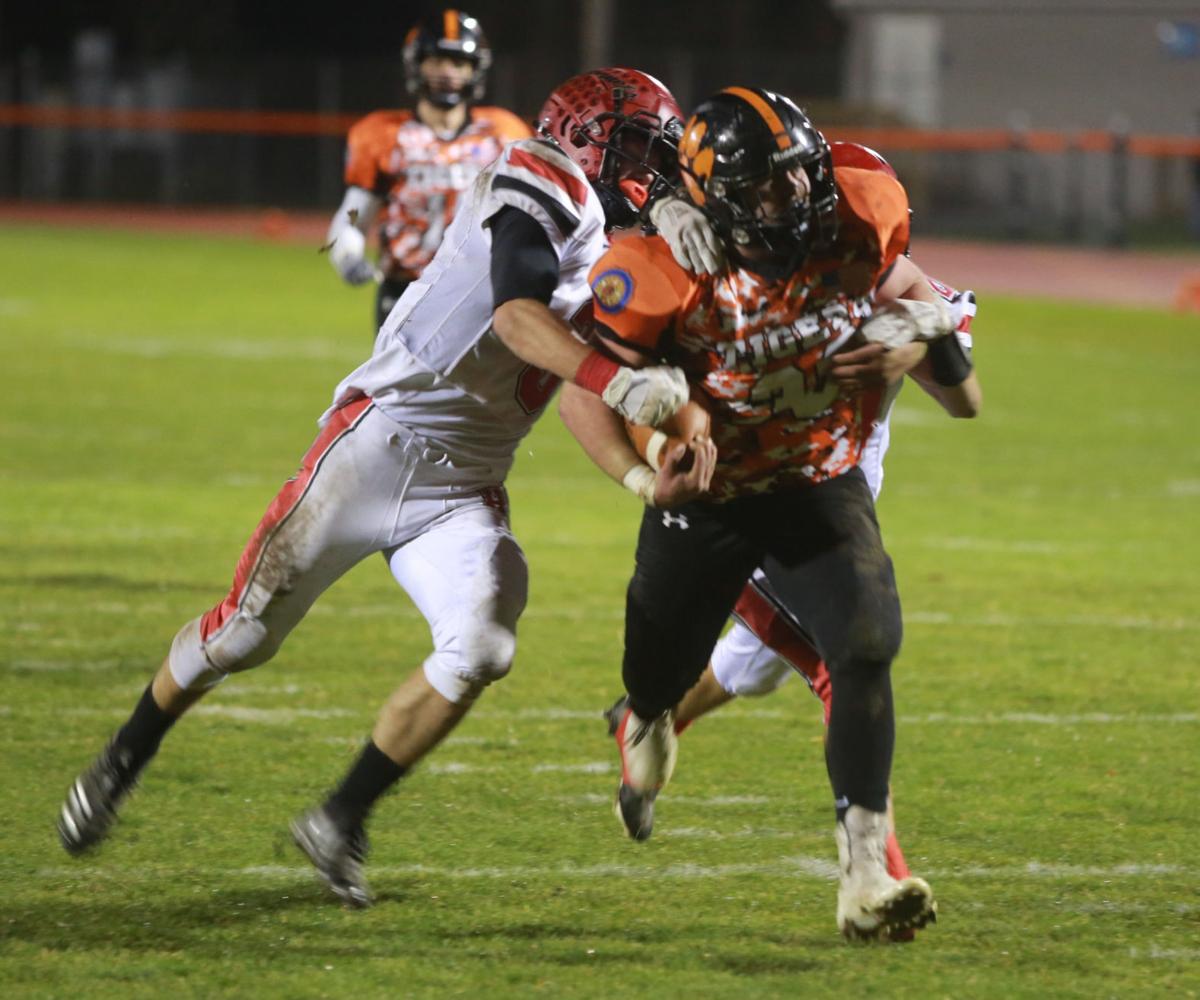 Jhamal Zacharias preserves his balance after catching a first half touchdown

Quarterback Jack Chilson was in pursuit all night.

Ty Konen made some solid rushes against Honesdale Friday.

In an emotional, at times short tempered game, at Tunkhannock’s Memorial Stadium on Friday night, the back and forth scoring that defined the first half swung the Tiger’s way with a 41-20 victory, keeping Honesdale off the board in the second.

“The emotions really were a mixture of everything tonight,” said Tiger’s head coach Mike Marabell. “These seniors wanted to leave their mark on this program, and this would have been our year, had we had a normal schedule. There were times we didn’t know who we were playing, if we were playing. The frustration of all the emotion showed up in the first half with a lot of flags.”

Clad in their camo uniforms for military appreciation night, the hometown team racked up nine penalties for 105 yards in the game, as well as having one touchdown called back.

The Tigers fell behind early, as the Hornets scored first on a Jacob Orrick 84-yard touchdown. Orrick found his way through the defense and took off.

But on the Tiger’s next drive, Ty Konen scored from 4-yards out to even the score at six.

In this physical game, Tunkhannock proved tough to take down, as at times multiple Hornets were needed to squash the Tigers game.

Tunkhannock followed up with a quick onside kick that the Hornets were not prepared for and came out with the ball, but the on field officials ruled the ball was recovered after Honesdale had already secured possession.

Hornets quarterback, senior Peter West, connected with Connor Schmitt throughout most of the game including a three yard strike for their second score of the half.

Jack Chilson, in his final game as a Tiger quarterback, took things into his own hands and walked in a one yard score, and followed it up with a two-point pass with 55 seconds remaining in the second quarter.

Following a Ben Chilson interception, and with 37 seconds remaining before the break, Jack Chilson threw a screen pass behind the line to Jhamal Zacharias. Zacharias, who has seen time in the signal caller slot, hurled a pass down field into the waiting grasp of Nate Lord- 43-yards away. Lord scored easily.

Though the play seemed to confuse the Hornets, they didn’t let off the gas, as Orrick chalked up his second TD of the night only 16 seconds later.

“That was a tough one,” Marabell said. “That was a miscommunication with us and our kicker. Our coverage went one way and the ball went the other.”

Orrick registered his punt return as a 71-yard touchdown to knot the score.

The second half was all Tigers on the scoreboard, as they put up 21 unanswered points.

Marabell said, “We did really well in the second half. No doubt about it, these guys gave everything they had in their tanks and then some.”

The coach had a heads up on the Hornets offense, as he said they knew that Honesdale was a run heavy team.

“In our film sessions, we saw that they ran the ball like 92 percent of the time, and most of the time was to Schmitt and Orrick. We knew where they were going,” he said.

Jack Chilson reflected on the four years he started for the Tunkhannock Tigers and climbed the program’s record books.

“I’m trying to soak it all in right now,” he said.

“The seasons weren’t always that great,” Chilson said. “You know, my freshman and sophomore years, we weren’t always the best team. But, this town, this team, the coaches, they always believed in us. I think that’s what I’m going to miss the most: the community feeling and the school pride that I feel is unrivaled from any other place.”

“These seniors left their mark on a program that needed it,” said Marabell. “They have had more wins in the past three years than anyone in this uniform has in awhile. They put the work in.”

He finished, “They are great kids, great humans. And that is even better. I am very proud of all of them.”