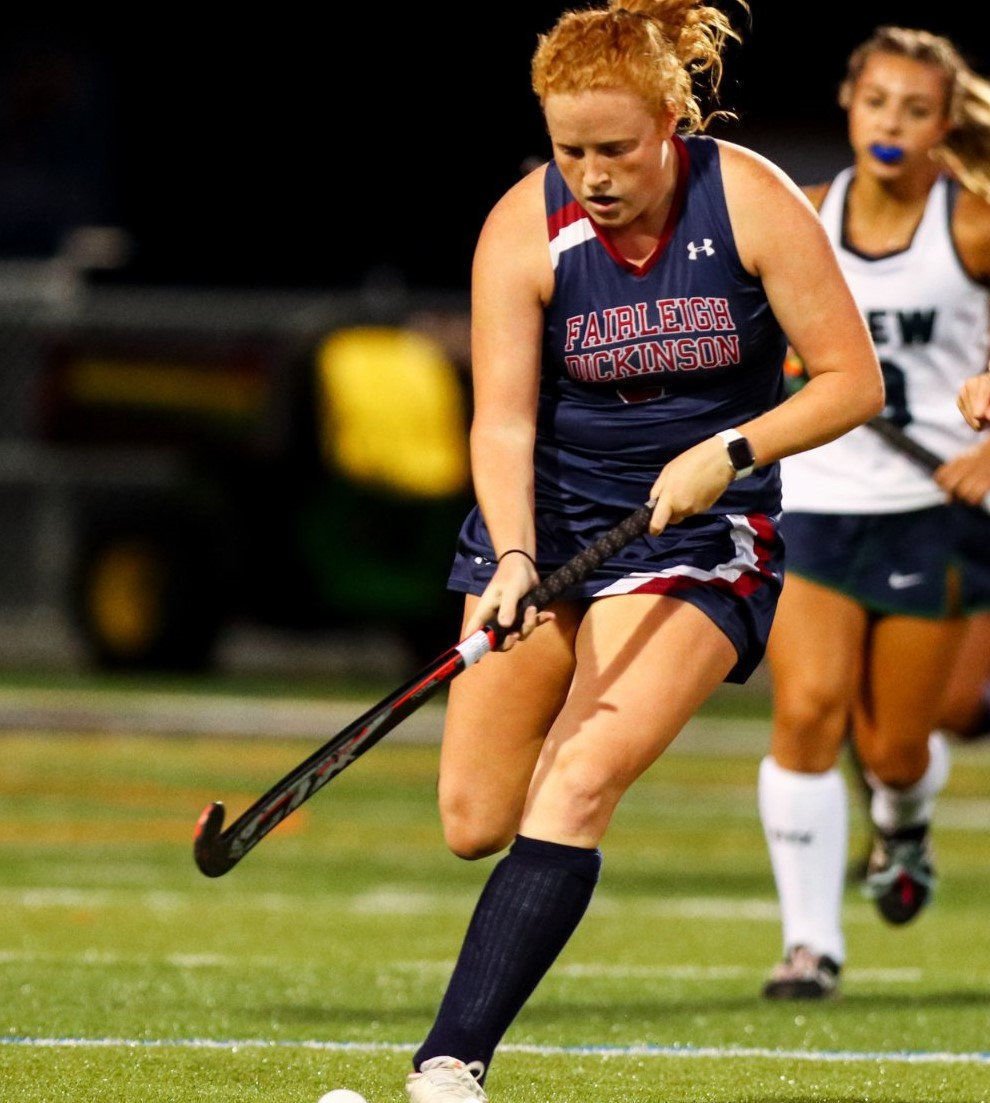 Tunkhannock’s Maggie Sohns earned a reputation as an intense field hockey player in her four years at FDU.

Maggie Sohns can go ahead and add another accolade to her already stellar senior season.

The MAC Freedom Conference Offensive Player of the Year and member of the first team All Conference squad has recently been nominated for the NCAA Woman of the Year.

Sohns recently concluded her academic and athletic careers at FDU-Florham this past spring after playing for the Tigers in high school.

“I started going to the Tunkhannock field hockey camp when I was about 9 or 10 years old, in fourth grade,” said the midfielder. “It’s always been a part of my family, but our friend Gail Perry was really the one who put the sport in my head.”

Sohns, who graduated with a double major in communications and political science said FDU was the perfect place to combine her academic and athletic passions, as well as being located just far away enough from home and close to come home when needed.

That comfort level helped her focus on being a college athlete.

“I was able to play my game, at a higher level and share that passion,” she said.

“The best part of the game, for me, is just being able to get out on the field and let everything fade away. All that matters is the ball, the stick, and the goal,” she added.

In March Sohns’ coach Moira Johnston approached her with the NCAA Woman of the Year application, and encouraged her to fill it out. From there, the process narrowed to the next round as she was selected to represent the Devils and was one of two MAC Freedom nominees.

“I never imagined I would be considered for this award, I didn’t think I did anything to qualify,” Sohns said. “I just show up and play.”

Followers of her game can be appreciative of her humility, but are quick to point out the four-year starter’s accomplishments.

In her freshman year, Sohns started her first game and never looked back.

She explained, “It was a brand new experience for me, such a faster pace, more methodical than the high school game. Though I never expected it, it was a great experience.”

Earning second team All Conference in her rookie season, Sohns was able to look at the game from a different perspective.

“High school seemed like playing was more about having fun with your team and friends,” she revealed. “But at the college level, there is more urgency to win, more direction and focus to the end goal- an NCAA Championship.”

With each additional season, Sohns added more hardware, including first team All Conference in her sophomore and junior years as well as All Region in her junior campaign.

Sohns set goals of being recognized as an All American and MAC Scholar Athlete in her first year at school, and achieved those dreams her senior year.

Her All American selection was through the NCAA coaches who look at each nominee, and the success of their team; while the MAC Scholar Athlete was awarded to her because of academic achievements. Requirements for the award include having an overall GPA exceeding 3.9.

The intense player, who was named FDU’s Female Athlete of the Year also set the single season and career records for assists as a Devil.

The school’s website says of Sohns, “She finished her career as one of the best players in FDU Field Hockey history, breaking the single season mark for assists in a season (17) and finishing third on the programs all-time list for shot attempts (255). During her 4-year career as a Devil, Sohns has helped lead FDU to 66 combined wins, including two conference championships and two NCAA tournament victories. In the classroom, she was named MAC Fall Senior Scholar Athlete, Academic All-MAC and to the MAC Academic Honor roll. On the field, Sohns was named First Team All-American, just the sixth player to do so in program history. She also earned MAC Offensive Player of the Year, First Team All-Region, First Team All-MAC Conference and a selection into the Victory Sports Tours/NFHCA All-Star game.”

On National Girls and Women in Sports Day, the New Jersey Association of Intercollegiate Athletics for Women honored female athletes from across the state of New Jersey, with a luncheon at Seton Hall University. This event recognized the outstanding achievements of female collegiate athletes, and Sohns was honored as the FDU Devils Woman of the Year.

“I am just a different person when I get on the field,” she said. “I have always tried to be a quiet leader, but my coaches and teammates wouldn’t allow it. I did become more vocal my senior season, I just let myself go. I had so much growth from my freshman through senior years, that I definitely changed.”

She continued, “I wouldn’t be the player I was without the leadership examples set by Kim Davis and Erin O’Connell, who were seniors when I was a freshman, and Mikayla Pack and Steph Noll who were sophomores when I came in. They were amazing teammates who took me under their wing and showed me how to be the player I wanted to be. They had a hand in making me the player I am.”

“She was my coach freshman through junior years, and I owe a lot of my success to her,” said Sohns.

Sohns currently helps out coaching with the NEPA Force field hockey team, and occasionally helps out with the high school team.

“I like to get out there with the teams and show them the level of intensity and speed the college games are played at,” she said. “It is so much fun to get on the field.”

“I can’t leave the game, There is no way I could walk away cold turkey. I’d love to coach, that’s the next best thing to playing,” Sohns teased.

According to the MAC website, all conference nominees are forwarded to the Woman of the Year selection committee, which chooses the top 30 honorees—10 from each NCAA Division. From the top 30, the selection committee determines the top three nominees from each Division and announces the top nine finalists in September. The NCAA Committee on Women’s Athletics then will choose the 2020 NCAA Woman of the Year, who will be named this fall.