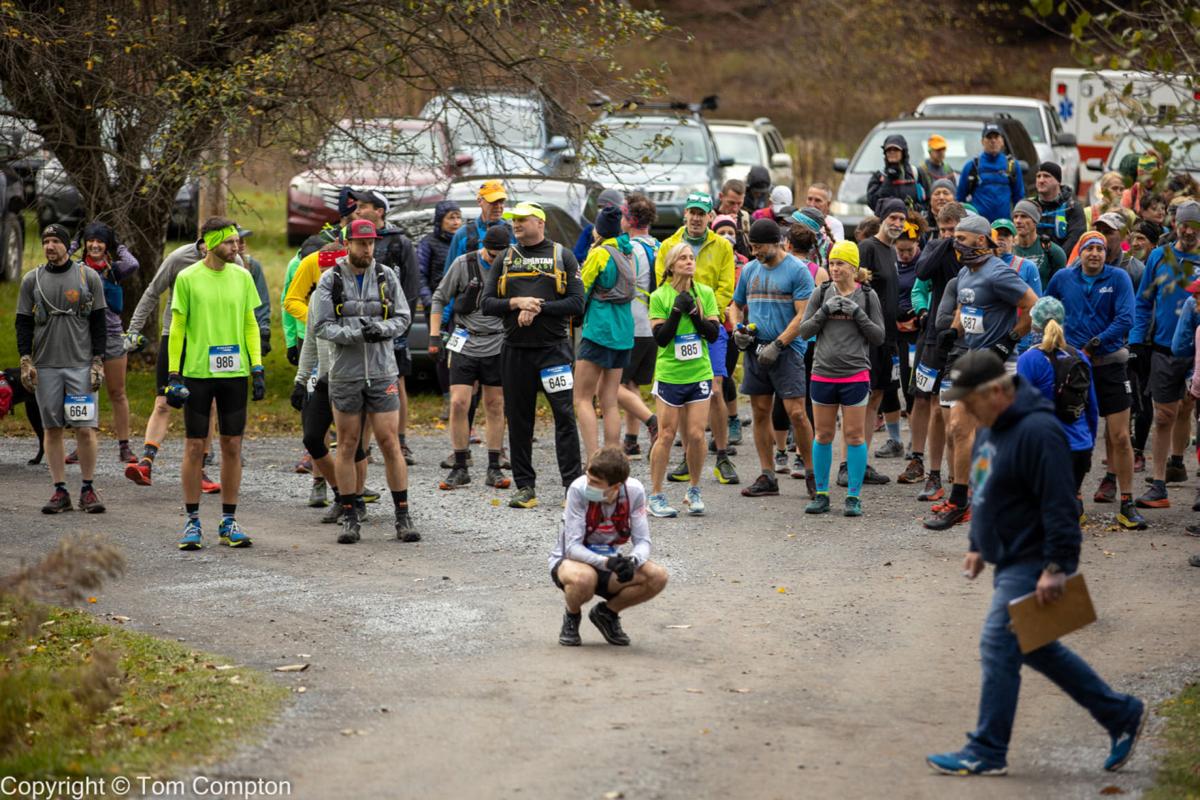 Prior to the race, Tunkhannock's Ben Robinson, center,  collects his thoughts. 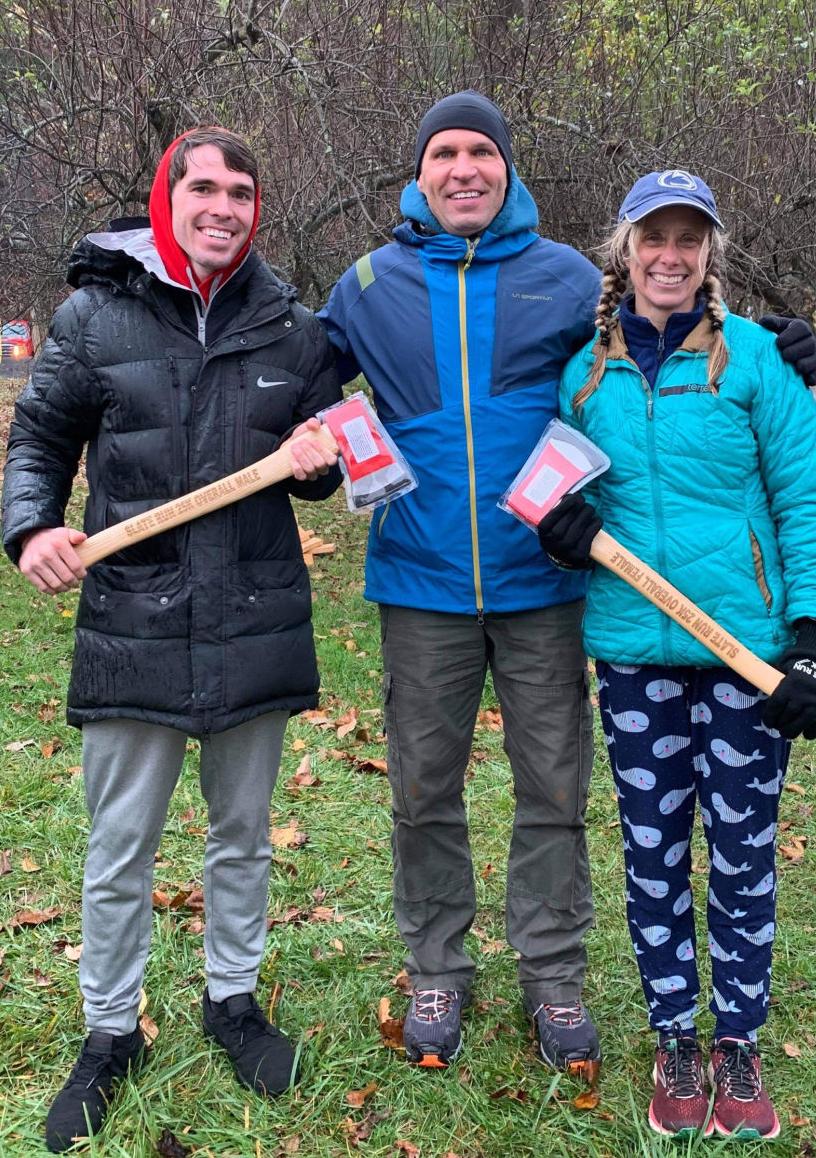 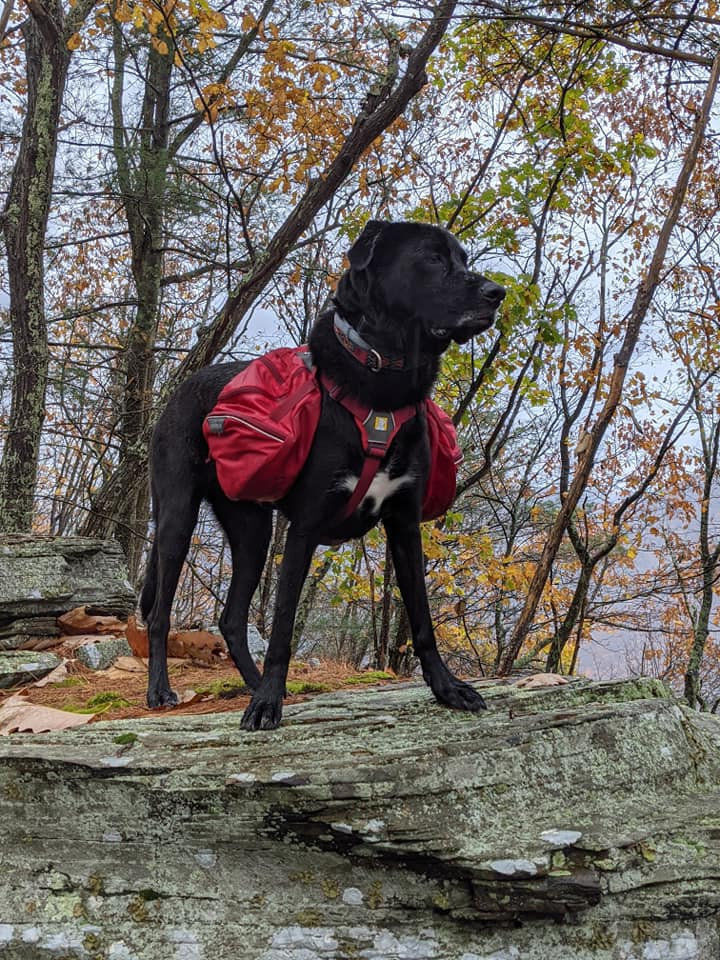 Phoebe, and her human Teresa, volunteered to be "sweepers" for the Slate Run, and were pleasantly surprised with the lack of debris left of the trails, maintaining the integrity of the forest.

Prior to the race, Tunkhannock's Ben Robinson, center,  collects his thoughts.

Phoebe, and her human Teresa, volunteered to be "sweepers" for the Slate Run, and were pleasantly surprised with the lack of debris left of the trails, maintaining the integrity of the forest.

The foliage in Pennsylvania is something people travel from all over to witness.

The Black Forest Trail in north central Pennsylvania’s remote and rugged mountains of Tiadaghton State Forest was the setting for the Slate Run, a 25K trail race. The course took runners through the Algerine Wild Area and Red Run sections of the Black Forest Trail that are full of technical single track, streams, and awesome vistas.

And just as the changing of the seasons is inevitable, as is Tunkhannock Area graduate Ben Robinson taking part in a challenging race.

Robinson, 26, not only took part in the event, but placed first overall in two hours, three minutes, and 47 seconds, shattering the course record by more than eight minutes. The previous record was set last year by Matt Lipski, who ran it in 2:11.

As the only racer from Wyoming County in this year’s race, Robinson said he was first attracted to the race because it allowed him to run on the iconic Black Forest Trail.

“I usually race all over the state, but this year has been tough,” said Robinson, a championship runner at Lock Haven. “This was only my third race this year. Normally, by this point of a year, I would have travelled to multiple states, and I try to get to Europe at least once a year.”

The COVID-19 pandemic not only impacted his race locations, but his race attire, as he raced with a mask on for a portion of the 25K Slate Run.

He said, “I wore the mask when everyone gathered at the start, and took it off about a quarter mile into the race when people spread out.”

“Ben fits right in with our running community, he is so friendly and encouraging,” said race director Craig Fleming. “Usually after a regular race, the runners leave after they cross the line to get messages or take an ice bath. But Ben is so humble, no matter what place he finishes in, he is always hanging out at the finish line encouraging those still racing.”

“I have know him for a few years, and I think this action really shows what type of person he is,” added Fleming.

Robinson not only had to battle the competition, but the weather was a test as well.

Trail running, by definition, is a sport-activity which combines running while maneuvering steep gradients, and includes some hiking. It is run on any unpaved surfaces.

“Surprisingly, the temperature was good for racing, but everything was so wet,” he explained. “The big boulders were slick and there were some downhill sections that were really wet.”

He also pointed out that the fallen leaves were “super slippery and made the trail more sketchy.”

James Compton, a racer that also took part in the Slate Run, said the course is a favorite amongst runners because it offers remoteness, challenging terrain, great people, and testing geography.

Compton added, “The challenge and uniqueness of this trail- you can even camp out the night before at the trail- is what keeps people coming back.”

Robinson is currently training for his next contest- an upcoming 50-mile race in Maryland.

“I am really looking forward to it,” he said happily.

When asked how a runner prepares for a distance that overwhelming, he replied that a race of that caliber is more mental than physical.

“At this point, I have been running since I was 14 years old. I need to push further than I ever have before. This will be a whole new experience, and I am excited about it,” said Robinson.

Robinson acknowledged that his running career has been an uphill progression, as when he started out in his orange and black days, “running was certainly not a natural thing for me.”

“My early days were pretty ugly,” he laughed. “I have been pretty fortunate that I have been injury free and able to put in the work needed to be at the top.”

He concluded, “I really enjoy trail running, and hope to continue to do these runs for many, many more years. It makes me happy.”

PA Trail Dogs is the group responsible for organizing the races. The group, led by Fleming, began building and maintaining trails back in 2006 in Sproul State Forest under the guidance of PA DCNR and The Nature Conservancy.

The Slate Run prides itself on truly caring about and maintaining the trails, as well as the integrity of the forest.

“We have put in about one thousand man hours on the trails to clean, maintain, and build them. Our runners give back to the sport,” said Fleming. “The really neat thing, too, is that all our members run the race. We really just put the races on for ourselves to enjoy. It is great we can share it with other race enthusiasts, but we organize, staff, and run in the entire race.”

Fleming, who finished 34th, said the PA Trail Dogs volunteers share their passion for trail running from registration, handing out bibs, manning the aid stations, taking photos, and volunteering to be a sweeper.

According to a post on the race’s Facebook page, they enlist the help of both two- and four-legged helpers after the race to volunteer for the sweeper position. This selfless volunteer hangs back at the end of the race, and goes last. Their primary responsibilities include checking to make sure no one is hurt, reporting to the aid and check stations that all participants finished the race, and pick up any traces of the race.

This race only turned up one candy wrapper after the registered 150 trail runners went through.

“And I honestly believe that was an honest mistake,” said Fleming. “I think someone might have been fiddling in their pocket and it either slipped out, or with the weather being damp, it simply missed the pocket itself.”

Robinson commented, “I love the trail running community’s commitment to be environmentally conscious, it really is a tight knit group. We are all out in the woods, enjoying it, so we want to make sure it is a better place.”