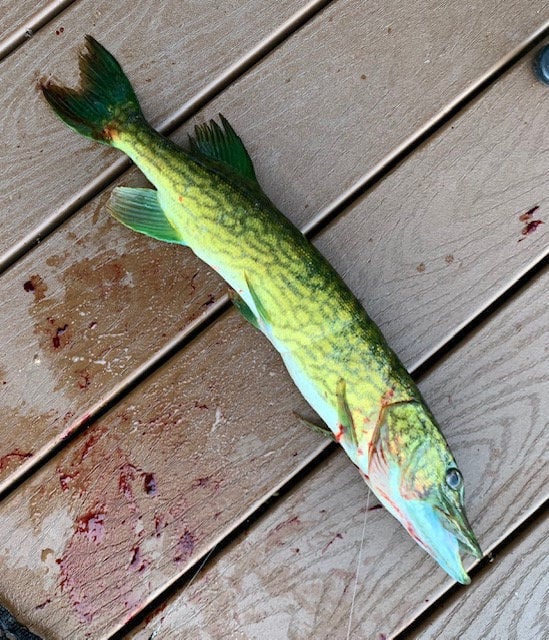 Jim Marino caught an extremely rare blue chain pickerel in Saddle Lake, a private lake in Tunkhannock. The fish measured in at about 19 inches, and was returned to the water after documentation. 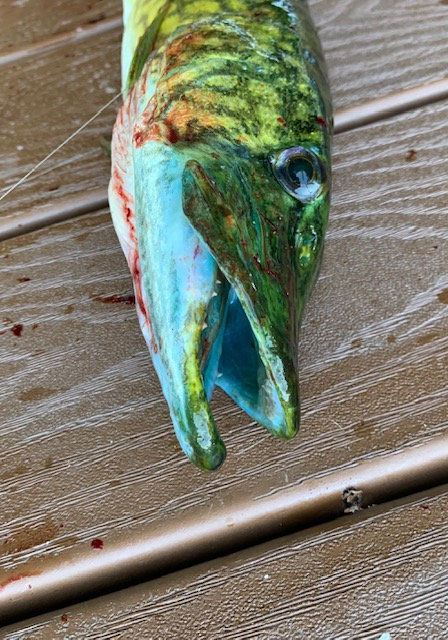 The pickerel Jim Marino caught in Saddle Lake had a rare blue coloring to it. 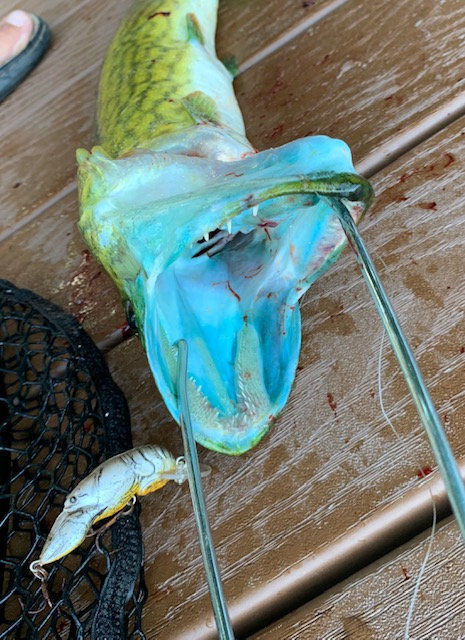 The coloring of the blue pickerel caught in Saddle Lake continued throughout the fish's body. 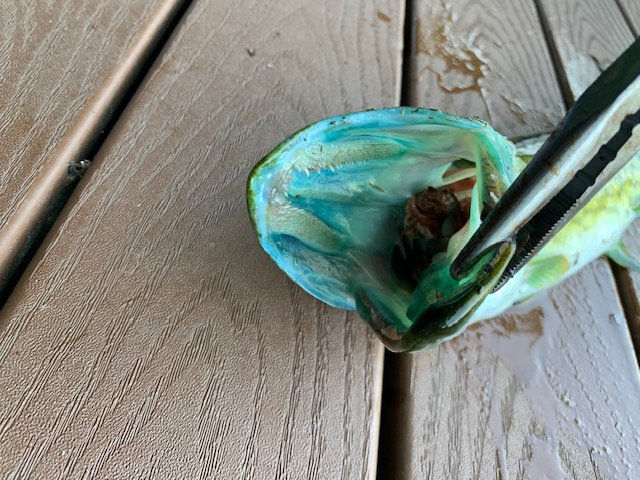 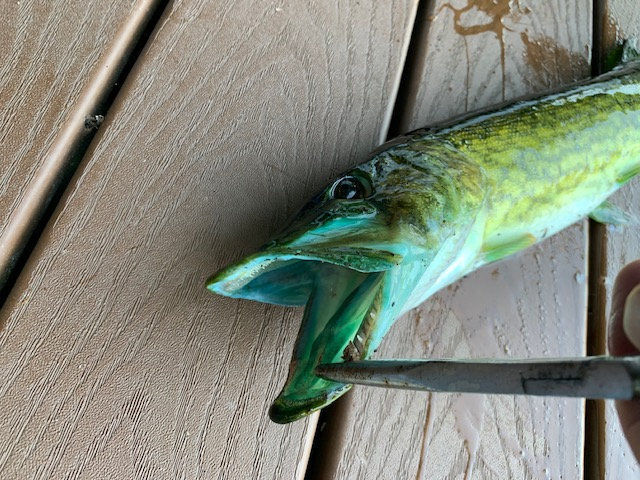 The rare fish was returned into the lake after being documented.

Jim Marino caught an extremely rare blue chain pickerel in Saddle Lake, a private lake in Tunkhannock. The fish measured in at about 19 inches, and was returned to the water after documentation.

The pickerel Jim Marino caught in Saddle Lake had a rare blue coloring to it.

The coloring of the blue pickerel caught in Saddle Lake continued throughout the fish's body.

The rare fish was returned into the lake after being documented.

Jim Marino gets out on Saddle Lake as much as he can to fish.

The retired postal service worker tries to get out on the water in the morning in his kayak, and in the evenings he goes out on his dock to catch a few more hours of precious daylight before calling it a night.

Marino hauled in a 19-inch blue pickerel, a fish with a rare color scheme and markings.

It is so rare, that Pa. Fish and Boat Commission Fisheries Biologist Aaron Frey has only heard of two other blue pickerel catches, one in 1997 and another in 2007.

“It is extremely rare,” said Frey by phone on Friday. “I have never seen one in person, it sure is cool looking though.”

Marino said he goes out for bass in the private lake in Tunkhannock, but knows there are a lot of pickerels in there too.

“Once I caught it and started to bring it up, I thought it was just another pickerel,” Marino recounted. “Then as it got up, I saw it was blue. My first thought was there might be an oxygen problem.”

He used a two-inch silver and orange crayfish lure to snag the fish, and the conditions on the lake were warm and muggy.

“In my 45 years of fishing, I had never seen anything like this at all,” said Marino. “I sent pictures to everyone I knew and they were all blown away. Once some of those seasoned fisherman said they never saw anything like it either, I knew it was something unique.”

Frey cited an article from the Morning Call in 1997 referring to Jim Miller’s similar catch 23 years ago at Promised Land Lake in Pike County. Miller contacted the Pa. Fish and Boat Commission about the strange occurrence and received a reply from Biologist Bob Lorantas. Lorantas said the blue “color mutant” in pickerel has been described in scientific literature and was first reported from a small New York lake 25 years earlier.

Frey echoed that statement, agreeing, “We think it is a genetic mutation specific to the chain pickerel. It would be considered along the same lines as albinism, solely affecting the coloring. They are otherwise the same fish.”

Chain pickerels are common members of the pike family which are found in numerous Pocono Mountain lakes and in some Lehigh Valley area waters into which they’ve been stocked. The pickerel is normally greenish-bronze with chain-like markings on its sides.

Frey explained that there is a strain of walleye that are called blue walleye up near Lake Erie, that has been extirpated. Extirpated species are a local extinction when a species no longer exists in a particular area but still exists elsewhere.

“Sometimes yellow perch can also be blue,” he explained.

As for Marino, he returned the fascinating fish to Saddle Lake after documenting it.

“I wasn’t looking to go out for anything remarkable, I was just hoping to get a bass,” he laughed. “And then I got this.”

“I would guess that is the only one in there,” said Frey. “But it is certainly a once in a lifetime occurrence. It looks so cool.”