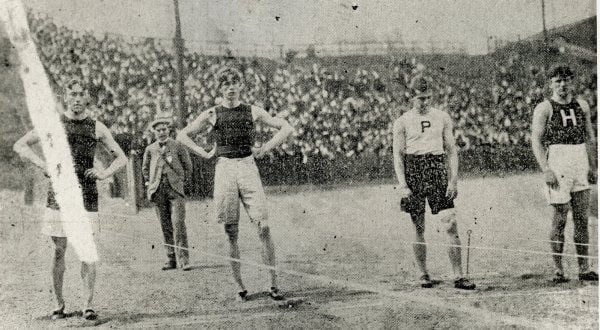 With his arms on his waist, Walter Tewksbury readies for a heat in the 100 meters of the 1900 Olympics in Paris, France. 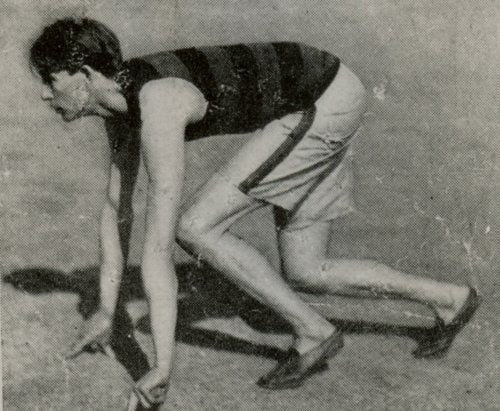 Walter Tewksbury prepares himself for a sprint. Representing the University of Pennsylvania, he was intercollegiate champion in the 100 and 220 yard dashes in 1898 and 1899, and topped the 200 meter field at the 1900 Olympics.

With his arms on his waist, Walter Tewksbury readies for a heat in the 100 meters of the 1900 Olympics in Paris, France.

Walter Tewksbury prepares himself for a sprint. Representing the University of Pennsylvania, he was intercollegiate champion in the 100 and 220 yard dashes in 1898 and 1899, and topped the 200 meter field at the 1900 Olympics.

In early July of 1900, Tunkhannock resident Walter Tewksbury arrived in Paris destined to compete on the world stage in five track & field events. The following finishes were culled from newspaper dispatches of an eventful nine days in Paris.

The final heat in the 100 meters was won by Jarvis in 11 seconds, with Tewksbury two feet behind for second and Pritchard just behind less than two inches for third. Second Place.

Tewksbury ran in the first heat, on Saturday, July 14, at 61 seconds besting American William Lewis. In the second heat, Henri Tauzin, who had held the French record for years, was considered a sure winner in the event, and had no problem in his heat. But on the next day, Lewis refused to compete in the finals because it was on a Sunday. Tewksbury jumped out to an early lead and was never headed. He took first in 57.6 seconds, with Tauzin finishing five yards behind him in second, and George Orton of Canada four yards behind Tauzin in third. First Place.

On Monday, July 16, the 200 meter hurdles pitted two University of Pennsylvania teammates and Norman Pritchard of India. In the first heat Alvin Kraenzlein of Penn came in first. In the second heat Pritchard came in first with Tewksbury finishing two yards behind him in second. In the finals, Kraenzlein was first in 25.4 seconds, with Pritchard five yards behind, and Tewksbury a yard behind Pritchard. Third Place.

In the second heat in the 60 meters on July 16, Walter Tewksbury managed to breast the tape just ahead of Stanley Rowley of Australia in 7.2 seconds. Penn teammate Alvin Kraenzlein took the first heat in 7.0 seconds, a half yard ahead of Edmund Minahan of Georgetown. One dispatch called the finals “a pretty contest,” the men being breasts apart at the finish, with Kraenzlein first in seven seconds, Tewksbury second, and Rowley third. Second Place.

The world’s amateur championship contests in connection with the Paris exposition came to a conclusion on July 22. Thirty entries were received for the 200 meter flat race, but only eight went to the starting post. In the first trial heat, William Holland of Georgetown bested Norman Pritchard of India in 24.0 seconds. In the second heat Stanley Rowley of Australia won in 25 seconds with Tewskbury just a foot behind for second. The finals gave America her only victory of the day, and a dispatch in the Scranton Times labeled the contest “a magnificent tussel between Tewksbury, Pritchard and Rowley.” Tewksbury took the lead past the halfway point and beat Pritchard by two and a half yards in a time of 22.2 seconds. Rowley was another half yard behind for third. First Place.