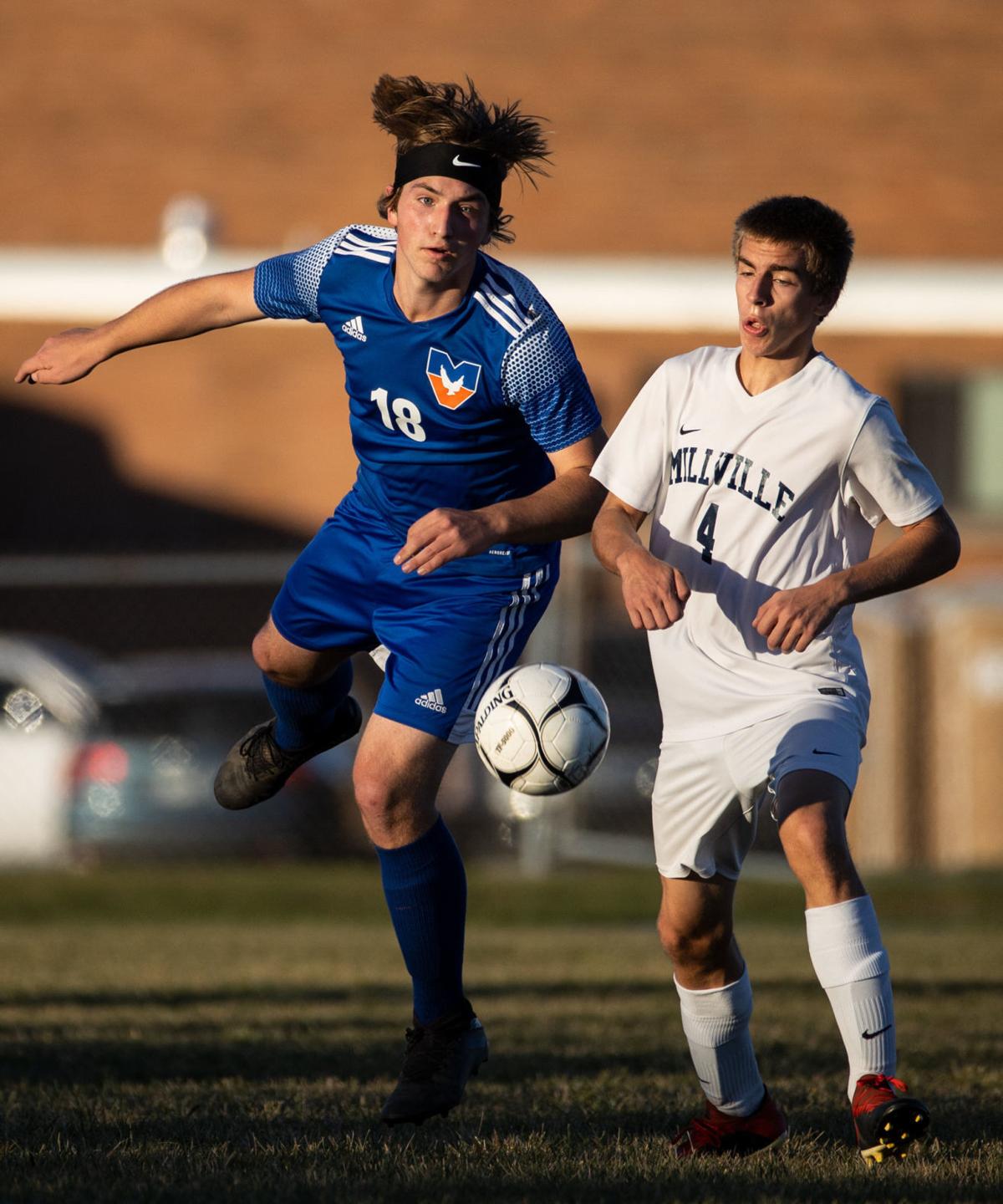 Mountain View’s Caleb Eichelberger sends the ball past Millville’s in the PIAA Class 1A first round soccer game in Kingsley last week. 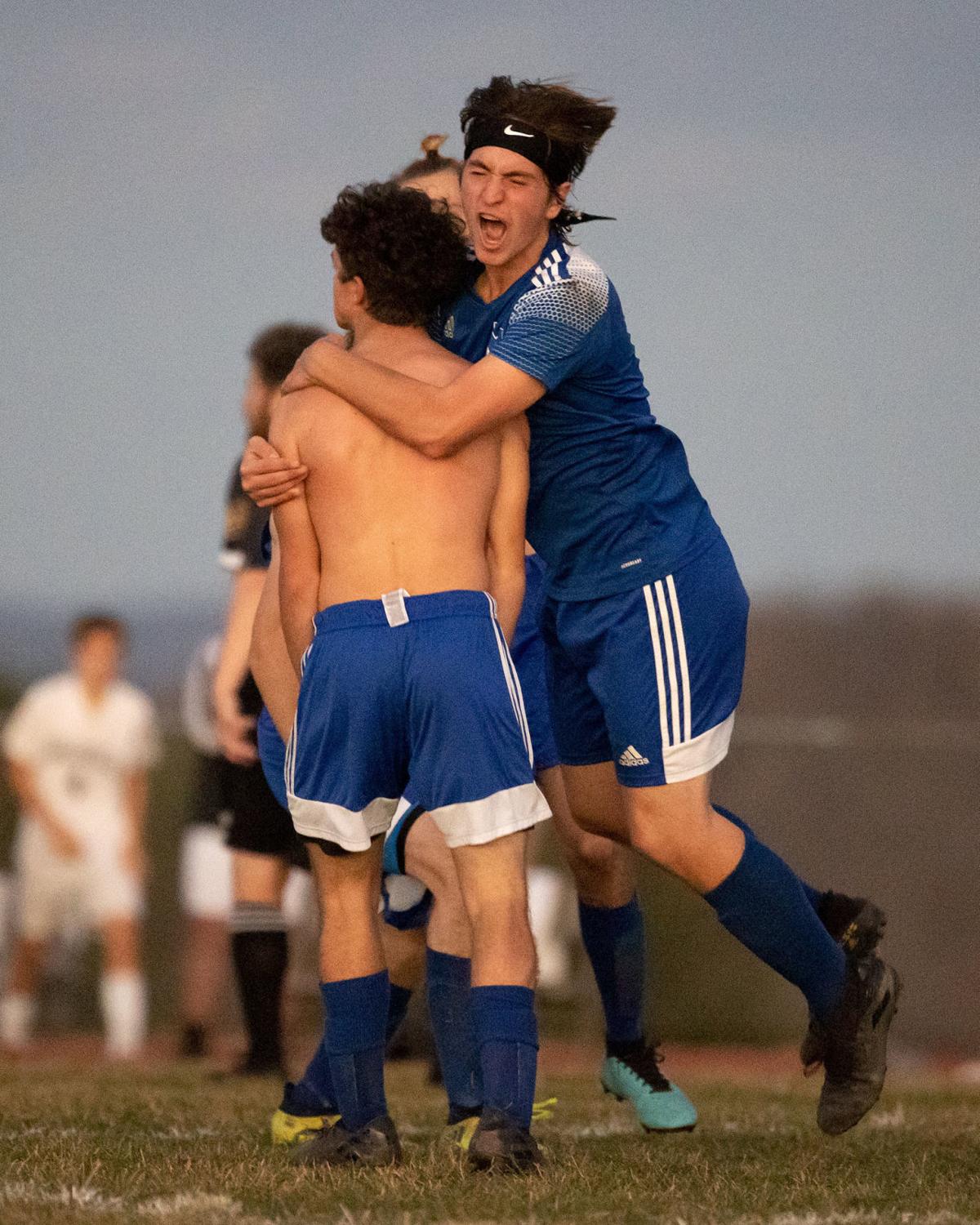 Mountain View’s Caleb Eichelberger, right, hugs Ben Demark after Demark kicked the final goal in a shootout for a 5-3 win over Millville in the first round of postseason play. The Eagles advanced, but were stopped by Tulpehocken on Saturday.

Mountain View’s Caleb Eichelberger sends the ball past Millville’s in the PIAA Class 1A first round soccer game in Kingsley last week.

Mountain View’s Caleb Eichelberger, right, hugs Ben Demark after Demark kicked the final goal in a shootout for a 5-3 win over Millville in the first round of postseason play. The Eagles advanced, but were stopped by Tulpehocken on Saturday.

No drama. No last-second heroics.

Behind four goals from Lucas Forry, the Trojans struck for three scores in the opening 14 minutes to defeat District 2 champ Mountain View, 6-0, and advance to the state semifinals, ending the Eagles’ unlikely postseason run.

“Beginning the season, we weren’t supposed to make it past the first round of districts,” said senior goalkeeper Connor Richmond, who was peppered with 27 of Tulpehocken’s 30 shots. “It’s just been amazing. From freshman year to go here, sophomore and junior year to be down, and then senior year to be right back in this position, it’s nice to get this far but you always want more.”

The Trojans would have no part of that, dominating possession with pinpoint touches that gave them the lead less than 2½ minutes into the game on their home turf.

“They’re good. They’re good and you know, there might be other good teams out there, but they certainly have the caliber of a state champion,” Mountain View coach Roger Thomas said. “It’s probably the best single flowing team, but with purpose.

“There’s some teams that pass for the sake of passing. This team passes for the sake of penetrating and scoring and so it’s really a pretty thing. I mean they did a similar thing to Camp Hill, and who was seated above them (in the District 3 final), and they just took us apart, and we didn’t have answers to the speed and control.”

Mountain View (12-2) was in an early hole, but the Trojans (15-3-1) were relentless, adding two goals in less than two minutes to break it open early.

“Everything goes through feet,” Thomas said. “Everything goes to the open man, and then they don’t try to score themselves, but they play the ball across the goal and come from different angles.”

“Pretty rare where Connor overplays the post,” Thomas said. “And the guy happens to tap it back across. So, the first two you could consider odd goals, but after I don’t think there was one that Connor really had a chance on.”

Richmond came up with 12 saves in the game or the damage could have been much worse.

“It felt like the whole game they had more men on the field than us,” Richmond said. “When we would clear it and think it’s going out, and then a guy just pops up and dribbles it in. They were just so quick. They’ve dribbled around us and just we’re getting open shots.”

Nothing the Eagles had seen in league, district, or the first round of states compared to the speed and skill, with Forry going far post from 12 yards to make it 4-0 just three minutes into the second half.

“They’re good,” Thomas said. “They have the privilege of playing on this perfect turf and they have basically adapted to the environment and the coaches coaching very well.

“It’s because their passing is so precise and they’re shooting from different angles. So Connor has the near post, that’s fine. They pass it to the back post. A very good team. I wouldn’t be surprised if they end up state champs.”