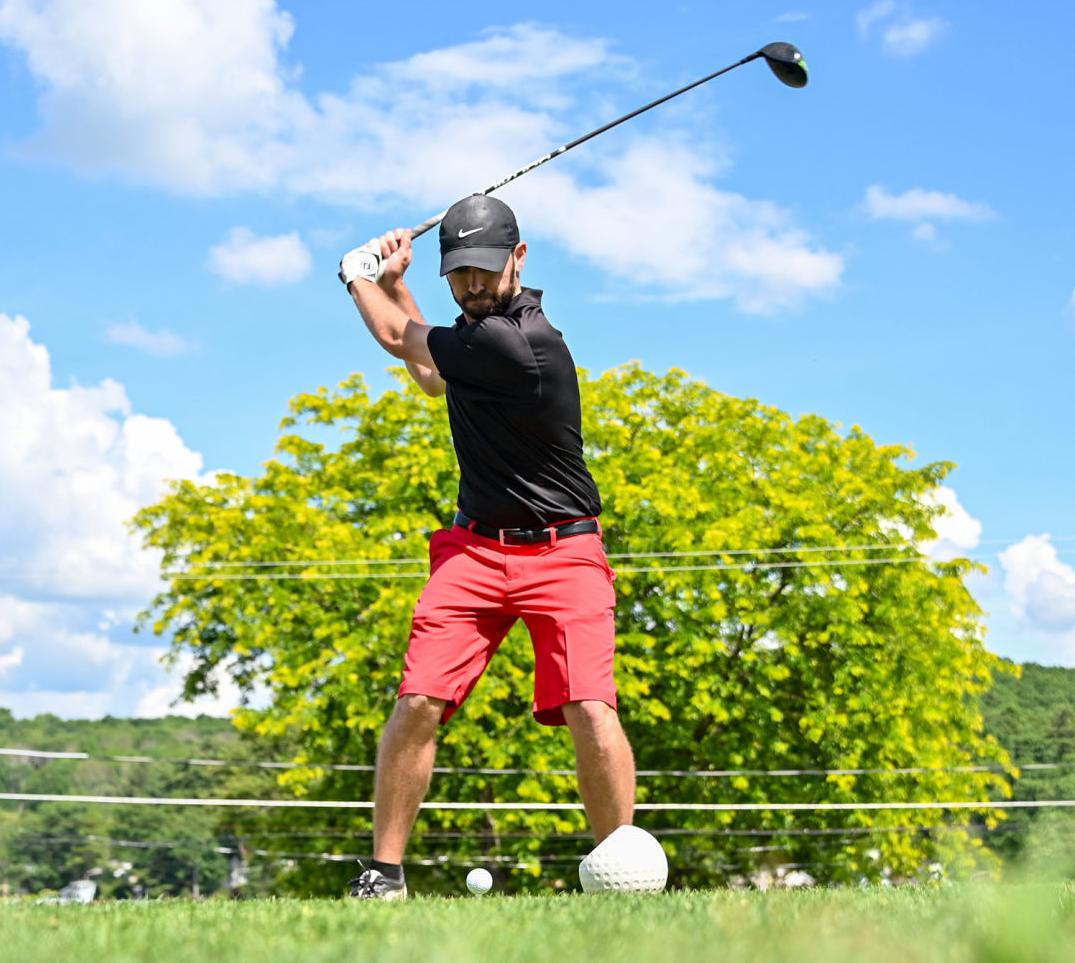 Billy McDermott tees off during the member-guest championship match at the Scranton Canoe Club on Sunday. 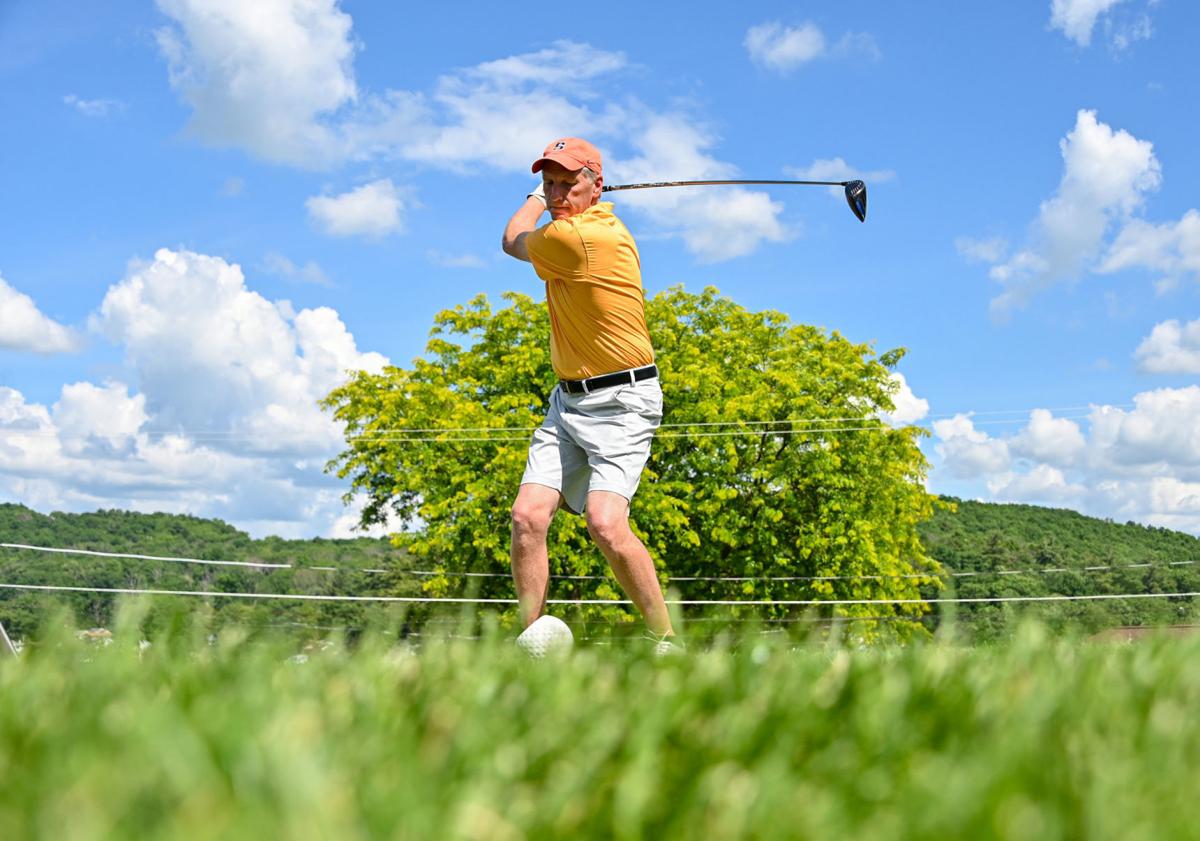 Bill McDermott tees off during the member-guest championship match at the Scranton Canoe Club on Sunday.

Billy McDermott tees off during the member-guest championship match at the Scranton Canoe Club on Sunday.

Bill McDermott tees off during the member-guest championship match at the Scranton Canoe Club on Sunday.

No need to ask Bill McDermott what he wants for any future Father’s Days.

Sunday brought him the best gift of all.

Teaming with his son, Billy, the father-son duo captured the Canoe Club member-guest championship, rallying for a 2 and 1 victory over Barry Westington and Brian Corbett to cap Father’s Day weekend.

“It’s awesome,” Billy said. “We played in this tournament for four or five years now. My dad had my brother, Ricky, on the bag. My mom (Marci) was pushing my cart around. Having the whole family on the bags and all of us there, it honestly can’t get any better than that. A great Father’s Day weekend here.”

It also didn’t hurt that both McDermotts hit key shots at important times, especially after a spotty front nine that saw Westington-Corbett grab a 2-up lead through six holes.

Westinghouse saved par on No. 5 with an uphill 4-foot comebacker to win it. Corbett followed by playing the perfect approach to the par-4 sixth, leaving himself a slippery 4-footer, which he coaxed into the hole for a birdie and a 2-up lead.

“We felt the momentum switch there,” Westington said. “It was just a crazy front side. Not really great golf. I think we tied one hole.”

Both McDermotts parred No. 8 to cut the lead to 1-up, then Billy drove No. 9 and made birdie to square the match.

“This hole is a really hard hole and they made a really nice par here to cut the lead to one, and then Billy drove the green on 9,” Corbett said. “Now we’re back in the match and they got a good break on No. 1 when he probably should have hit it out of bounds.”

Billy McDermott’s drive on the 311-yard ninth finished just 20 feet from the cup, and his two-putt tied it through nine.

“At that point, that’s where all the momentum in the match is going to change, based on those two holes,” the younger McDermott said. “Making a birdie on 9, we have everything going good for us and we’re where we have to be.”

That nearly changed with one swing. Billy McDermott’s tee shot was hooking out of bounds when it struck a tree at the boundary and dropped straight down, and in play. More importantly, it left him a shot — albeit a difficult one — to the green.

“I don’t think it could have gotten much better or lucky,” Billy McDermott said. “Having a shot from that and being able to put it up on the green after it hits the tree, you can’t get any luckier I don’t think than that one.”

He made par and the match moved to the 11th still tied, but Bill McDermott’s 85-yard wedge shot stopped 2 feet away for birdie and gave the McDermotts their first lead of the match.

“That’s such a pivotal hole here,” Bill McDermott said. “Billy got his on the green and I was able to follow it up with a good shot. That’s where a lot of matches turn here.”

It continued the second and final momentum shift.

Par secured the champs another win on No. 13, and Billy McDermott stuffed his tee shot on No. 15 inside 3 feet, rolling in that birdie for a 3-up lead. In a seven-hole span, the McDermottts won five of them.

“It got crazy on the back,” Westinghouse said. “They got hot and we couldn’t get our breath. You’re tired, you’re waiting on shots. It felt like it broke us down. We had a good tournament.

“I’m happy for a father-son team to win. There’s always other years.”

Westington had his short birdie conceded on No. 6, but he and Corbett couldn’t get any closer, and when Corbett’s 4-footer to extend the match on No. 17 snapped past the cup, Bill McDermott had his first win in three finals.

“It was so cool to be with my family, watching them stand together, my boys, and watching my son play so well,” Bill McDermott said. “It was fantastic. I couldn’t ask for anything better. I can’t even put it into words.”