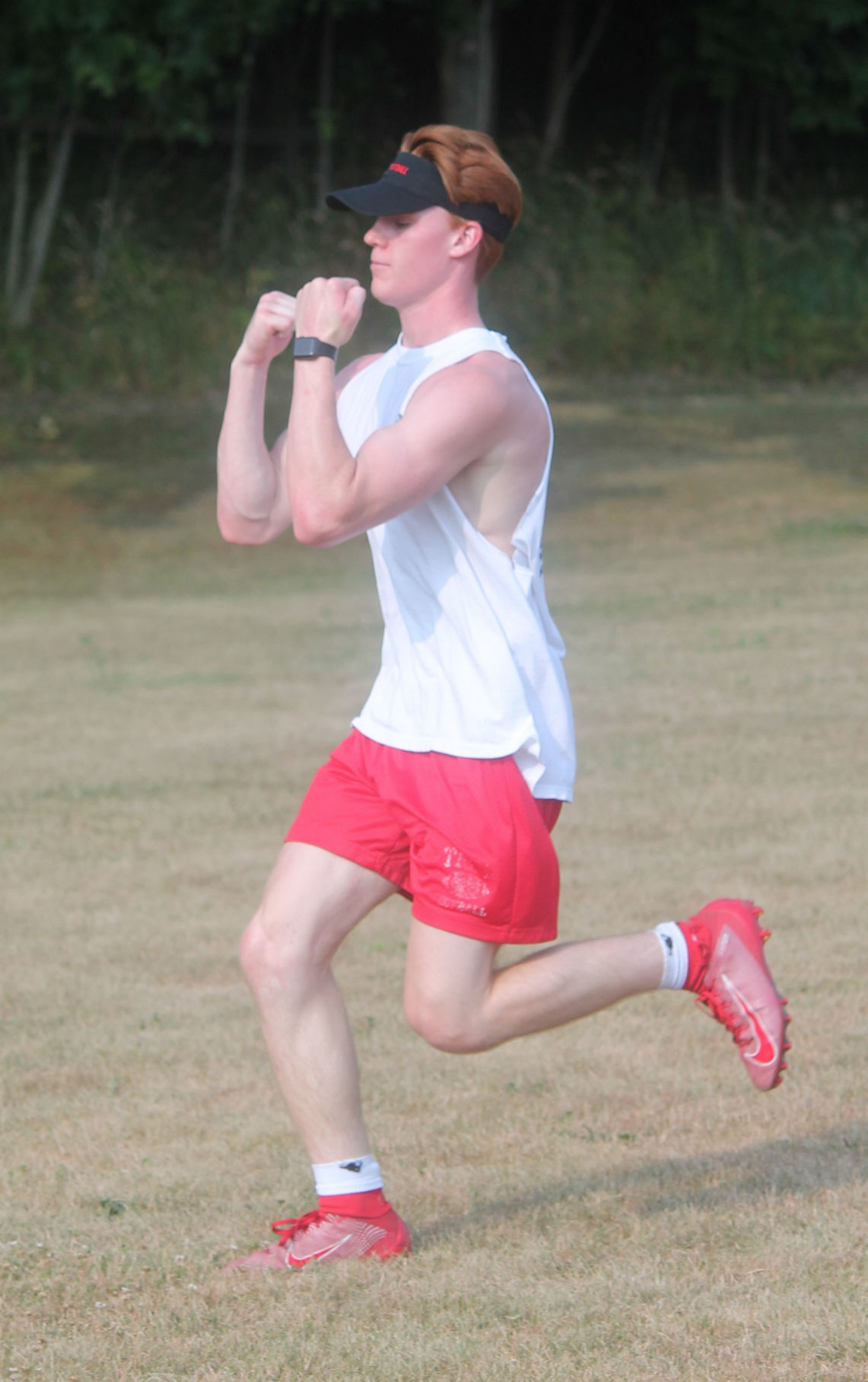 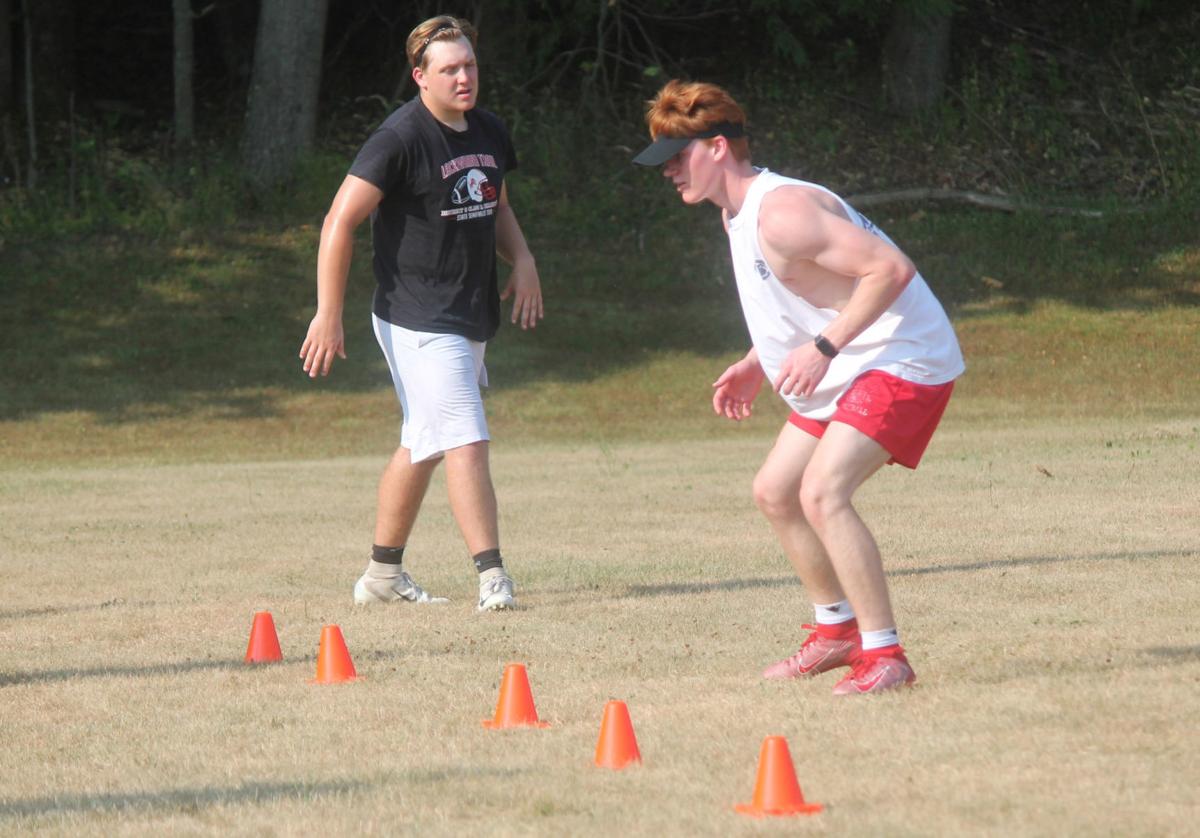 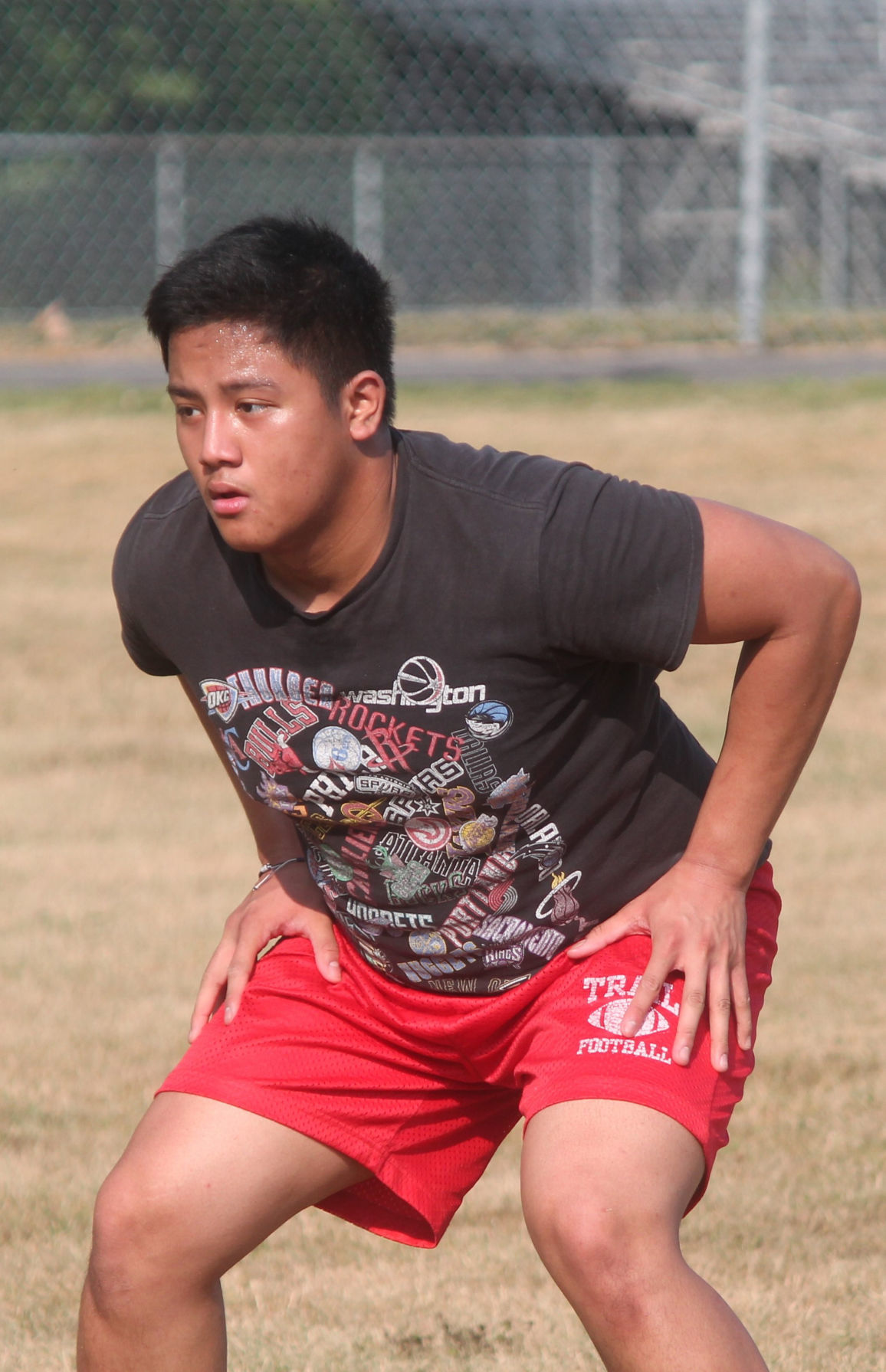 Johann Ella crouches during a lineman drill on Thursday. 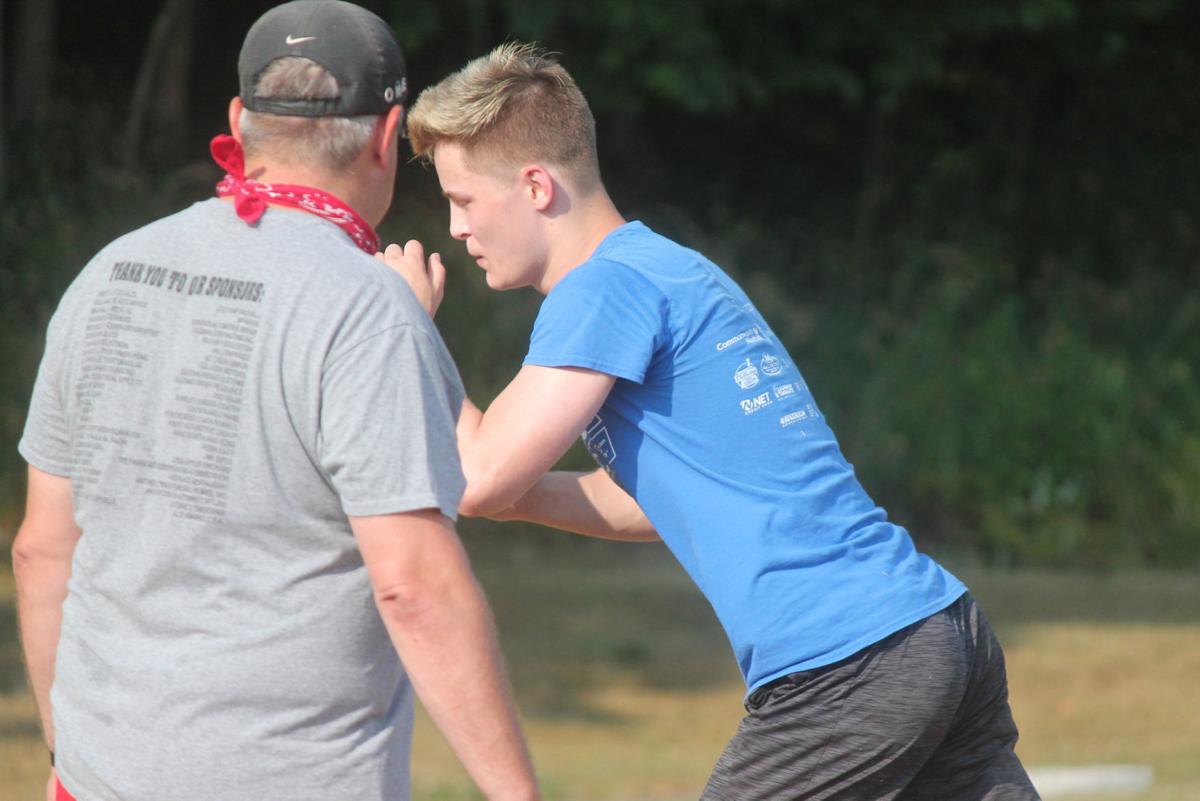 Dalten Klinges runs through a blocking drill with Coach Kalinoski. 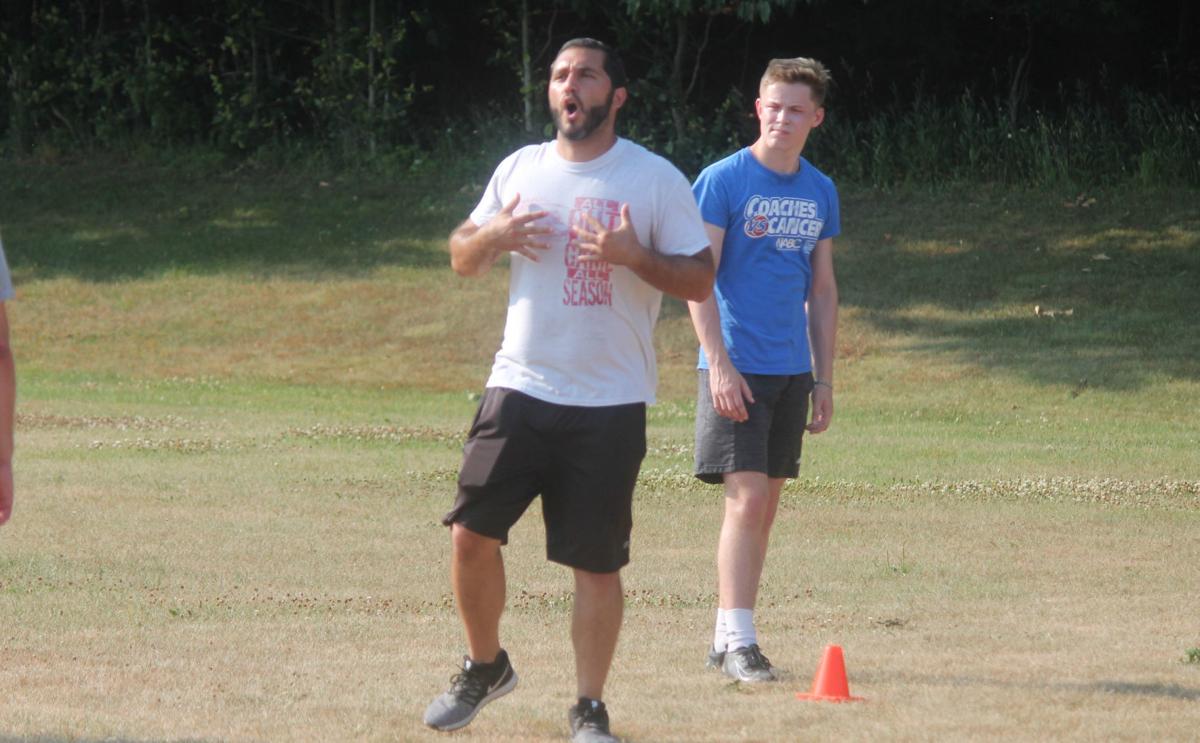 Coach Becchetti explains what he wants the linemen to do during a skillset breakdown at a recent practice. 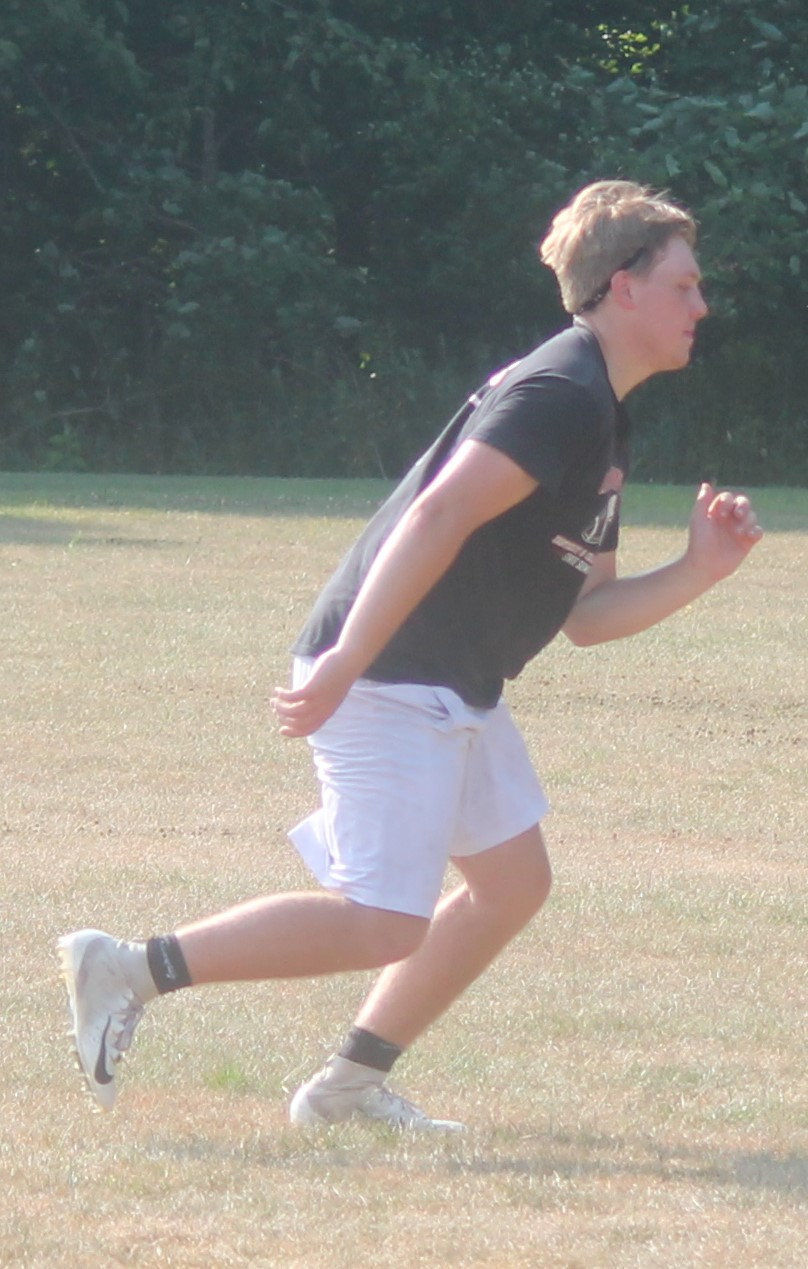 Johann Ella crouches during a lineman drill on Thursday.

Dalten Klinges runs through a blocking drill with Coach Kalinoski.

Coach Becchetti explains what he wants the linemen to do during a skillset breakdown at a recent practice.

The resumption of summer workouts is another step closer to normalcy for the Lackawanna Trail Lions football team.

The returning 2019 District I/II Football A Subregional Championship team hit the fields this week to begin its off-season, voluntary workouts. It was the first time the team had been together as a whole since the schools were shuttered with Gov. Tom Wolf’s directive at the start of the coronavirus pandemic in early March.

“In the summer we average about 24 guys a night,” explained Steve Jervis on Thursday before practice. “We had 29 on Monday, and a few guys are on vacation. We also had around 15 or 16 junior high kids. That shows a lot to the dedication these athletes have to our program.”

The team has been a championship caliber team, barreling into the state semifinals this past season, after a run at the title and securing the silver medal in 2018.

“This year we have six seniors, and a quality junior class of around 10 or 11 kids, there is a lot of talent on that field,” he explained. “Even though we don’t have a ton of seniors, we have a bunch of guys with that varsity experience. There is a good balance.”

Jervis is counting on the leadership of one of those experienced seniors, Ray Melnikoff.

The hard hitting 5-foot-11, 215-pounder, was a two time All-Region selection, and capped it with a repeat All-State nod this past season.

“Senior year is the most important year, and to think I might not get a chance to suit up just makes me work that much harder in practices,” explained Melnikoff. “We have to give 100 percent all the time. You never know when it could be your last time suiting up, so you have to push yourself every time you get out there.”

Melnikoff remains optimistic about the fall season, saying the Lions will be ready as they are preparing for the full season to proceed as scheduled.

Jervis echoed his player, saying, “We play Carbondale here on August 28. That is what we are working towards, we are in the mindset that on that Friday night, we will play. We can’t worry about things that aren’t in our control. We can only do what we do, prepare to play.”

As the group of players arrived at Lion’s Pride Stadium Thursday night, they followed guidelines established by the school board and enforced by the coaching staff. Masked, they lined up socially distant and waited for their name to be called for a digital temperature scan before heading to one of three pre-selected fields.

“We are only allowed to have 10 or less players in a group. We are fortunate to have enough coaches to allow us to have 10 athletes and two coaches at each field- the practice field, the game day field, and the band field. We currently are breaking the groups into linemen, wide receivers and QBs, and running backs,” reported Jervis.

Rules and regulations have been discussed by the staff, and reminders, both printed and electronic, have been released to the families of the players. A hand sanitizing station was set up, and disinfectant wipes were provided so equipment, when needed to, could be wiped down.

Jervis did point out, however, that the team has not been in the weight room.

“We are hoping to get in there next week,” he said. “I have been talking with (Trail high school principal) Dr. Murphy and currently, we are only allowed six guys in the weight room at a time.”

But just because the Lions aren’t pumping iron, doesn’t mean they aren’t getting ready.

“We are doing as much football as possible, and always improving on our activities. We are also focusing more on the defensive skills, and drills including tires, sleds, and hills. The players will be in shape, most of them worked hard in the shutdown, but, well, some didn’t,” he added with a smile.

“I’ve been doing some conditioning, lifting at home, and working outside a lot,” said Melnikoff. “I know that a lot of my teammates were working out during the quarantine. Our coaches were still reaching out to us, and a lot of us were staying active.”

Kody Cresswell, a junior running back, worked hard during the COVID-19 pandemic on his body weight work and running, as well as film study.

“I watched film of myself and the team,” said Cresswell, who only hit the gridiron for the first time as a freshman in 2018.

He said he didn’t know a lot about the game coming in, but after working with Coach Jervis and the players, he was a two-way starter by the end of last season.

“Coach Jervis is the best football coach out there,” proclaimed Cresswell. “He has a lot of patience and helped me tremendously, he taught me everything I know. On the team level, Ray stepped up and helped me learn the game.”

“It was great to be able to progress and be a part of that team,” added Cresswell.

Cresswell is no stranger to success as he was also part of the 2020 District II 2A wrestling individual championship team. But once the wrestling season ended, and his track season was cancelled in the spring, he began focusing on football.

“I am looking forward to getting back out there, and being a bigger part of the team,” he said.

Melnikoff takes his role as a leader seriously, adding, “(I just make) sure they don’t get discouraged. Especially in the summer, when it’s hot outside, they might start to get down on themselves, but they have to keep their head up and just have some fun.”

Jonah Houser, another new face, is an upcoming sophomore and according to Jervis, a player who he thinks will make an impact.

As a wrestler for the past 11 years, Houser played one year of junior Lions football but didn’t stick with it.

“Coach Jervis talked to me and asked if I was interested,” recalled Houser, “and I was all in. I enjoy the action- running the ball, the hard hits, and especially being under the lights in front of the crowd.”

With the coronavirus, however, Jervis and Melnikoff discussed the very real possibility that the stands might be empty this fall.

“In our area, high school football is so important for so many reasons,” stated Jervis. “In a smaller school like ours, the community support is everything. It is surreal to think we would play a game in front of empty bleachers. Just bizarre.”

Melnikoff added, “Personally, when I am on the field, I don’t really hear the crowd, but I feel them. The energy at our home games is something I can’t explain. I don’t know how I would feel if I couldn’t have that behind us.”

“I am going to let it out there though this season, and have fun. Who knows when I will be able to suit up again, so I need to leave it all on the field, and enjoy every minute of it,” said Melnikoff.

Jervis said, “We are trying to keep an open mind, and make this as normal as possible for the players and team as a whole, while also keeping everyone’s health and safety in mind.”