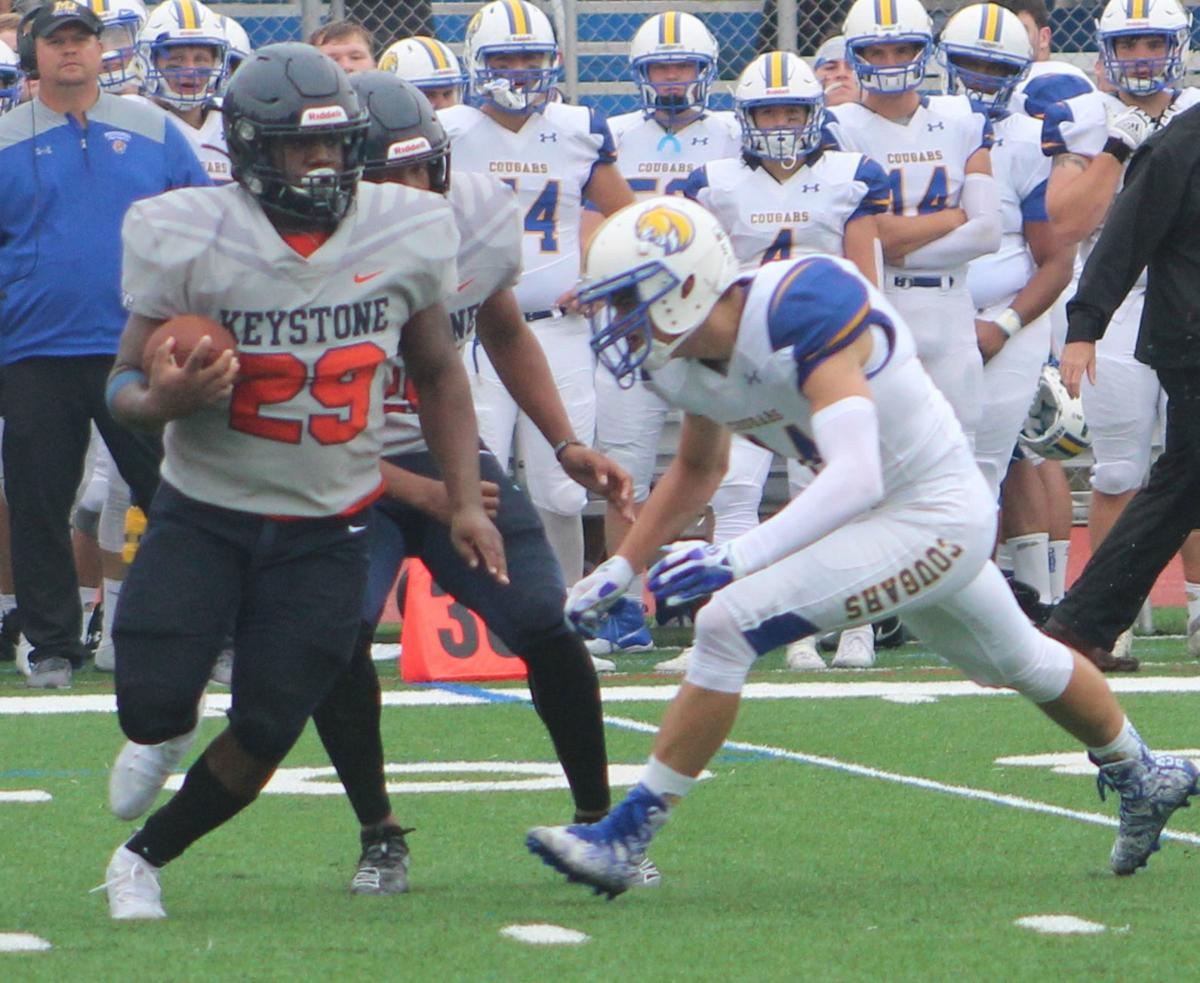 In its first football season in 70 years, Keystone churns up some yardage against Misericordia last fall. 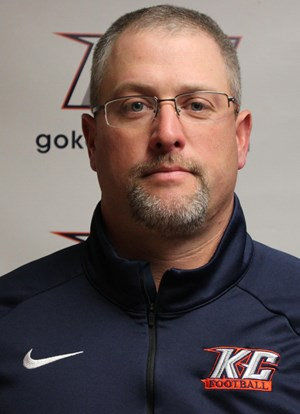 The Giants have been waiting to begin a competitive varsity season on the football field for more than 70 years.

They will have to wait a little longer this spring and summer due to the COVID-19 pandemic.

The Keystone College football team, coached by Justin Higgins, was reinstated in 2018 with a schedule that included varsity and junior varsity contests in an independent season.

Set to join the NCAA’s Division III in the Colonial States Athletic Conference this fall, the coronavirus halted the spring and summer workouts, and bonding, needed to propel the team into its inaugural season.

“For any kind of a young program, missing spring obviously hurts,” Higgins told Forbes magazine earlier this month. “For a new program, and especially with how we designed to build it in 2018, everything led to fall 2020 with each semester having steps built in. This past spring was going to be another block of development, teaching and working on strength and conditioning as the players prepared for their first varsity season. All of sudden, you remove that piece, a piece you planned the whole way, and now you have to learn to adapt and find a way around it.”

Ideally, Higgins will have his players report to the campus in La Plume around Aug. 12 or 13 to check in and have freshman orientation.

The Giants were banking on a general summer time frame of completion of a few construction projects surrounding the turf field on campus.

“We built in some wiggle room in the initial projections to allow for an Aug. 1 target,” said Higgins. “But when everything shut down, the field house, multiteam locker rooms, pressboxes, bleachers- everything- was stopped. But in May, it all picked up again, and though it is still too early to predict an exact date, we have had a good opportunity to play catch up.”

Starting the program from the ground up, or “brick-by brick” as the team’s social media platforms proclaim, Higgins has made recruiting a priority.

“As a newly established program, we didn’t have a base, or target area and weren’t known,” he explained. “We relied on Eastern Pa. and New Jersey for our initial recruits, and had a great percentage. We also sprinkled some New York kids in there, but didn’t have a huge push on Long Island.”

He continued, “For the current 2020 cycle, we realized it wasn’t that far for the Island players. They all have to get to the bridges anyway, and it is basically a straight shot to us from there. We had two coaches out there, and we are still growing the relationship, but we have good numbers. We are also looking at lower New York as well as the capital region.”

Since the recruiting for 2020 has mostly been completed, the pandemic created nationwide problems pertaining to the 2021 class. Higgins said the rising seniors were going to be the most impacted.

According to a letter sent to the Keystone College community from school president Tracey Brundage in early June, the student body can expect on campus instruction to begin Monday, Aug. 24, pending no further federal, state, or local restrictions from the government.

Brundage also indicated there will be changes at the end of the semester, with residence halls closed after Thanksgiving break and conclusion of classes and finals to be virtual.

Higgins said in theory he would have liked to release the team’s schedule in late spring, but the coaches decided not to publish because of the uncertainty.

“We didn’t want to put out a schedule, and then put changes out, and then who knows what could happen from there,” explained Higgins. “We didn’t want to get ahead of ourselves, and be locked into a schedule. A lot of decisions still need to be made. All teams are in the same place, we are just waiting to see what our guidelines will be.”

Higgins did say that on the original schedule, the Giants were slated to host six of their 10 games on their home field.

“Our team played every game on the road last season, and our fan base traveled extremely well,” he said. “We were excited to play on our home field, in front of our friends, families, and fans, but now with the government restrictions, it is unclear how full our stands will be.”

“There are a lot of moving parts,” he continued, “and nothing has been released yet. It is out of our control, we can only focus on the players.”

Whatever happens though, Higgins stressed, he will have the players ready to perform.

Last season, with the majority of the team underclassmen, Keystone did have the leadership benefit of upperclassmen that participated on the college’s track and field team.

“Eddie (Sichilongo) and Yaw (Acheampong) were great young men who stepped up to help lead our freshmen. Having them there helped provide a campus, and locker room, presence to direct the new student athletes. We also had other non-traditional, non-freshman players, Shane McGrath and Carter Morse who were on board at Keystone, knowing we didn’t exactly have a ‘team’ in place. Also, William Crawford and Zechariah Wassell transferred in, just to be a part of our program,” said Higgins.

An area Higgins is concerned about being affected by the delay is the team bonding.

He said, “With any team, but especially a team as young as ours, is the time together building bonds. Obviously, the weight room and drills are important, but having the opportunity for coaches and players to be around each other is huge. It was to be our first true off season together, building relationships from a personal aspect.”

“The spring is a huge time for us to be a part of our local communities,” said the coach. “I believe in the physical ability to be visible in our community. That was a lost opportunity for us, but we look forward to continuing next spring, hopefully, if things return to normal.”

When the Giants return to the gridiron, Higgins is confident that the team’s strength will be the quality of guys under his tutelage.

“What people need to realize is that most of my players were freshmen, in only their second semester of college,” he said. “They were just adjusting to college, and each other, and then like every other college in the country, were told to do remote learning. They adapted and stayed focused through it all.”

“I am very proud of all of them, and what they were able to accomplish through remote learning,” he boasted.

He summarized, “With all the challenges a startup program has, then adding in the COVID-19, we are confident that we will build on whatever comes our way. And then go through it.”