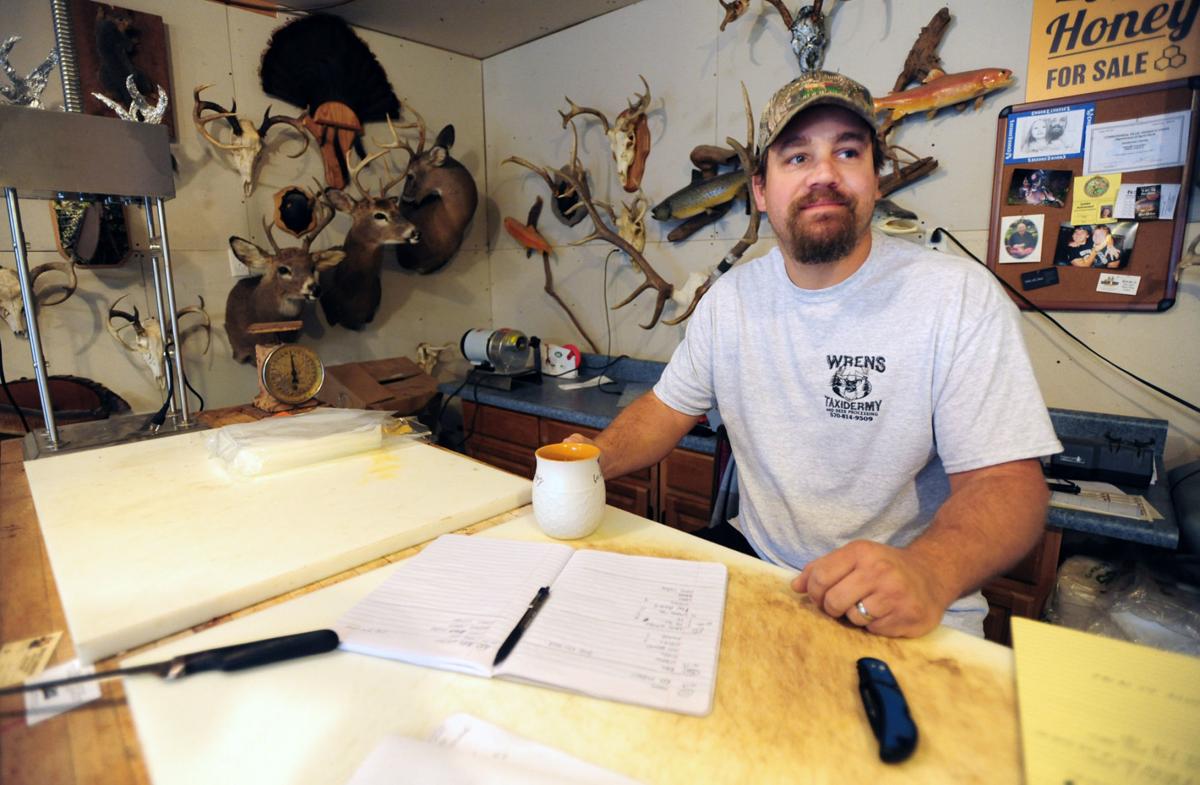 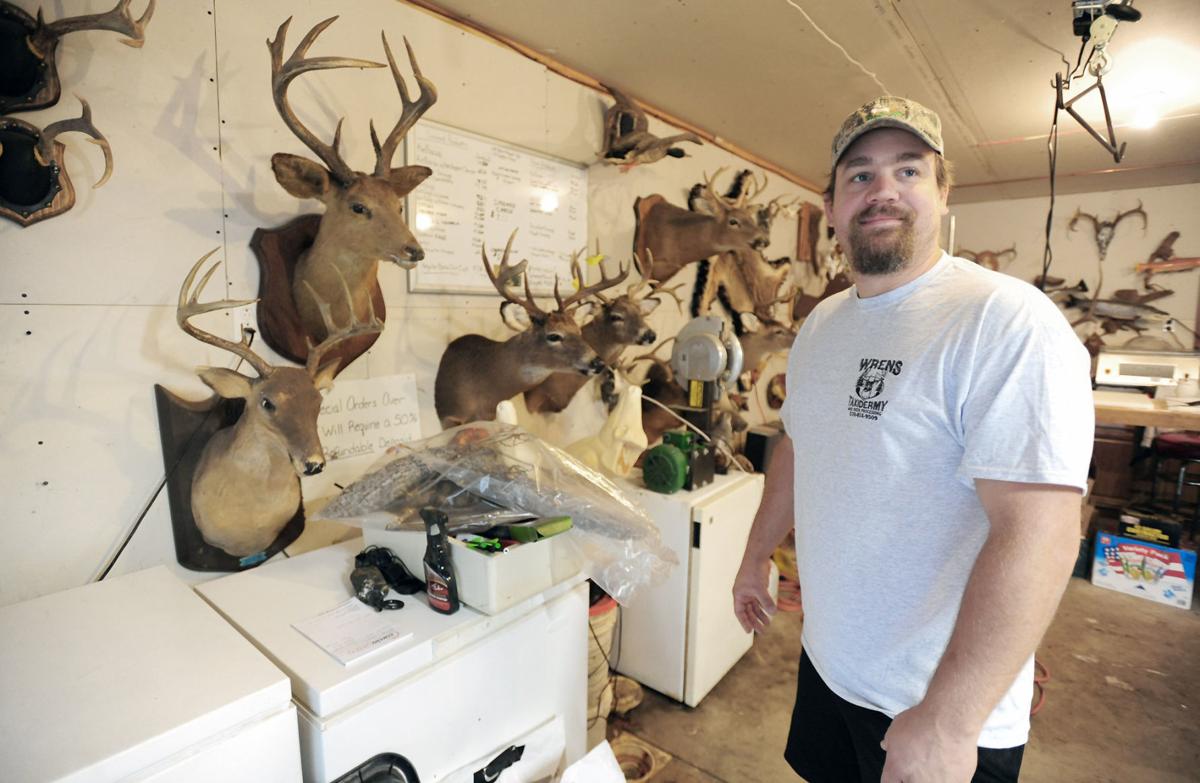 Lance Wren, of Wrens Taxidermy and Deer Processing, Dallas, Pa. For Sunday, Hunters Sharing the Harvest. The head of HSH said requests from food banks for venison have jumped by 50percent since Covid-19, and he is encouraging hunters to donate the first deer they shoot to HSH.

Lance Wren, of Wrens Taxidermy and Deer Processing, Dallas, Pa. For Sunday, Hunters Sharing the Harvest. The head of HSH said requests from food banks for venison have jumped by 50percent since Covid-19, and he is encouraging hunters to donate the first deer they shoot to HSH.

The demand for donations of venison from food banks has skyrocketed since COVID-19 arrived in March, but John Plowman, executive director of Hunters Sharing the Harvest, believes hunters can fulfill the need.

Since March, Plowman said, the requests his organization has received from food banks for venison has increased by 50%. Hunters Sharing the Harvest allows hunters to donate their deer at participating processors for free. The venison is ground and packaged before it’s distributed to area food banks, including the a food pantry in Wilkes-Barre operated by the Commission on Economic Opportunity.

Plowman anticipates the demand for venison donations will continue to grow through the fall, and hunters have already started donating deer during the early weeks of archery season.

“Because of the pandemic, people have lost jobs, businesses have closed and many have fallen on hard times,” Plowman said. “There’s a real need for this.”

In fact, Plowman is counting on donations from archery hunters to account for a greater percentage of the venison that reaches food banks. During the 2019-2020 hunting season, the Harrisburg-based organization (www.sharedeer.org) donated a record 160,445 pounds of venison.

“We usually get 5,000 deer total into the food bank system,” Plowman said. “Archery season comprises 1,000 to 1,500 of the deer donations, and I think it’s going to eventually cover half of all the deer donated because so many people are bowhunting and the season isn’t compressed.”

Bill Williams, information and education supervisor with the Pennsylvania Game Commission’s Northeast Region, said the agency is going to promote HSH even more this year due to the rising need from food banks. The Game Commission donates $55,000 to HSH, and Williams said it makes sense to get the word out on the importance of donating deer.

Williams hopes he can practice what he preaches if he’s fortunate to harvest a deer this season.

“If I shoot a deer this year, the first one is going to the food bank. Most of us have more than one antlerless tag, and I think it’s a good time for hunters to consider donating the first deer they harvest,” Williams said.

“People are having a harder time this year, and putting meat into the hands of those that need it is a noble cause.”

Plowman said HSH fills a void witnessed at many food banks as protein from meat, such as beef and pork, are usually in short supply at the facilities. Venison is high in protein, he said, and all of the deer donated to the program are processed into ground meat, which makes it versatile for food banks to utilize.

The ground meat from one deer, Plowman said, can provide 200 meals.

“You can do a lot with ground venison,” he said. “Our deer meat is all derived during a three-month period, and the food banks know the time to get it is as the hunting season is progressing.”

The northeast is one of the strongest areas in the state when it comes to venison donations, Plowman added. The majority of donated deer in the area is distributed to the Weinberg Northeast Regional Food Bank, which serves Lackawanna, Luzerne, Susquehanna and Wyoming counties.

Plowman said the donation program is popular in the northeast because there are a lot of hunters, plenty of deer and participating processors in every county.

“No hunter will have to drive more than 50 miles to donate a deer in the northeast,” he said.

Still, HSH is facing a challenge in other counties when it comes to finding butchers to participate in the program. Even though processors are reimbursed by the organization for their costs to process donated deer, there are several counties without any participating butchers.

“No one wants to get into butchering, and there aren’t a lot of deer processors out there to begin with,” he said. “I always work hard to replace the butchers I lose.”

One processor who recently joined the HSH program is Lantz Wren of Dallas, Luzerne County. He has operated Wren’s Taxidermy and Deer Processing since 2002, but joined HSH last year.

Wren admitted his shop gets busy during hunting season, but the involvement with HSH doesn’t require any extra work.

“It helps that all the donated deer are ground meat and you can load it in 5-pound tubes,” Wren said. “It’s real easy to grind and package the meat, and I’m hoping to do as many donated deer as hunters will bring in.”

Wren believes the partial donation option will be popular as many hunters like to keep the backstraps or have some of their venison made into specialty products.

He also agrees with Plowman that archery season could be the biggest contributor to the program.

“I think the harvest numbers are going to go down in rifle season because so many people are hunting archery,” Wren said. “Last year we did more archery deer than rifle. And even though many archery hunters wait for a big buck, they can still harvest a doe in the meantime and donate it to the program.”

Deer processors in Wyoming, Lackawanna and Susquehanna counties participating in the Hunters Sharing the Harvest Program:

Visit sharedeer.org for the full listing of processors.