You have permission to edit this article.
Edit
Home
Customer Service
News
Sports
Obituaries
e-Edition
Calendar
Classifieds
Share This
1 of 6 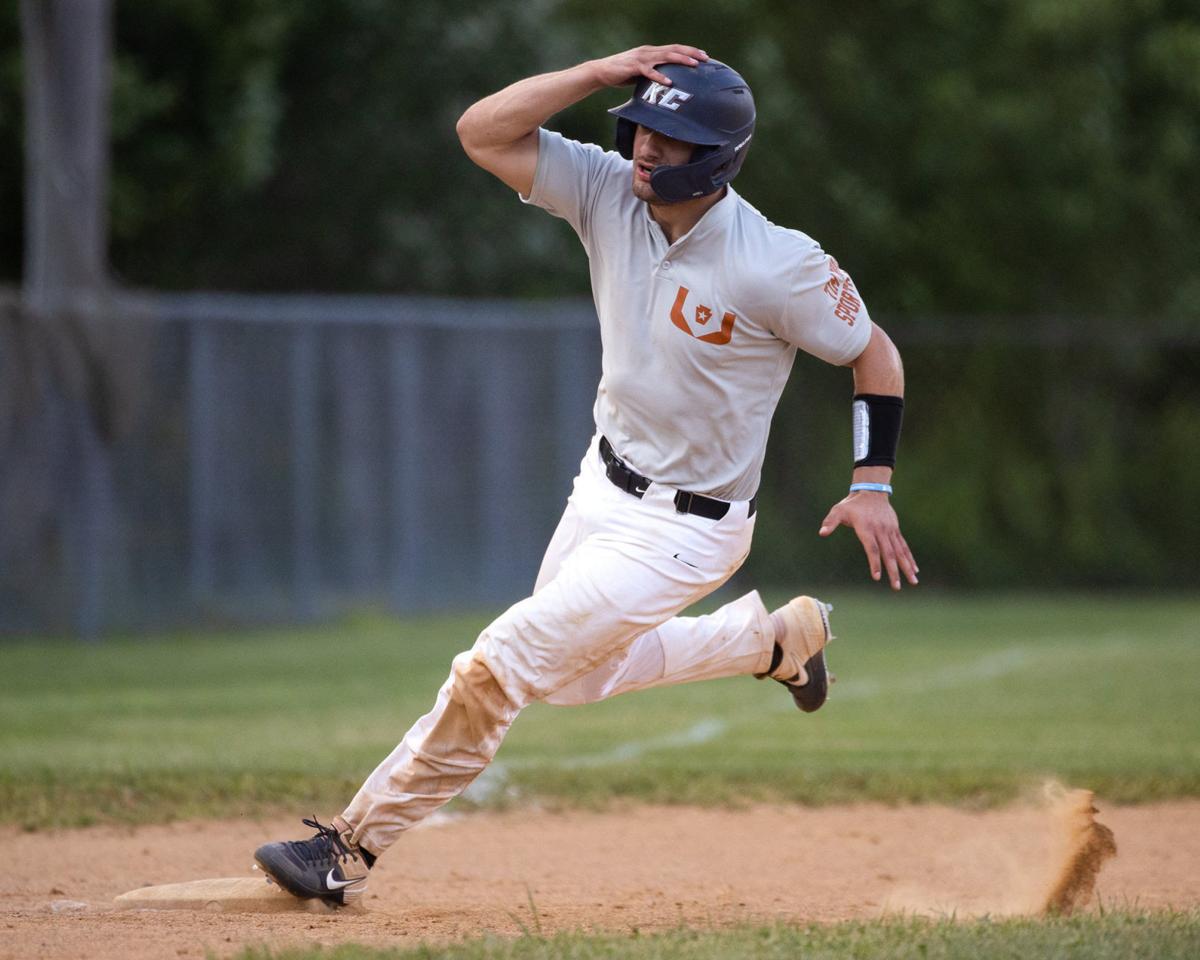 The Baseball U PA Gray Team’s Nick Carlini holds onto his helmet as he rounds third during a game against the Vegas Team at Covington Park on Tuesday. 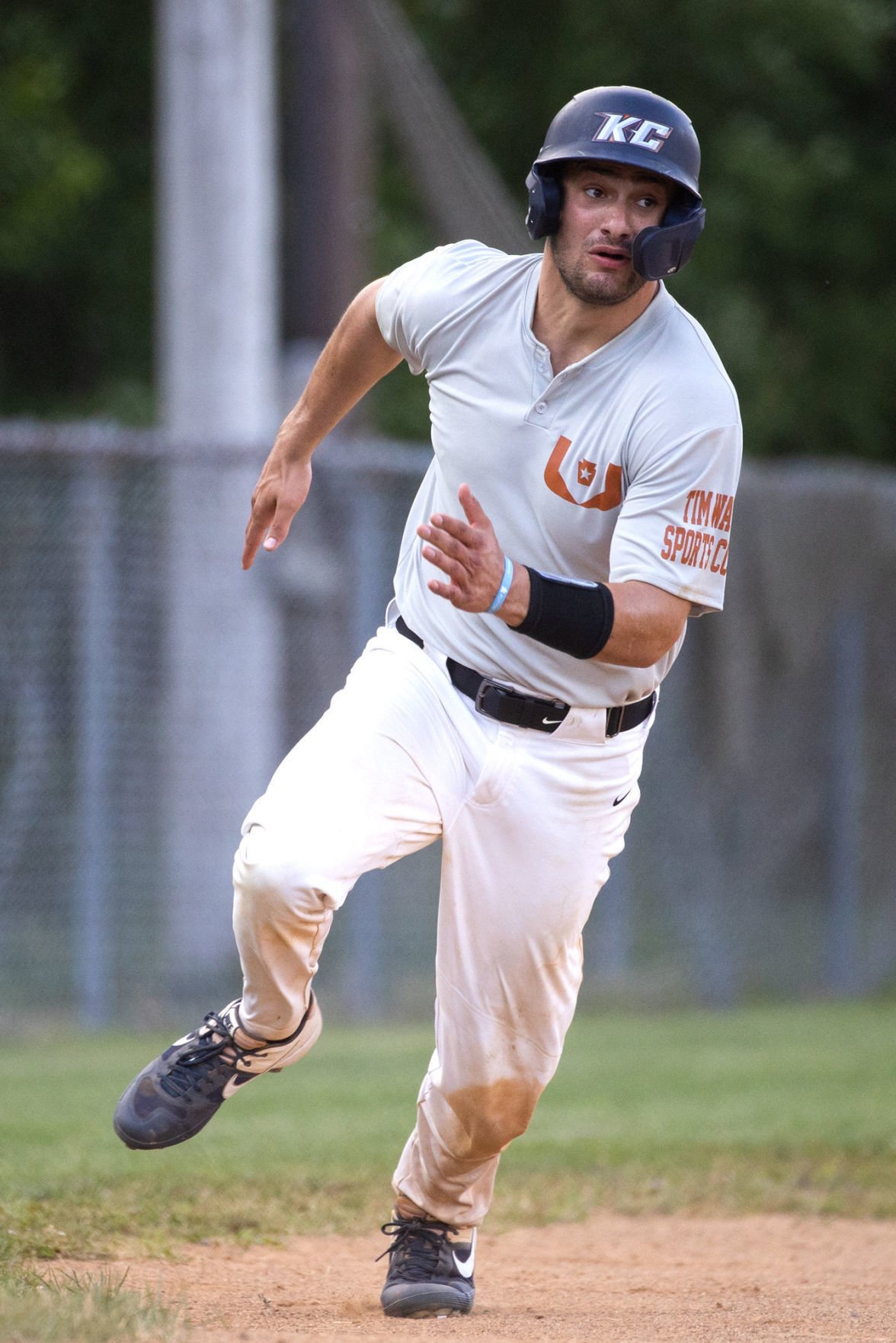 The Baseball U PA Gray Team’s Nick Carlini rounds third during a game against the Vegas Team at Covington Park in Covington Twp. on Tuesday, July 7. 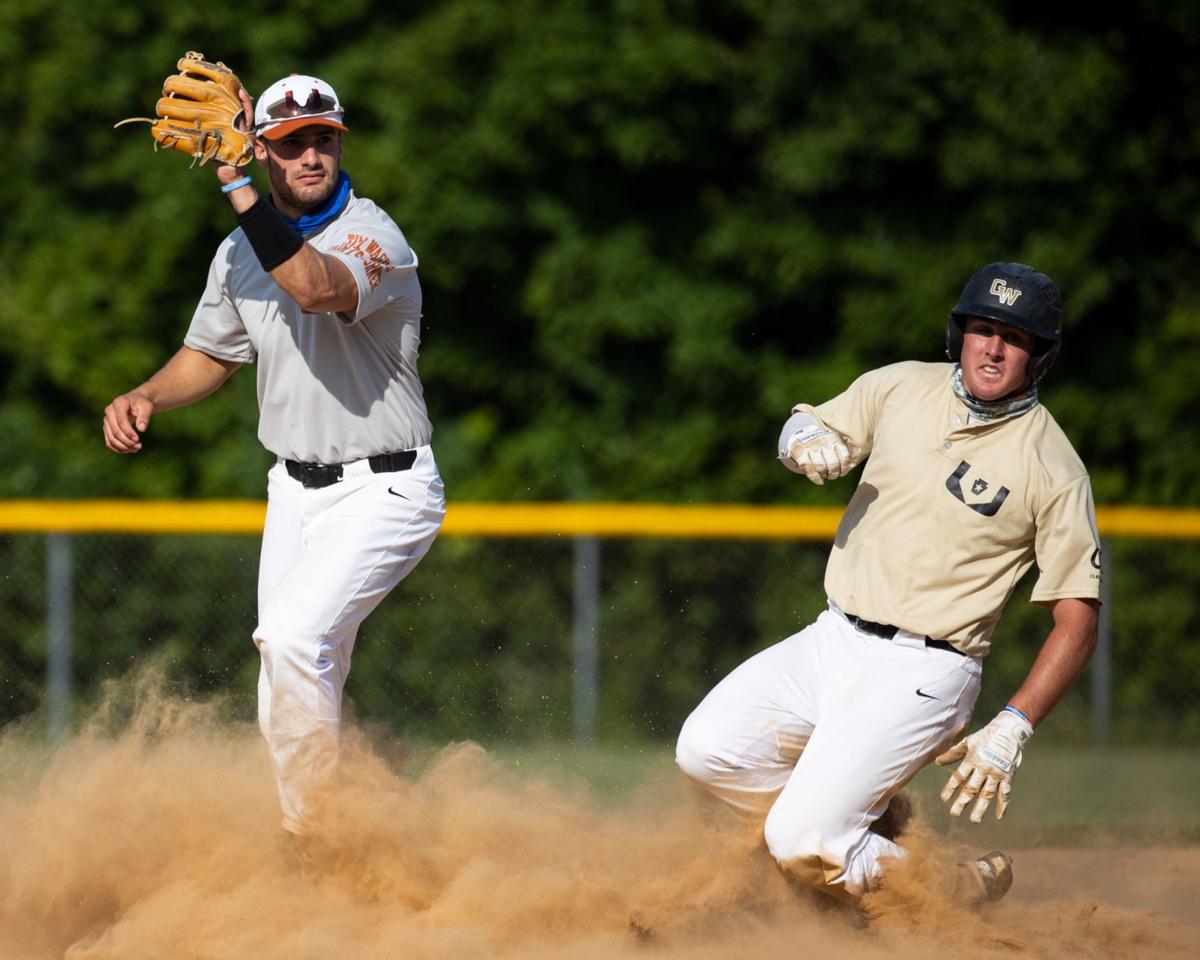 Vegas Team’s Wyatt Metzger, right, is out at second as the Gray Team’s Nick Carlini makes the catch for the force out. 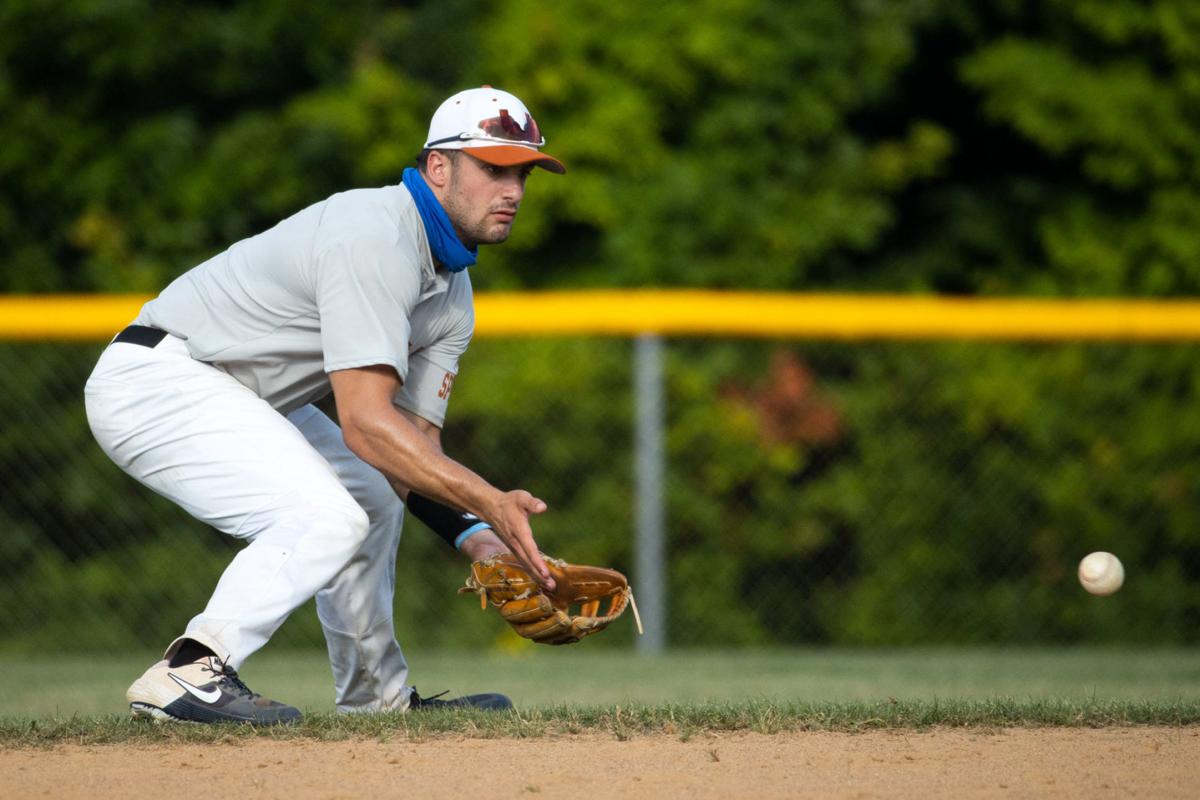 Gray Team’s Nick Carlini eyes a catch during a game against the Vegas Team on July 7. 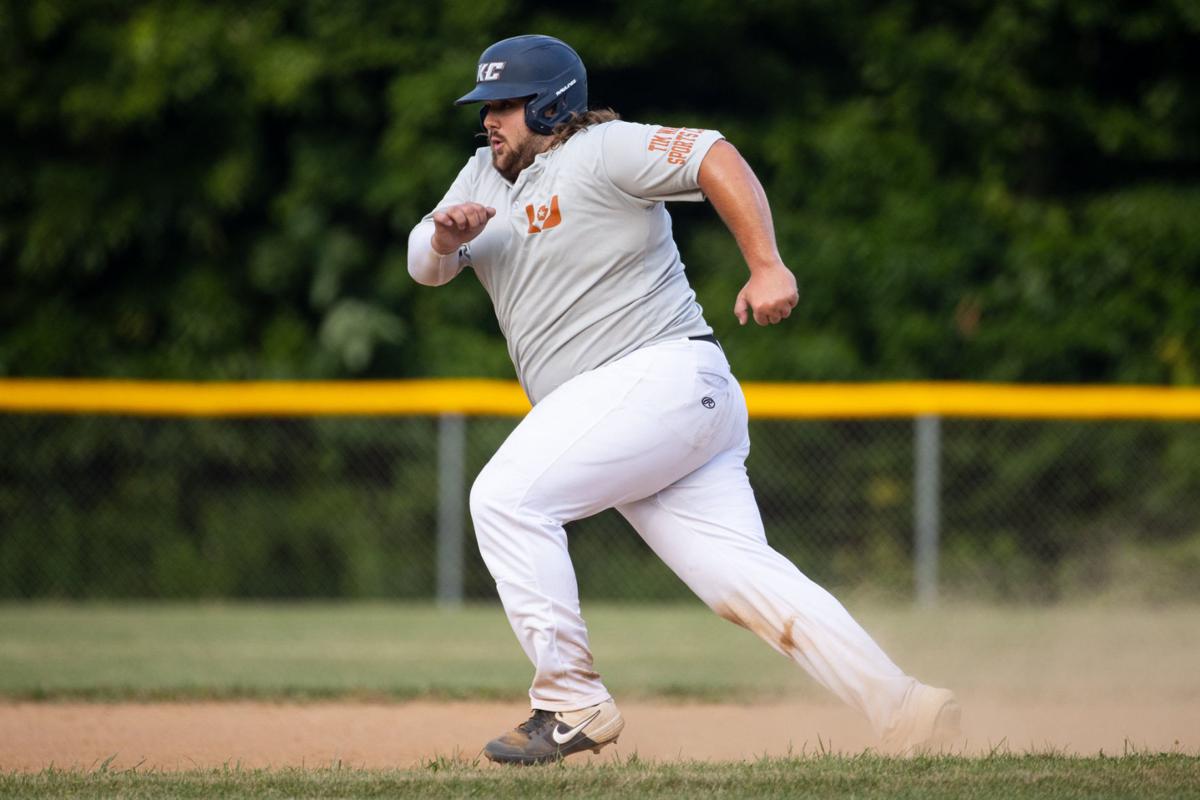 Gray Team’s Brendan Kucharski runs to second during a game Tuesday against the Vegas Team at Covington Park in Covington Twp. 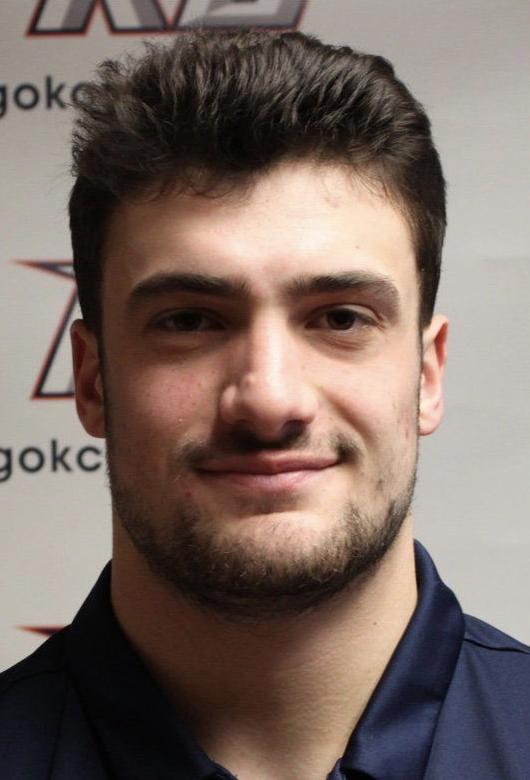 The Baseball U PA Gray Team’s Nick Carlini holds onto his helmet as he rounds third during a game against the Vegas Team at Covington Park on Tuesday.

The Baseball U PA Gray Team’s Nick Carlini rounds third during a game against the Vegas Team at Covington Park in Covington Twp. on Tuesday, July 7.

Vegas Team’s Wyatt Metzger, right, is out at second as the Gray Team’s Nick Carlini makes the catch for the force out.

Gray Team’s Nick Carlini eyes a catch during a game against the Vegas Team on July 7.

Gray Team’s Brendan Kucharski runs to second during a game Tuesday against the Vegas Team at Covington Park in Covington Twp.

When Saint Joseph’s pitcher Peter Gallo came out of the Vegas Team’s bullpen in the sixth inning, members of Gray Team started to pay closer attention to their teammates working the radar gun behind home plate.

Ninety one. Ninety two. The 6-foot-4 righty from Immaculata even touched 94 mph on a pitch that sailed to the backstop at Covington Park.

Gallo dominated the all-NCAA-Division-III lineup at first, striking out five of the first seven batters he faced, with one reaching on a walk and another on an error.

Eventually, however, they got to Gallo, too.

University of Scranton outfielder Connor Harding jumped a Gallo fastball and shot it to left field for a double, capping the scoring in the Gray’s 11-7 win over Vegas in a Baseball U PA Collegiate Summer League game Tuesday.

Harding went 2 for 4 with a double, a triple and three RBIs. Keystone’s Nick Carlini, an Abington Heights grad, smashed a double off the wall, ripped a single and drove in two runs. Giants teammate Brendan Kucharski, a Mid Valley alum, drove in two runs as the Gray offense scored three runs in the fourth and fifth innings, then tacked on four in the sixth.

“My approach is that I want that,” Carlini said of the chance to face a Division-I pitcher who throws that hard. He didn’t quite get that chance Tuesday, left waiting in the on-deck circle when Gallo got the last out of the eighth.

“I want that challenge. Because if you succeed, then it’s so rewarding, but even if you fail, then you learn something. You take that to the next at-bat or even pass it on to someone else in the dugout. I try not to back down. I love it. I love the challenge of it.”

Organizers of the league thought they had enough Division III players sign up who felt that way, so they decided to make one of the six teams a roster of the best D-III players, who can have a harder time earning spots in premier summer leagues. Harding was named the Landmark Conference Player of the Year as a sophomore in 2019. Carlini is a career .292 hitter at Keystone who slugged .582 in his breakout junior 2019 season. Wilkes’ Brandon Reno, a Northwest grad, hit .412 with a .681 slugging percentage over 35 games in his college debut in 2019. Tuesday’s starting pitcher, RJ Kuruts, a former Forest City standout, was off to a dazzling start to his junior season at St. John Fisher, striking out 24 in 18 innings with a 1.00 ERA before the coronavirus pandemic shut it down.

“‘It doesn’t matter who you are. It doesn’t matter where you come from. If you’re good, people are going to notice you, teams are going to notice you, whatever the case may be,’” Carlini said, quoting his Keystone coach Jamie Shevchik. “Just instilling that kind of culture into this team and let them know that we can compete with anyone is something that I try to do for us.”

Kuruts allowed just one run over four innings on a double by JD Barrett (Cabrini/Dallas), the second-to-last hitter he faced, that gave Vegas a 1-0 lead. Kuruts struck out three, walked one and rolled six groundouts.

Gray responded quickly, with Carlini turning on a pitch from starter Drew Patton (Niagara/Dallas) a lining it off the fence in left field. Kucharski then smacked a single to right that radar guns picked up at 98 mph off his bat, which might have some extra pop to it.

“That is a Mike Ford bat,” Kucharski said.

He won the New York Yankees and former Scranton/Wilkes-Barre RailRiders first baseman’s bat in a basket raffle. Kucharski said it felt right when he swung it, so he started to use it in summer ball and hits started coming.

“I’ve come alive hitting the ball, just to get more barrels on stuff,” Kucharski said. “But I feel like if it breaks, I can hang it up anyway. So, it’s a win-win situation.”

He’s 4 for 13 so far, with a mammoth home run Sunday that Gray Team coach Matt Fidati is still wowed by.

“People think we’re D-III, like we weren’t good enough to go D-I, D-II,” said Kucharski, who got into four games before his freshman season at Keystone was canceled. “But that’s not the case. We’re just trying to come out and prove that we could compete with all these D-I, D-II kids. Which, I would say we’re doing right now.”

Vegas (1-6) tied it in the top of fifth, Gray went back in front, 6-3, in the bottom of the inning, then Vegas grabbed the lead again in the sixth. Barrett’s towering fly ball carried just enough to clear the right-field fence for a two-run homer, Brandon Lohner (Cabrini/St. John Neumann) brought in the tying run with a single, then Jaxon Dalena raced home on a double steal for a 7-6 lead.

Gray stormed right back, with Harding tripling in two runs and Tyler Kirsten (Scranton/Wallenpaupack) and Carlini tacking on RBI singles.

“I think when we’re on, we can do some damage,” Carlini said. “It’s huge to see when we string together a good inning because the energy’s high and it really seems like we can do a lot of great things and I just love being a part of that.”

The Black Team swept the White Team, 4-1 and 6-2, in a Baseball U PA Collegiate Summer League doubleheader on July 11 at Keystone College’s Christy Mathewson Field.

In the second game, David Baltrusaitis (East Stroudsburg/Tunkahnnock) lined a two-run single to break a 2-2 tie in the fifth inning that put Black (5-4) ahead for good and on its way to a five-game winning streak.

JP Walsh (Monmouth/North Pocono) went 3 for 3 with a double, a walk and two runs out of the leadoff spot — he reached base safely in six of his eight appearances over the doubleheader — and Joseph Rossi (Delaware Valley/Holy Cross) doubled.

Nate McLain started and struck out three over 3⅓ innings of scoreless ball.