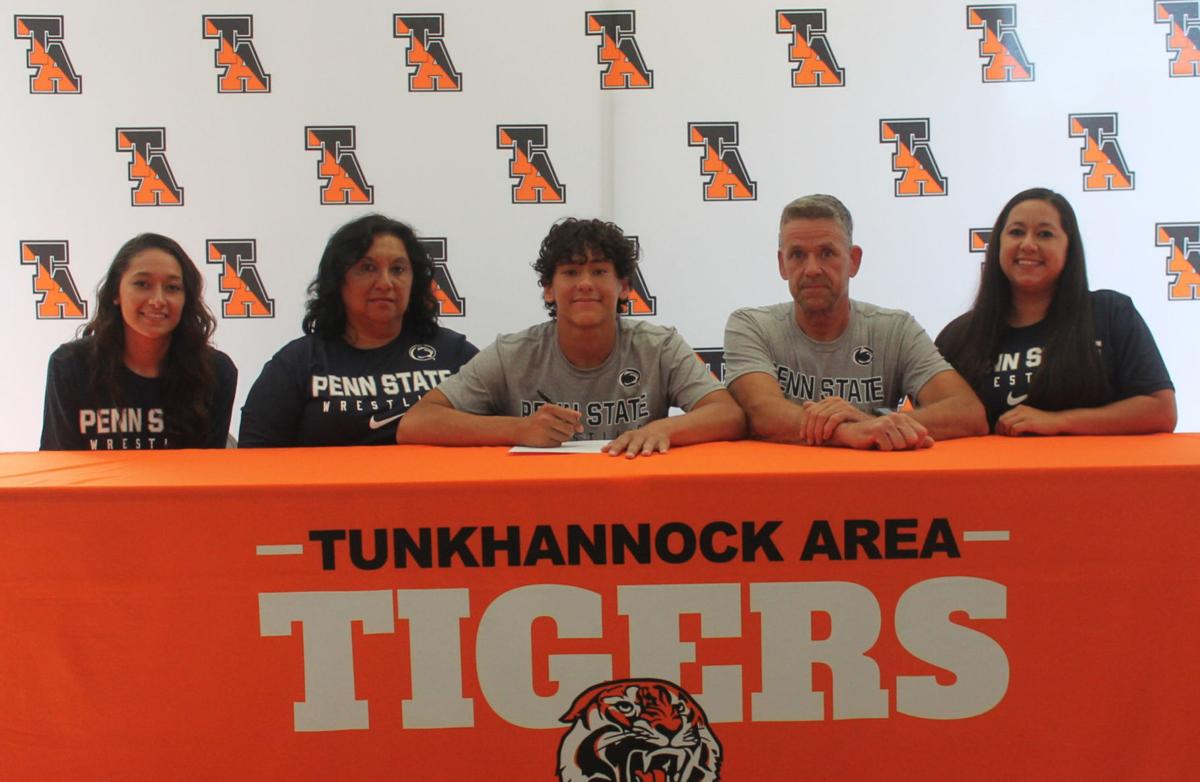 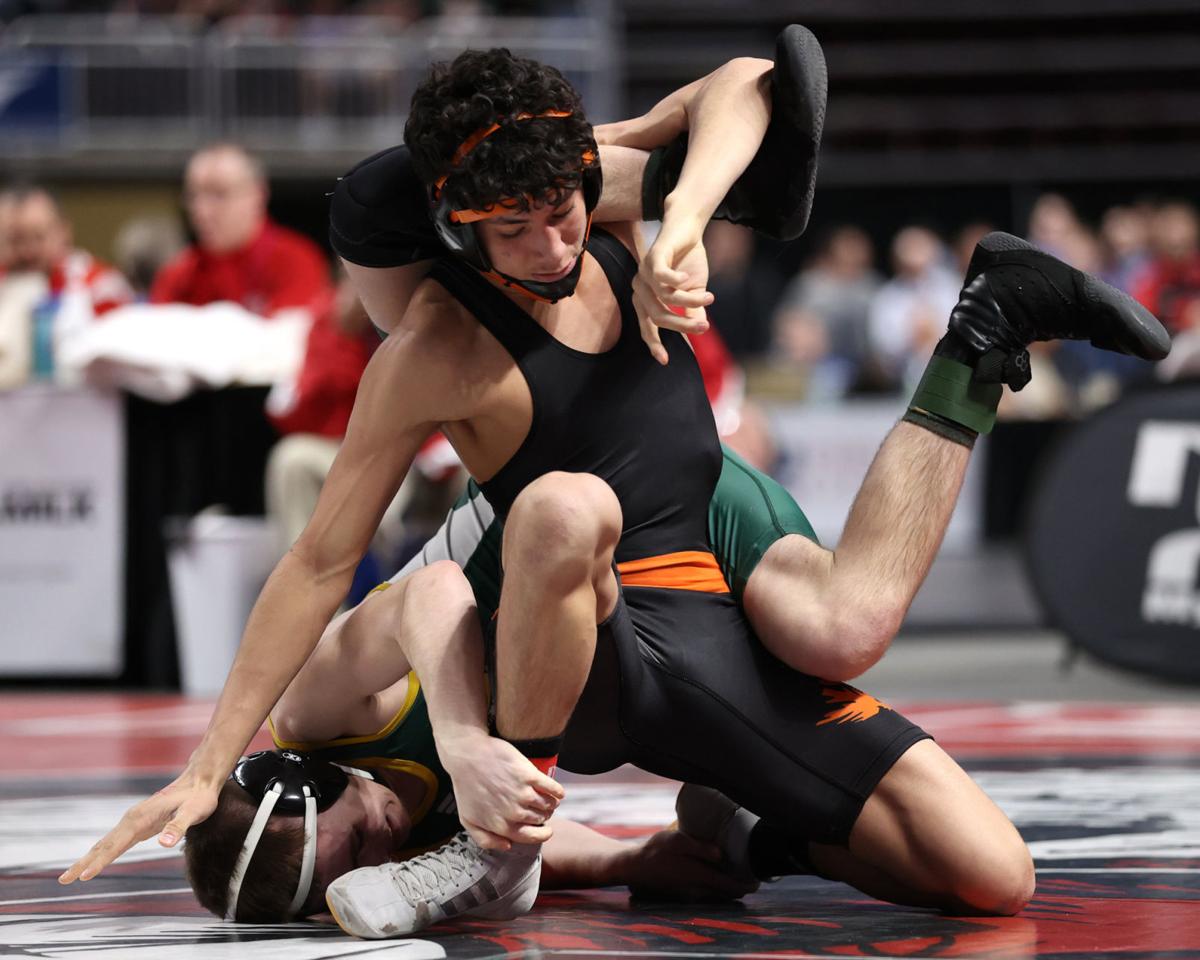 David Evans wrestles Allentown Central Catholic’s David Kreidler in a Class 2A 126-pound match on the first day of the PIAA Wrestling State Championships at the Giant Center in Hershey this past March. 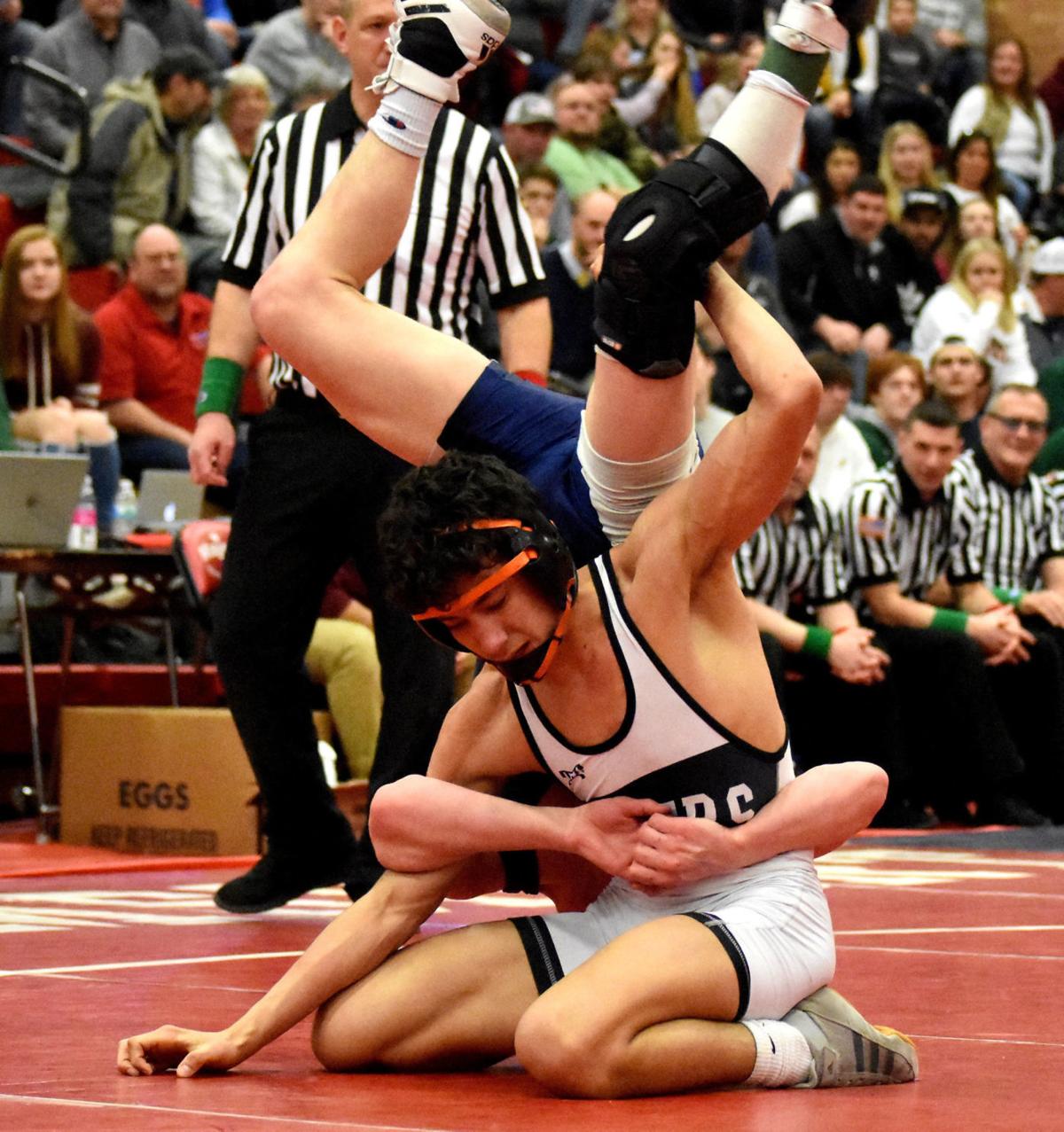 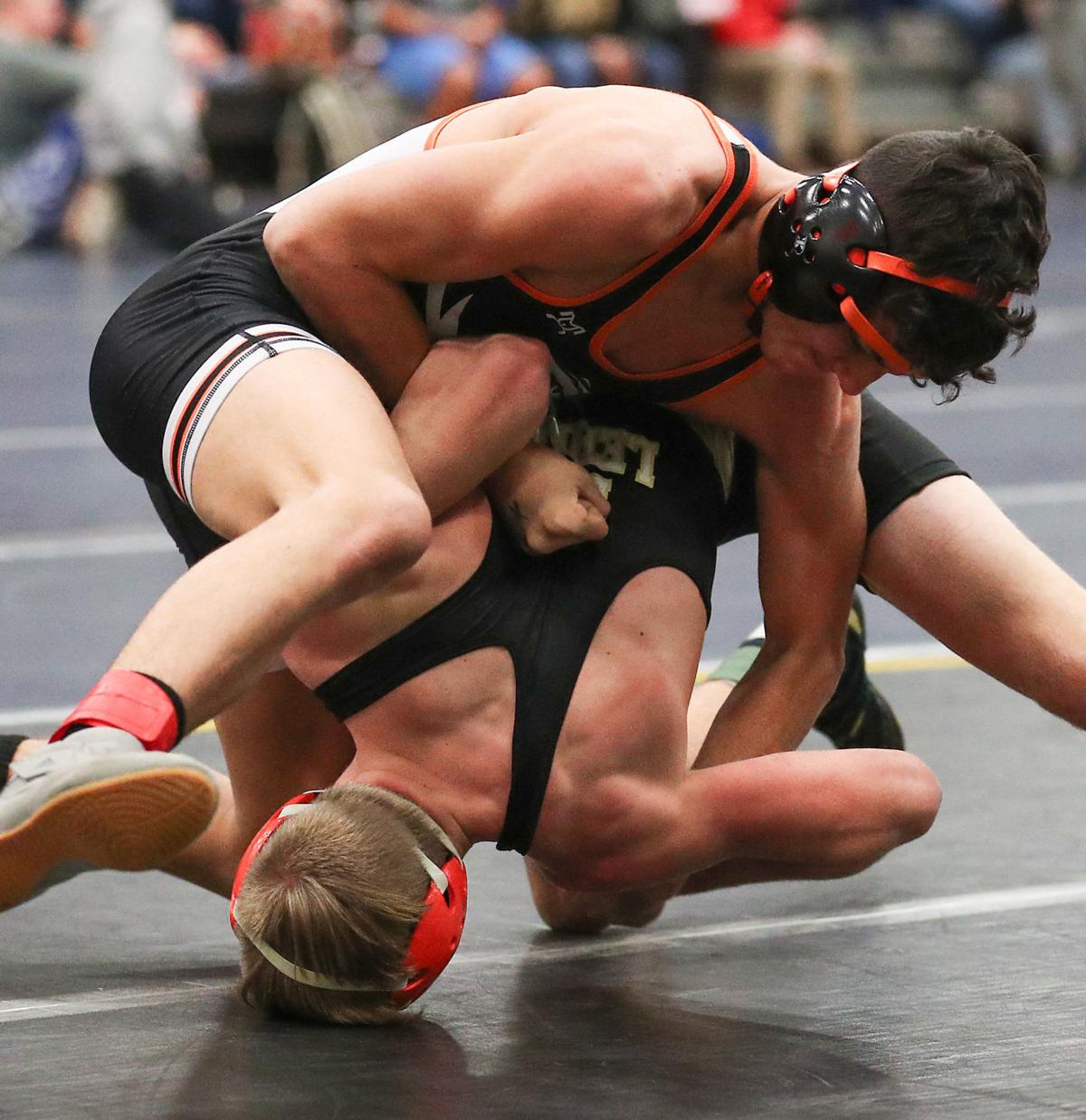 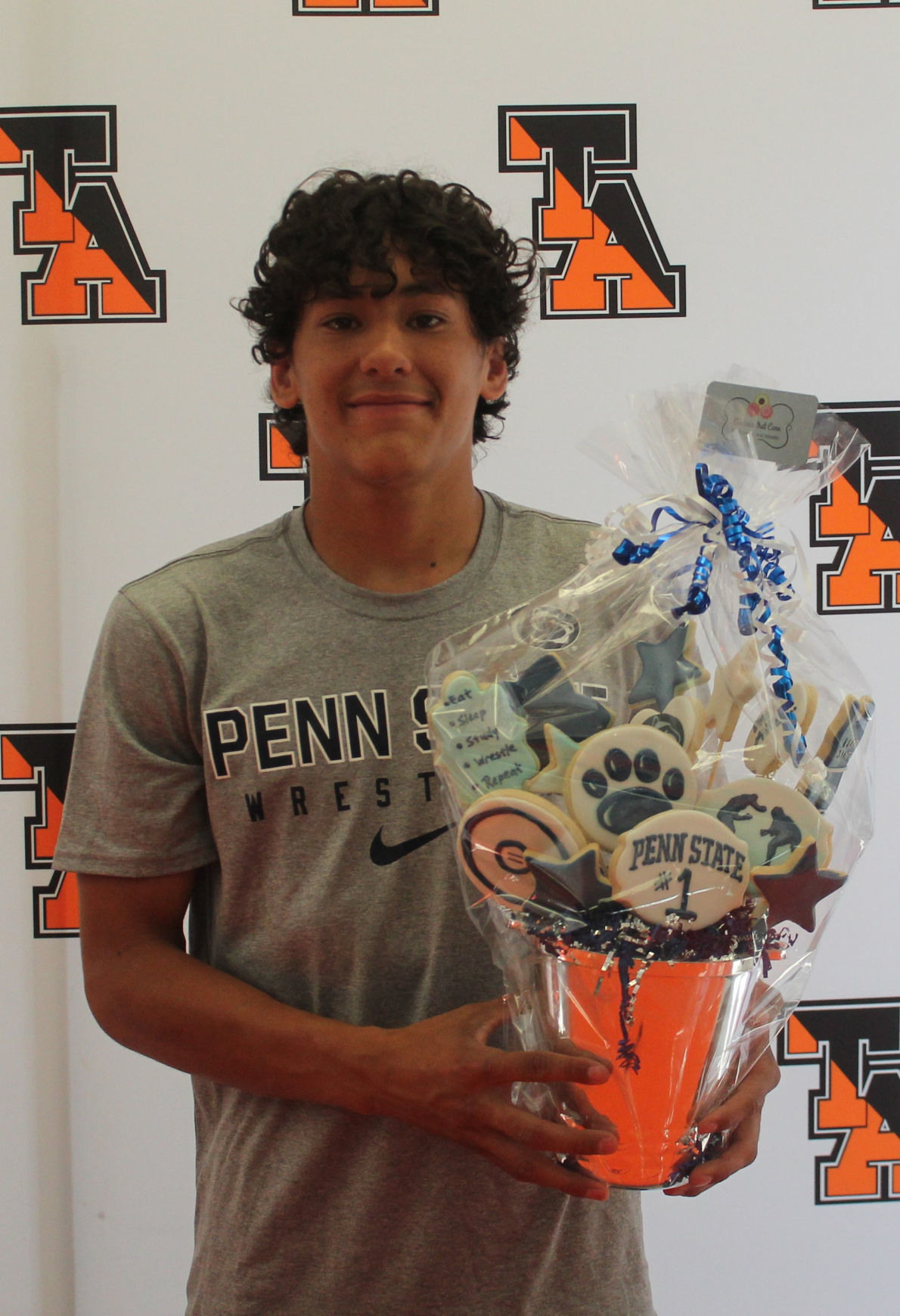 Dave Evans shows off a bouquet of Penn State Proud cookies prepared for him on his signing day. The senior will attend the Division I school this fall to wrestle and study orthopedic medicine. 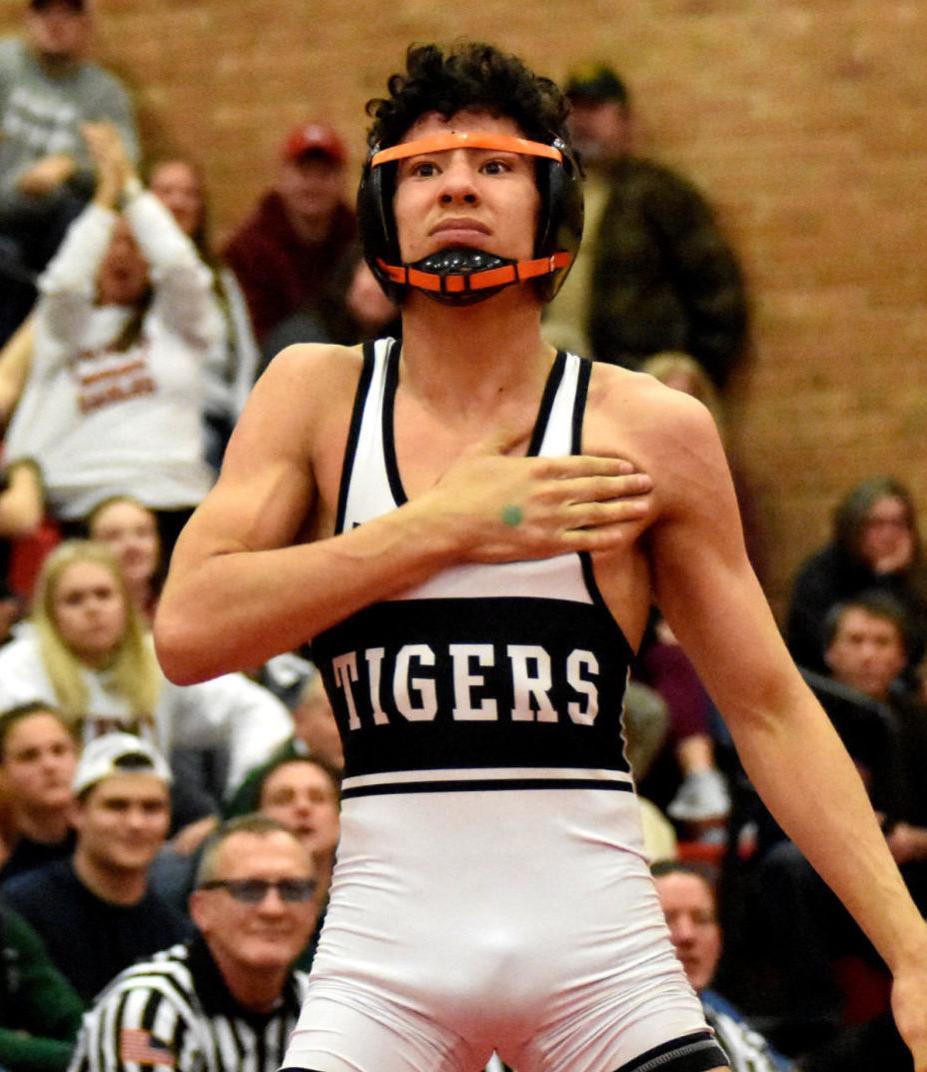 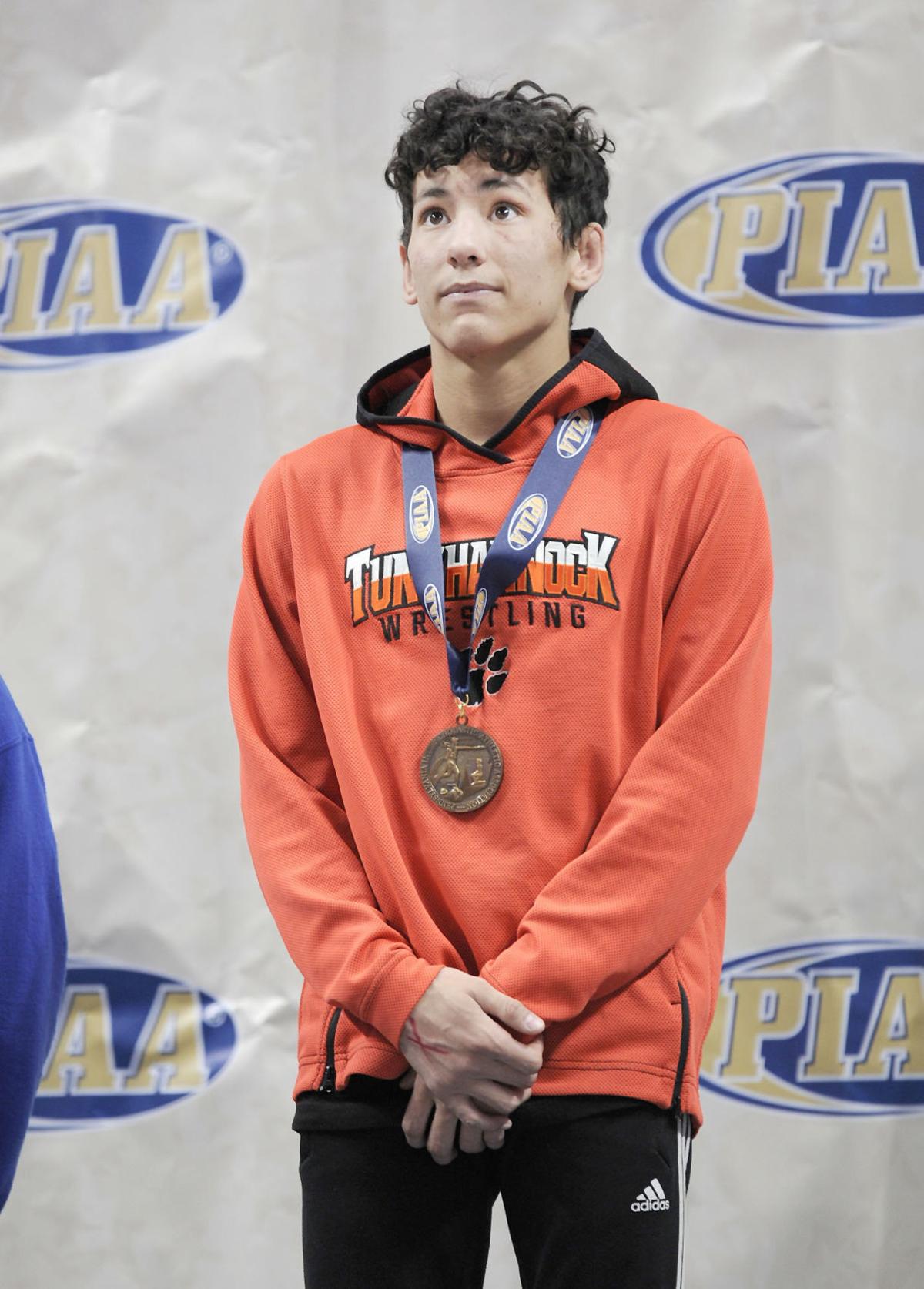 David Evans on the medal stand taking fourth place at 126 pounds after losing 1-0 to Jackson Arrington of Forest Hills at states at the Giant Center. 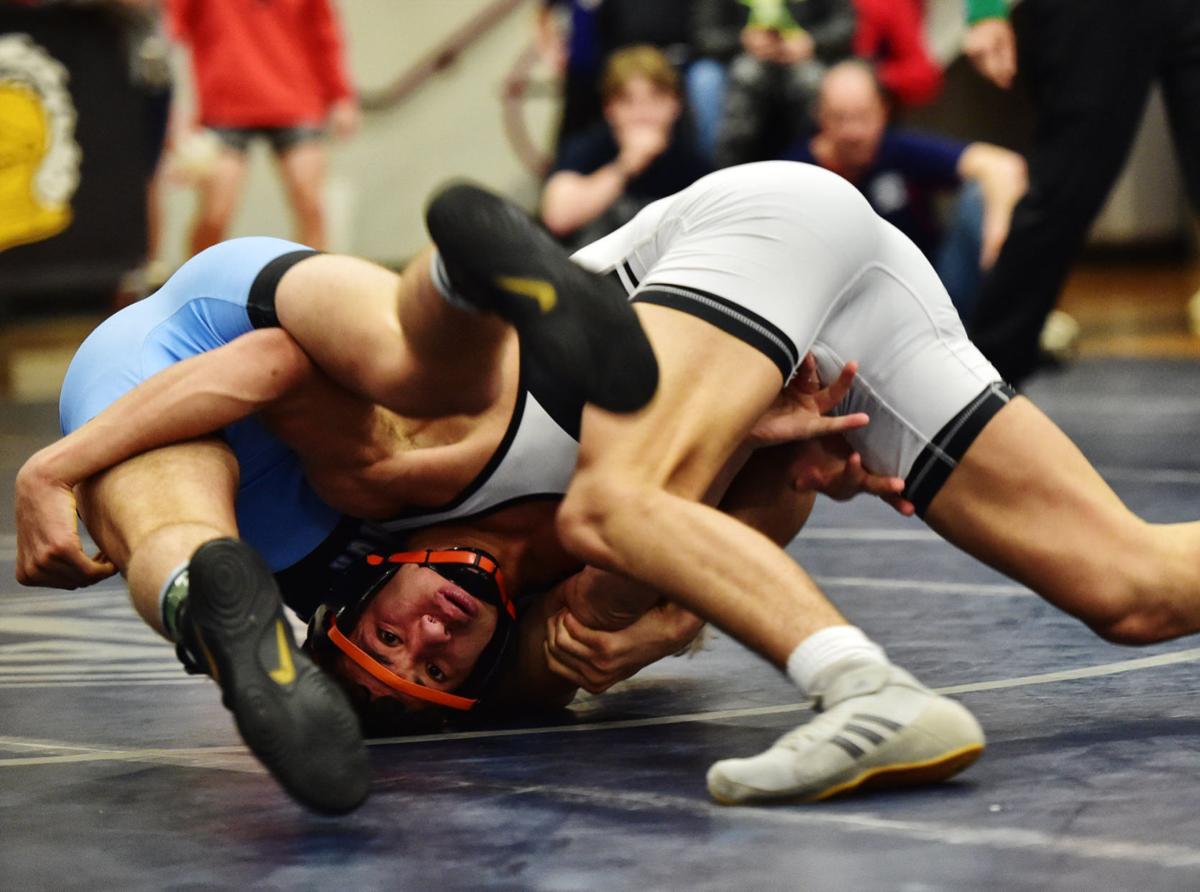 Tunkhannock’s senior Dave Evans, in white, puts a hold on Wilkes-Barre Area’s Nino Cinti during the 132-pound match at the Wyoming Valley Conference Tournament at Lake-Lehman High School in January.

David Evans wrestles Allentown Central Catholic’s David Kreidler in a Class 2A 126-pound match on the first day of the PIAA Wrestling State Championships at the Giant Center in Hershey this past March.

Dave Evans shows off a bouquet of Penn State Proud cookies prepared for him on his signing day. The senior will attend the Division I school this fall to wrestle and study orthopedic medicine.

David Evans on the medal stand taking fourth place at 126 pounds after losing 1-0 to Jackson Arrington of Forest Hills at states at the Giant Center.

Tunkhannock’s senior Dave Evans, in white, puts a hold on Wilkes-Barre Area’s Nino Cinti during the 132-pound match at the Wyoming Valley Conference Tournament at Lake-Lehman High School in January.

Wrestler Dave Evans has decided to turn in his Tiger stripes for Nittany Lion blue and white.

The recent Tunkhannock Area graduate will be a preferred walk-on to the storied program in Happy Valley under legendary coach Cael Sanderson.

“I am really excited to be coached by one of the best coaches and wrestlers in history,” said Evans. “I’m eager to learn from him and excited for this year coming up.”

“Both their academics and athletics are the best for me. I’m going into the medical field and their program is great for my interests,” he explained. “And the athletics are one of the best in the country. Learning from them is going to make me the best wrestler I can be.”

Evans added, “Pennsylvania is one of the best states for wrestling. No matter where you go, you’re going to see some great wrestlers. Going at it with (those wrestlers) only made me better in the long run, and I think it has prepared me to go after Division I wrestling.”

In his four years of wrestling PIAA District 2 Class AAA for Tunkhannock, Evans went to states three times, culminating with a fourth place medal this March. At the regional level, he finished second as a sophomore, and captured back-to-back golds in his junior and senior seasons. He finished first in districts for the last three years, after placing third as a freshman.

“Just making it (to states) was the best,” he said. “When I broke my arm junior year, I was told I had no chance of even wrestling in the postseason. And yet I made it to the blood round of states. This year, it would have to be making the podium with my good friend Gavin. We have been breaking records together all of high school and it was cool to accomplish the same goal in the end.”

But in the end, the highlight of Evans’ season was all of his hard work coming together.

“Definitely getting on that state podium. The last two years I had lost in the blood round and this year I was finally able to accomplish a goal of mine,” he explained.

“I was wrestling a returning state fourth place winner, and he was having a good season. I ended up majoring him to get into the semifinals where I placed in the top six,” he remembered. “After the match, I knew I had placed and it was the best feeling ever.”

Evans, who was a part of FBLA in high school, mostly focused his time on wrestling and school. He feels he will continue that path at Penn State, adding that most of his focus will be on wrestling and academics.

In the months since his medal claiming trip to Hershey in March, Evans has been staying on top of his training by using an Olympic weight set up in his garage.

He excitedly reported, “We have 300 pounds of weights, resistance bands, and some other things. Dalton Yeust and I have been working out almost every day getting ready for college.”

Yeust will head to Division I Monmouth College this fall to continue his pole vaulting career.

Evans, however, has not been able to compete with his travel team, as the coronavirus pandemic has canceled all competitions.

“All the teams I usually traveled with have been cancelled because of the virus. So I haven’t been traveling whatsoever when it comes to wrestling. I have just been lifting and running. I’m starting to wrestle again because some places are opening back up which is nice.”

In the past, Evans has been on national competition mats, showcasing his talents all over the country, including Tulsa, Oklahoma, Fargo, North Dakota for the freestyle and Greco national championship, Orlando, Florida for Disney duals, and Virginia Beach for NHCSA.

Evans also felt the loss of competition for the spring season, adding that he felt bad for the winter and spring athletes who lost their championships and season.

“This would’ve been my first year of lacrosse and I was doing it more for fun and to try something new, stay in shape,” he said. “I feel bad for the ones who missed their whole season because some athletes work all year for this time.”

Coach Sanderson has been in contact with Evans, talking about the school itself and the excitement that surrounds attending Penn State.

“We haven’t really talked too much on summer training, but as a team, we have been on plenty of phone calls and been texting back and forth. About this time, coaches would want us on campus to come meet them in person and get to know each other but that’s not allowed yet so we are just waiting to see,” he said.

Evans has been on campus before, for tournaments and competitions, and his cousin is also a PSU student.

“It’s gonna be fun having a family member down there with me,” said Evans. “I’m very social and I don’t see a problem with fitting in. We are all there to chase certain goals. I’m excited to learn from my teammates and coaches.”

As a preferred walk on, Evans explained that means the coach wants him to be a part of the team but can’t offer any financial assistance.

“I’ve had a great support system these past four years and am continuing to get support now from everyone with my decision,” said Evans. “I’m excited to compete at the highest level of competition. It’s been a goal of mine ever since I started wrestling.”

He added, “Without that constant support, I wouldn’t be where I am today.”

Evans feels that knowing he is going to be in the famed Bryce Jordan Center to compete is only going to improve his overall wrestling.

“I have the resources to be the best athlete and student, and just have to take advantage of what I have,” he observed.