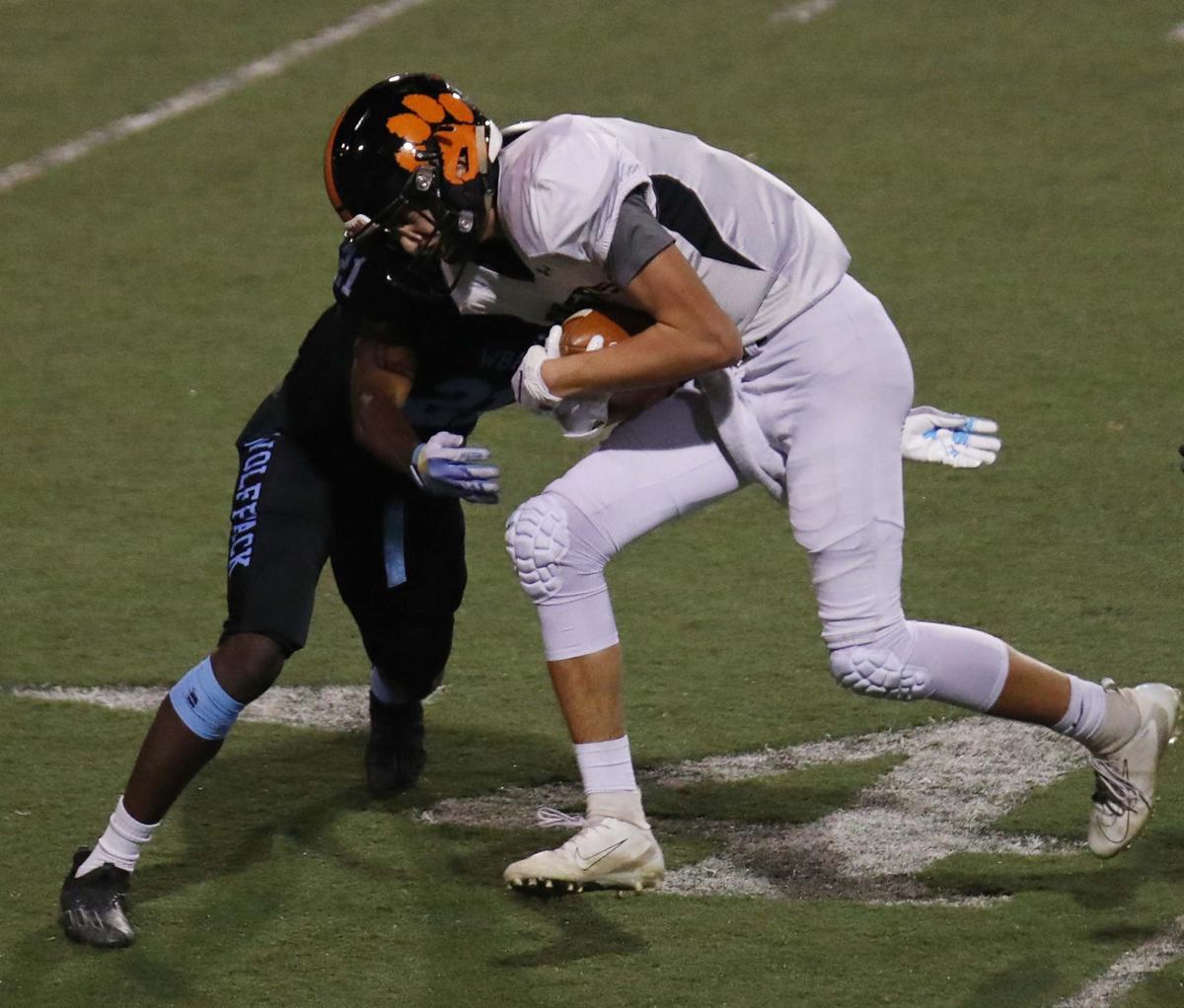 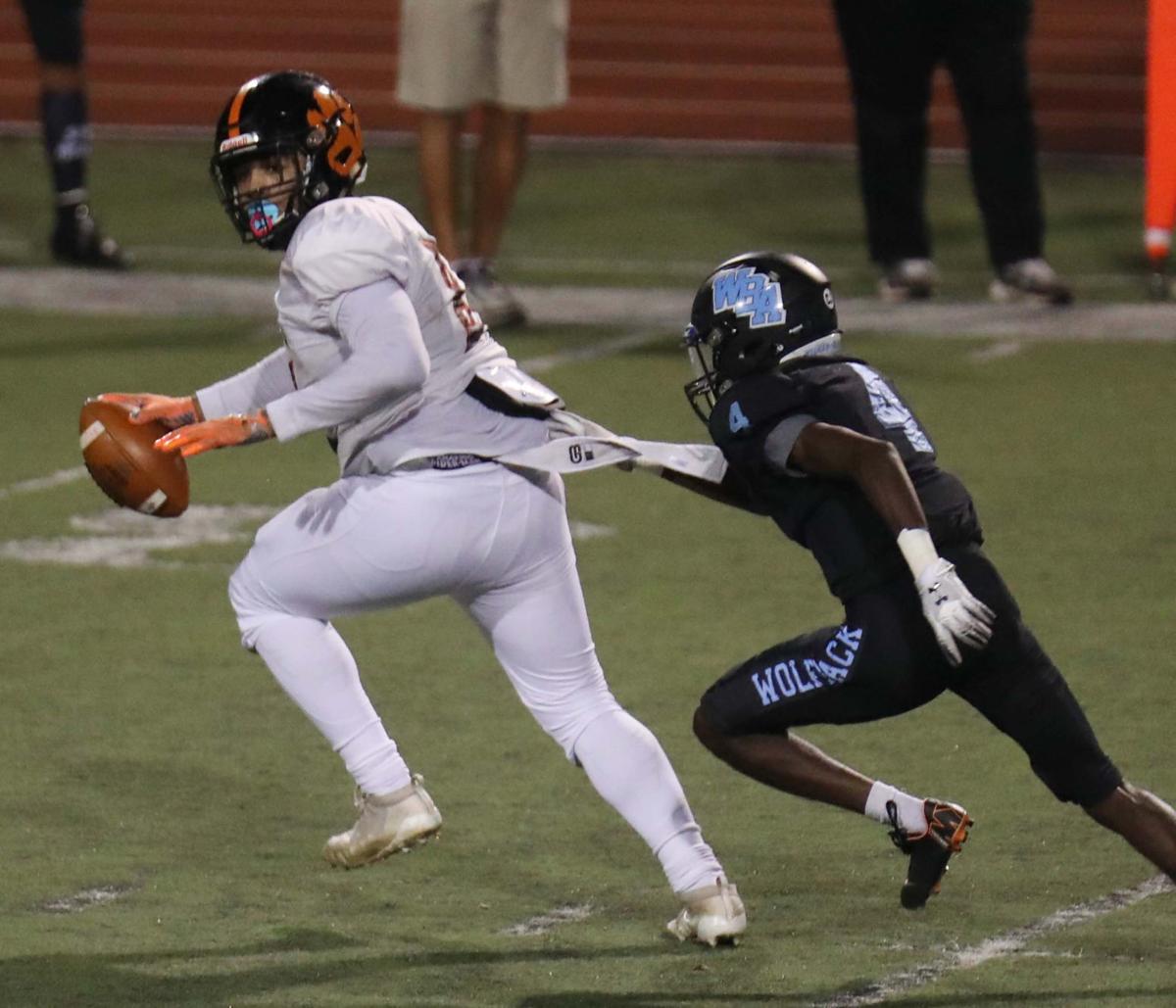 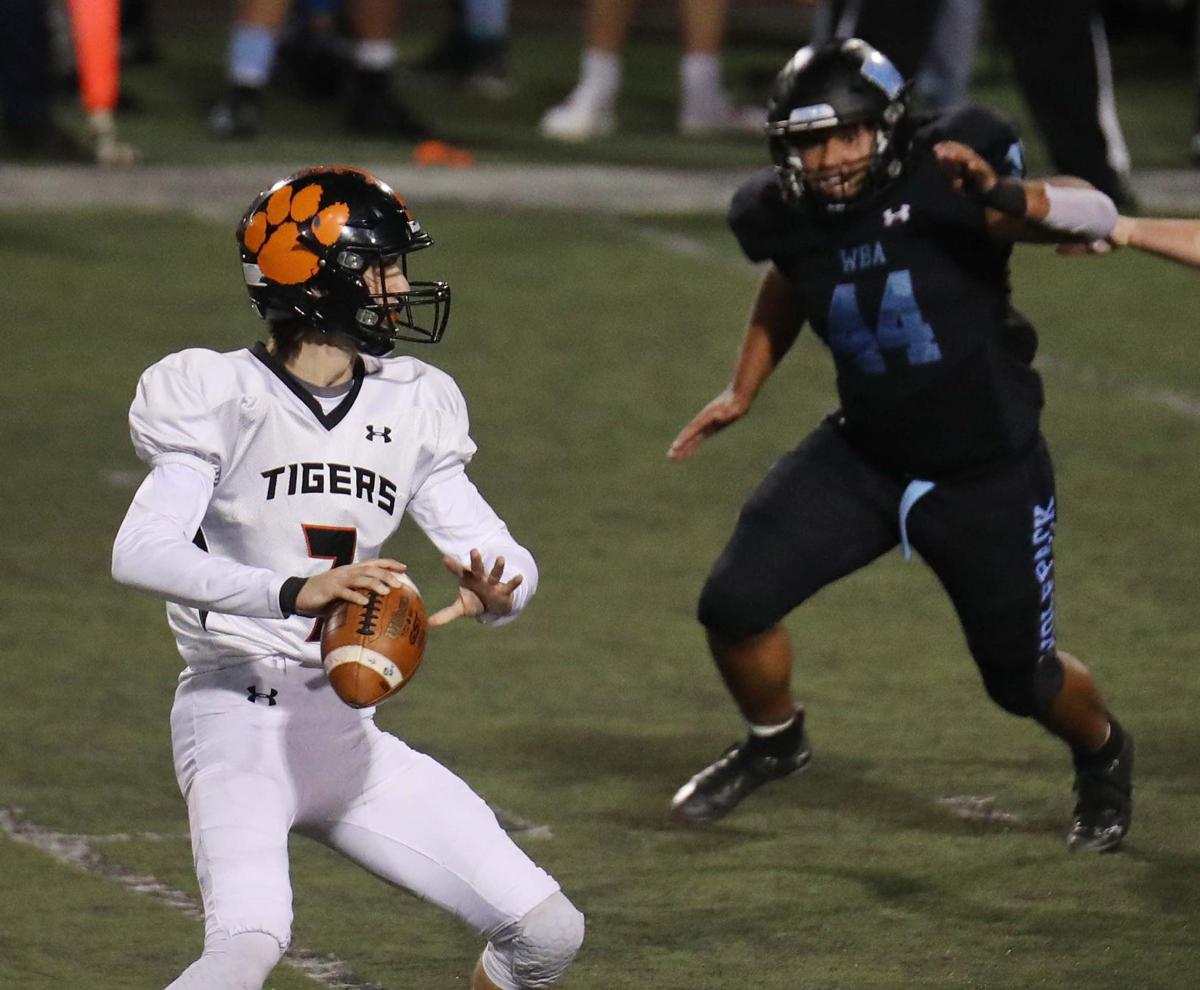 Tunkhannocks Jack Chilson looks to get the pass off as Wilkes-Barres Noah Taylor closes in to sack Thursday at Wilkes-Barre Memorial Stadium. 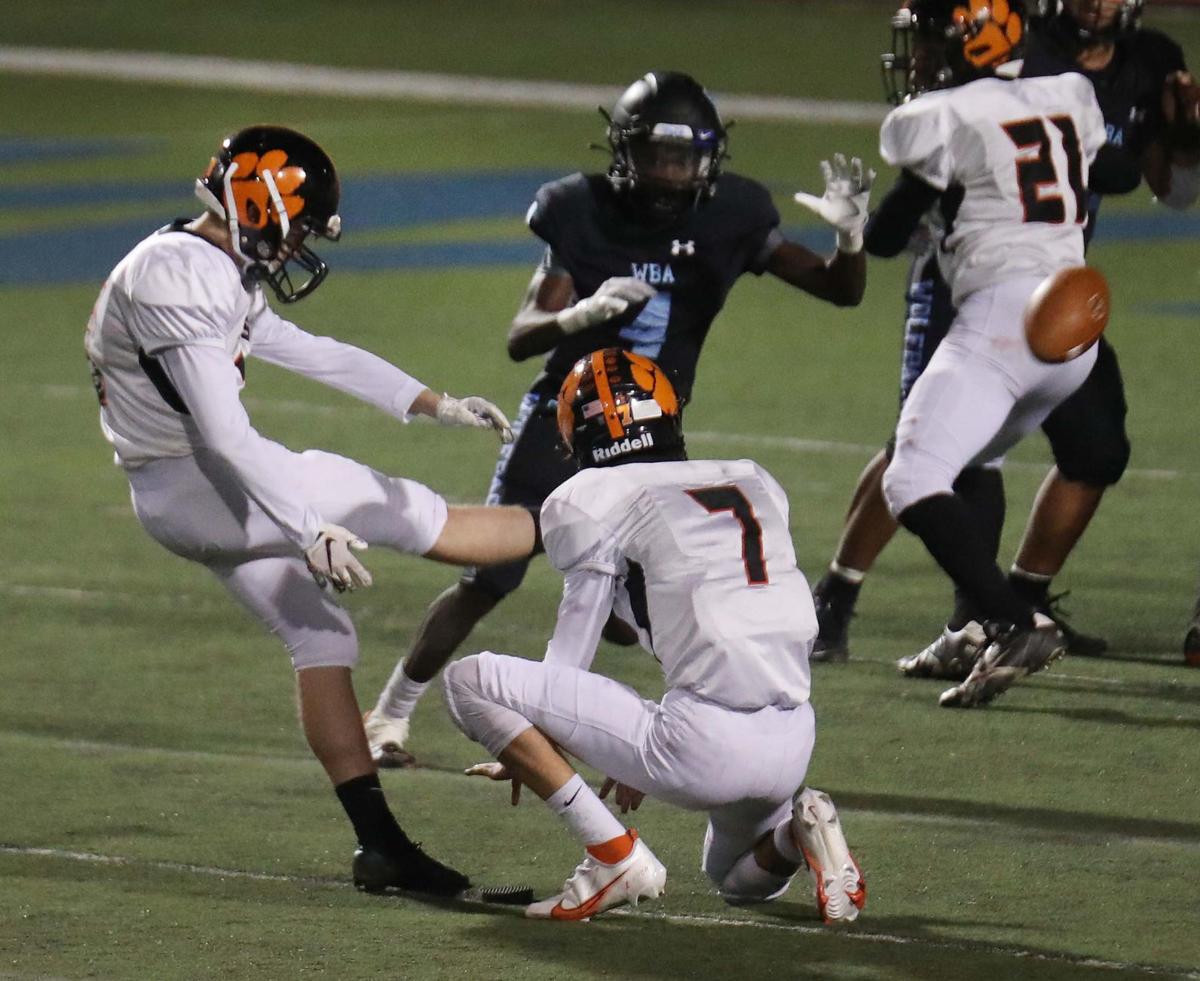 Tunkhannocks Gavin Montross gets the extra point off as Jack Chilson holds and Wilkes-Barre Elijah Jordan closes in to block at Wilkes-Barre Memorial Stadium. 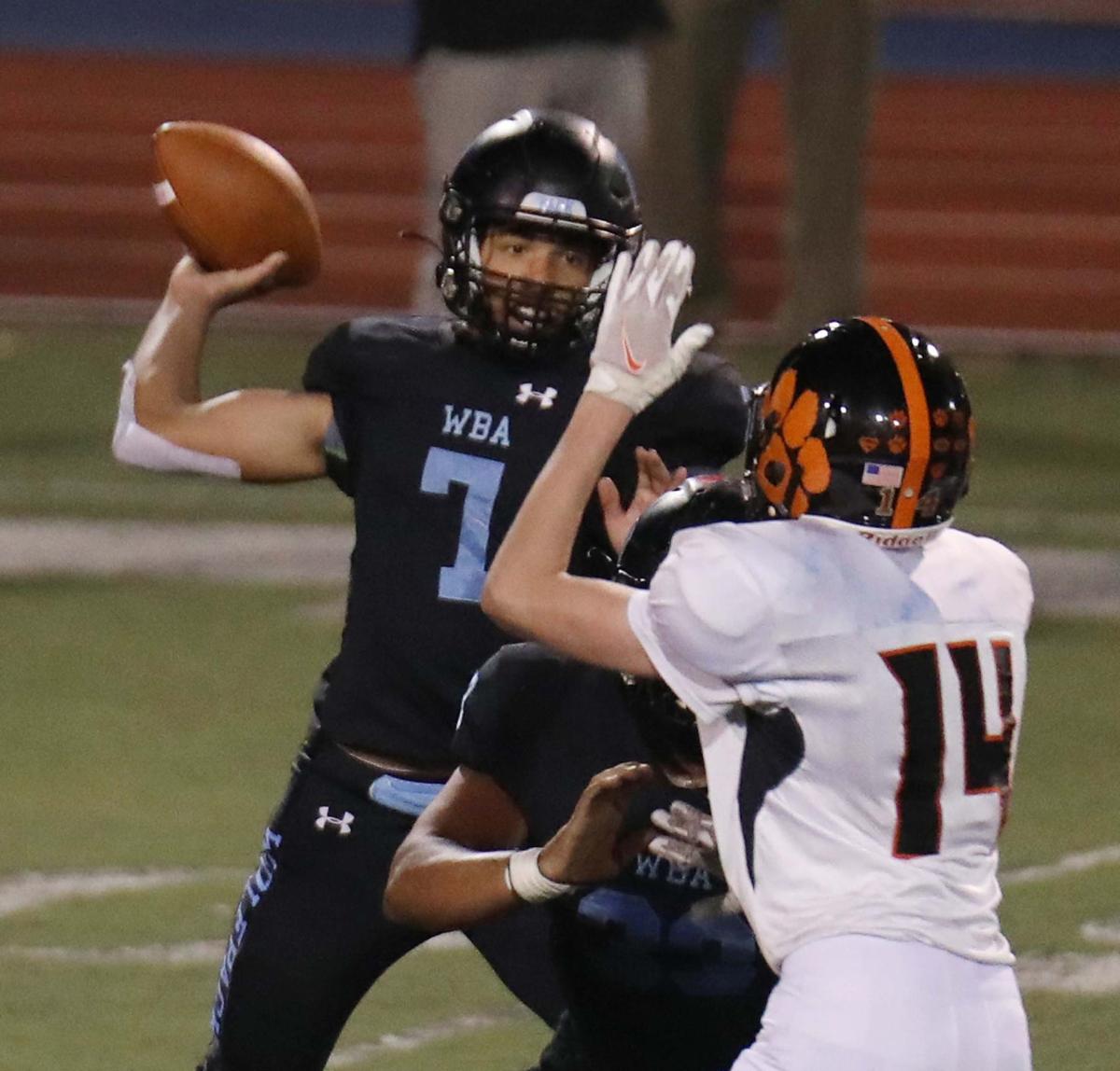 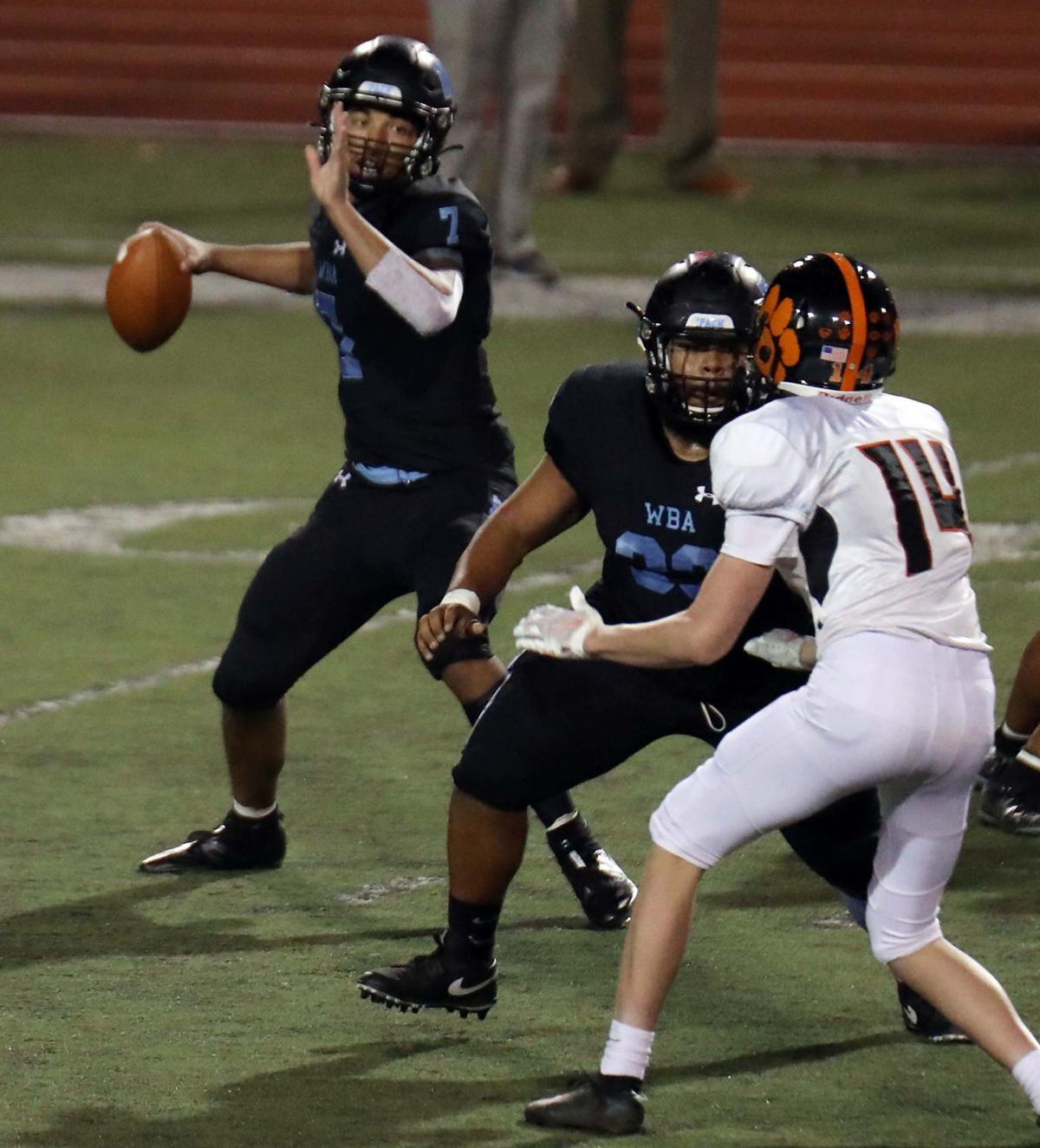 Tunkhannocks Jack Chilson looks to get the pass off as Wilkes-Barres Noah Taylor closes in to sack Thursday at Wilkes-Barre Memorial Stadium.

Tunkhannocks Gavin Montross gets the extra point off as Jack Chilson holds and Wilkes-Barre Elijah Jordan closes in to block at Wilkes-Barre Memorial Stadium.

In a short week, the Tigers headed to Wilkes-Barre Area to face the Wolfpack, and came away with a loss.

What was anticipated to be a celebratory night to honor the senior members of the Wilkes-Barre Area football team took a somber turn moments before kickoff.

That was when word spread to the Wolfpack locker room that head coach Ciro Cinti’s father, Ciro, had died. Coach Cinti was not at the game, but his brother Nino, an assistant coach with the Wolfpack, was.

So with heavy hearts and a great deal of determination, The Wolfpack went out and won their final game of the season, 35-28, over Tunkhannock on Thursday night at Wilkes-Barre Memorial Stadium.

“For what happened, the kids responded really well,” said Ed Michaels, who acted as the interim head coach. “It is a real credit to the entire assistant coaches. They were the ones who got them focused on winning their final game of the year. Nothing can replace what happened this evening. It was a good way to end on a positive note.”

The Wolfpack ended their abbreviated season 3-3, finishing two games shy of the originally scheduled eight-game regular season due to COVID-19 issues. But it was Kam Taylor, appearing in his third game of the season, who left a lasting impression.

Tunkhannock agreed to play Wilkes-Barre Area and if you weren’t there you missed out.

Tunkhannock coach Mike Marabell was looking to play as many games, but he didn’t have to agree to play the Wolfpack. He could have found the Tigers an easy victory.

But, it gave the Wolfpack one final chance at a game, and for the entire program to celebrate Senior Night. The kids from the Wilkes-Barre Area football team were thankful. So much so that several of them approached Marabell following the game to thank him for giving them the opportunity to play one last game in 2020.

Taylor finished the night 8 of 16 for 231 yards and three touchdowns. Taylor missed two games due to injury and had two more canceled because of COVID-19.

“It was a great game to come back to; I wanted to come out and show I was still a good player,” Taylor said. “A lot of people forgot about us. The seniors wanted to go out on a high note.”

Taylor connected on a pair of big plays, hitting a 70-yard touchdown pass to Javant McClary and one for 62 yards to Maleek Robinson as the Wolfpack took a 14-0 lead at the end of the first quarter. Tunkhannock cut the lead in half when Riley Jones caught a 6-yard TD pass from Jack Chilson midway through the second quarter.

It was in the third quarter when the game really started to get fun.

Each team scored three times, with Jhamal Zacharias catching a touchdown pass from Chilson, Ty Konen rushing in from 2 yards out and Chilson scoring on a 3-yard run. All three of Tunkhannock’s touchdowns were set up by big plays from Chilson’s arm. Chilson finished the night 21 of 32 for 291 yards and two touchdowns.

Chilson has 5,176 career yards passing with at least one more game to go Friday at home against Honesdale. Chilson ranks seventh all-time in the Wyoming Valley Conference. He is 135 yards behind former Nanticoke Area star Gary Phillips for sixth on the career passing yards list.

Wilkes-Barre Area used the big play to score its three touchdowns, with Elijah Jordan hauling in a 68-yard pass from Taylor, Robinson scoring on a 50-yard double-pass from McClary and Taylor capping the scoring with a 12-yard run.

“Chilson is a great quarterback, he made every single throw to keep his team in the game,” Taylor said. “Overall this was a great way to go out. I always wanted to face him. I have known him since I was younger. I know he is another elite quarterback in the Valley.”

Chilson had one last chance to lead the Tigers down the field to potentially tie the game when the offense took over on its own 14 with 1:29 left. Chilson completed two passes to get the Tigers out to the 29, but with no timeouts, Chilson spiked the ball and threw an incomplete pass to set up fourth down.

Wilkes-Barre Area linebacker Anthony Nguyen ended Tunkhannock’s hope when he shot through the line of scrimmage and recorded a sack, giving the ball back to the Wolfpack.

“It was a tough couple of weeks,” Taylor said. “First with me getting injured and missing games I could have helped the team win. Then finally getting back and finding out we had a COVID situation in our district. We were lucky to get this last game. I’m just happy we were able to come out on our Senior Night and get a win.”