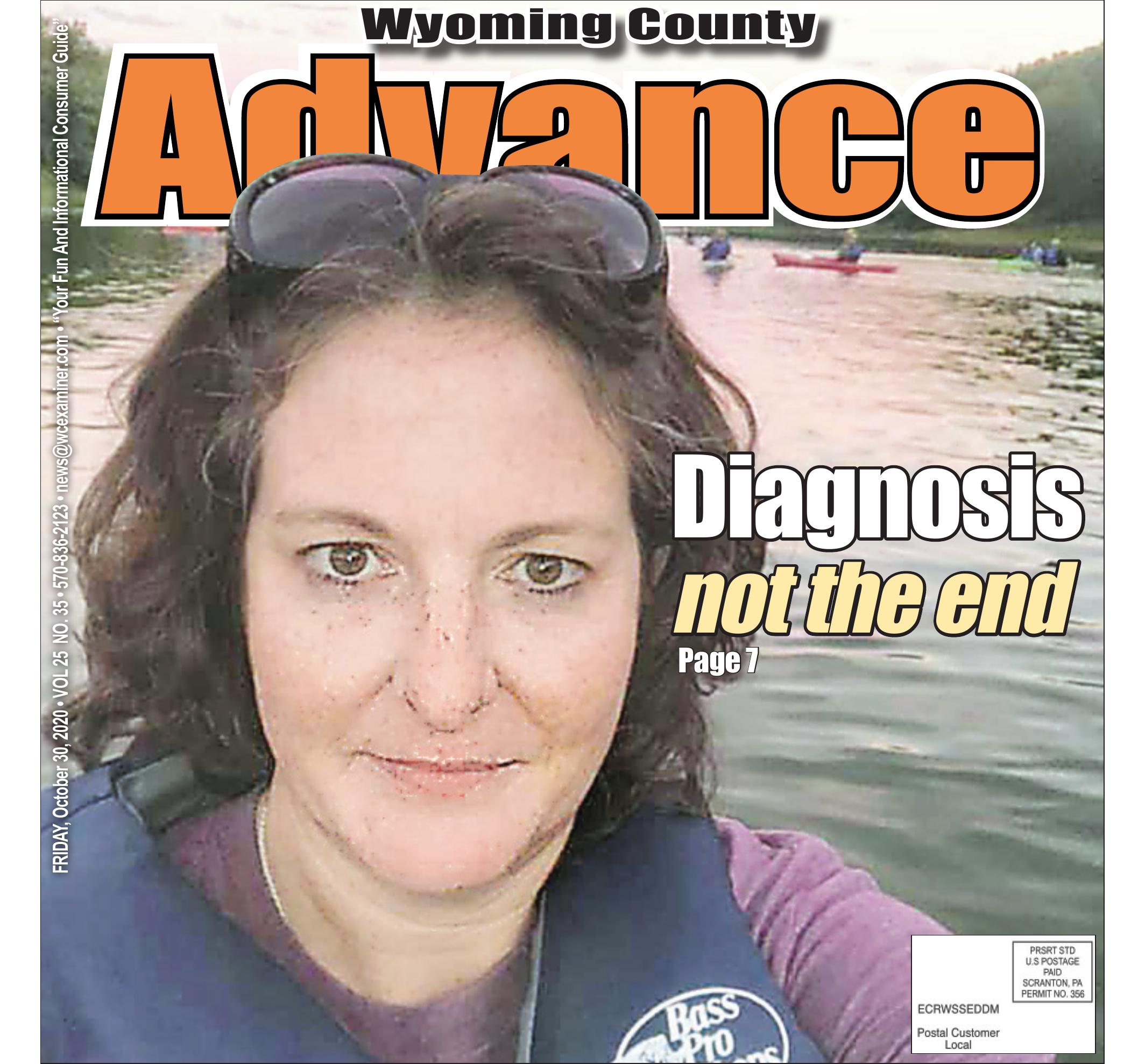 Zz-dnp
Diagnosis not the end

Sue Graham vowed to not miss anything due to her breast cancer diagnosis in 2018, including kayaking at sunset this past summer.

Everything was normal. Uneventful.

Just a mom and son, playing basketball over Christmas break in 2017.

The one-on-one was going strong, and Sue Graham, 46, felt she could school her son Trever, a member of Elk Lake’s soccer, basketball, and baseball teams.

“I went up to get the rebound, and he jumped at the same time,” she recalled. “He elbowed me in the boob, and it hurt, but we continued to play and life went on. I wasn’t going to let him know it hurt.”

A few days later, Graham noticed a lump had formed, and thought “Wow, he really got me.”

The following February, after constant pressure from friends and family, she went to her family doctor.

Graham went for a breast ultrasound mammogram on March 28, 2018, three months after the initial discovery.

She remembered, “I could tell something was wrong by the way the nurses were looking at me. The doctor said he couldn’t tell for sure what it was and I would have to come back for a biopsy. On March 30, I had the biopsy, and on April 2 I learned it was cancer.”

Since 1985, October has been recognized as breast cancer awareness month, and unfortunately, has grown with each year as the need for awareness and advocacy has only increased.

Early awareness, education, and a fierceness to fight are often as associated with the disease is the international symbol, the pink ribbon.

Looking back, Graham said, “I was never really a fan of October. I felt so much time and energy was spent on breast cancer and wondered ‘What about the other types of cancer?’ My pop had four types of cancer.”

“I never realized how many different types of breast cancer there was until I went through this,” she added.

As Graham, a Blue Ridge middle school math teacher, began to process the information, she simply repeated to her husband, Bob, “I just don’t have time for this. I will do what the doctor’s say, and beat this, because this isn’t in my plans.”

After telling her children and family, she took a leave of absence from school.

“I am very thankful I was able to take a year off,” she recalled. “At Blue Ridge, we can only take a half or a full year, so I took the entire year. My treatments ended two weeks into the second half of the year, so I was able to travel and reflect.”

She said, “Not many people knew what to do or say around me. My husband freaked out. My brother thought it was a death sentence. Friends I hadn’t spoken to in years messaged me on social media, and some friends I spoke with frequently avoided me.”

“People want to help, there are some that tell you what they would do, what you should do, and some don’t know what to do,” Graham said.

Graham did not post her diagnosis on social media right away. She was torn because she didn’t want people to think she was looking for sympathy, but decided it was time after she saw a distant relative who didn’t know.

“Once I saw the look on their face, I knew I had to put it out there,” she admitted. “At first people were shocked, and said they would pray for me, which was great. Before cancer, I would post positive and inspirational posts on my Instagram and Facebook. I had always loved the power of words and quotes and knew how important a positive mindset was.”

So important, in fact, that a good friend picked up where Graham left off and took it upon herself to send a positive text every Wednesday morning, Graham’s treatment day.

“It honestly kept me going. She also allowed me to scream, cry, yell whether I was sad or mad, then told me to put my ‘big girl pants’ on,” she said.

Treatment for Graham’s cancer, which was diagnosed as Invasive Ductal Carcinoma or IDC, included a lumpectomy followed by months of chemotherapy and radiation.

The lumpectomy, or partial mastectomy, was performed about a month after the biopsy. The lump was about three centimeters in size, an increase from the one and a half centimeter size it was when it was discovered.

Graham had a clear mammogram in November of 2017 and has no family history of breast cancer, but still got a full work up of genetic testing, a full PET Scan, and a body scan.

“I just kept thinking this was a hiccup, a bump in the road,” she said.

The worst part, she said, was the physical pain from the surgery, but credited her amazing surgeon at the Henry Cancer center at Geisinger Wilkes-Barre for helping her get through. She also said that the decision to put her radiation port in during her surgery was ‘super helpful’ as it caused less work and stress later on.

Another reason Graham decided to go public with her diagnosis was because it was coming up on fair season, and the 4-H advocate knew she wanted to continue her life showing sheep at the Harford Fair.

“So I shaved my head completely bald. I woke up one morning and there was a clump of hair on my pillow, so I figured it was time. It was my husband’s birthday,” she said. “My brother, Charlie Clark, had been growing his hair out, waiting for me to be ready, so he shaved his head alongside me. My friend Misty Finch did it for us.”

Consequently, shaving her head revealed a scar from when she was five-years-old.

She laughed, “Apparently, Charlie pushed me off a bed. I didn’t realize I had the scar until I was in college, but when we saw it again that day, Charlie told me it was all going to be ok. He said he made me tough enough to deal with that, so now I can handle anything.”

She monitored multiple social media chat rooms and groups, something she doesn’t recommend, saying it caused more questions than answers, but did find some solace in chatting with people in the same situation.

“I had insomnia from the steroids I was taking, plus my mind was always racing with a million thoughts, and I realized how itchy my head was,” she said. “A survivor told me to use a lint roller on my head, and it was a game-changer.”

Graham admitted to a few missteps along the journey, including a constant brain fog to which her kids lovingly referred to her as ‘Dory,’ the absent-minded fish in Disney’s Finding Nemo movies.

“I refused to miss anything my kids were doing because of cancer,” she added.

April 12, 2019 is her Survivor Day, or the day she was granted the all-clear diagnosis.

“It is always in the back of my mind, when is it going to come back,” she said timidly. “I have been told that most of the time it doesn’t, but I do have a family history of other types of cancers. Every time I see a mark on my body, I wonder if I should call a doctor. When I get pain in my legs, I want a bone scan so that we can rule things out.”

She will have an MRI and an ultrasound every six months until her doctors tell her not too.

“This was a slap in the face- a wake-up call even- for me to slow down and take care of myself. It was hard for me as a mom, a teacher, a woman who is needed, to step back and have other people take care of me,” she said. “My mom was a huge part of this journey. Who else would take me to my blood work, my chemo, my treatments? From start to finish it could be upwards of eight hours a day in the hospital, not even including the drive there and back.”

In the winter of 2018, between finishing chemotherapy and beginning radiation, Graham learned that her coworker at Blue Ridge, Jackie Lynch, had nominated her for the “Pink Santa Hat Movement”

“And I won,” she exclaimed. “This is a movement that began because a teacher wrote a letter saying why her teacher friend, who was going through breast cancer, deserved a trip. Jackie submitted my story, and we won a free trip to Atlanta that included a photo shoot complete with hair and makeup services, massages, slippers, a $150 gift card for their local mall, and a gala. It was all made up from educators across America that were dealing with breast cancer.”

“This is my story, my journey,” she said. “But there are so many others out there on their own path to handling this disease. People need to know they are not alone.”

Graham suggests that those who receive a cancer diagnosis learn quickly to lean on people for support.

She added, “Take someone with you to all your appointments because your head will start to spin with all the information they throw at you. You will not remember what the health care team says, might not even understand it all, so having someone there to write it down for you is a huge help.”

Graham is back in her virtual classroom, and attending her son’s limited sporting events. Though she is not immunocompromised from her breast cancer, she is still cautious.

“Right now, I am taking each step as it comes,” she said.