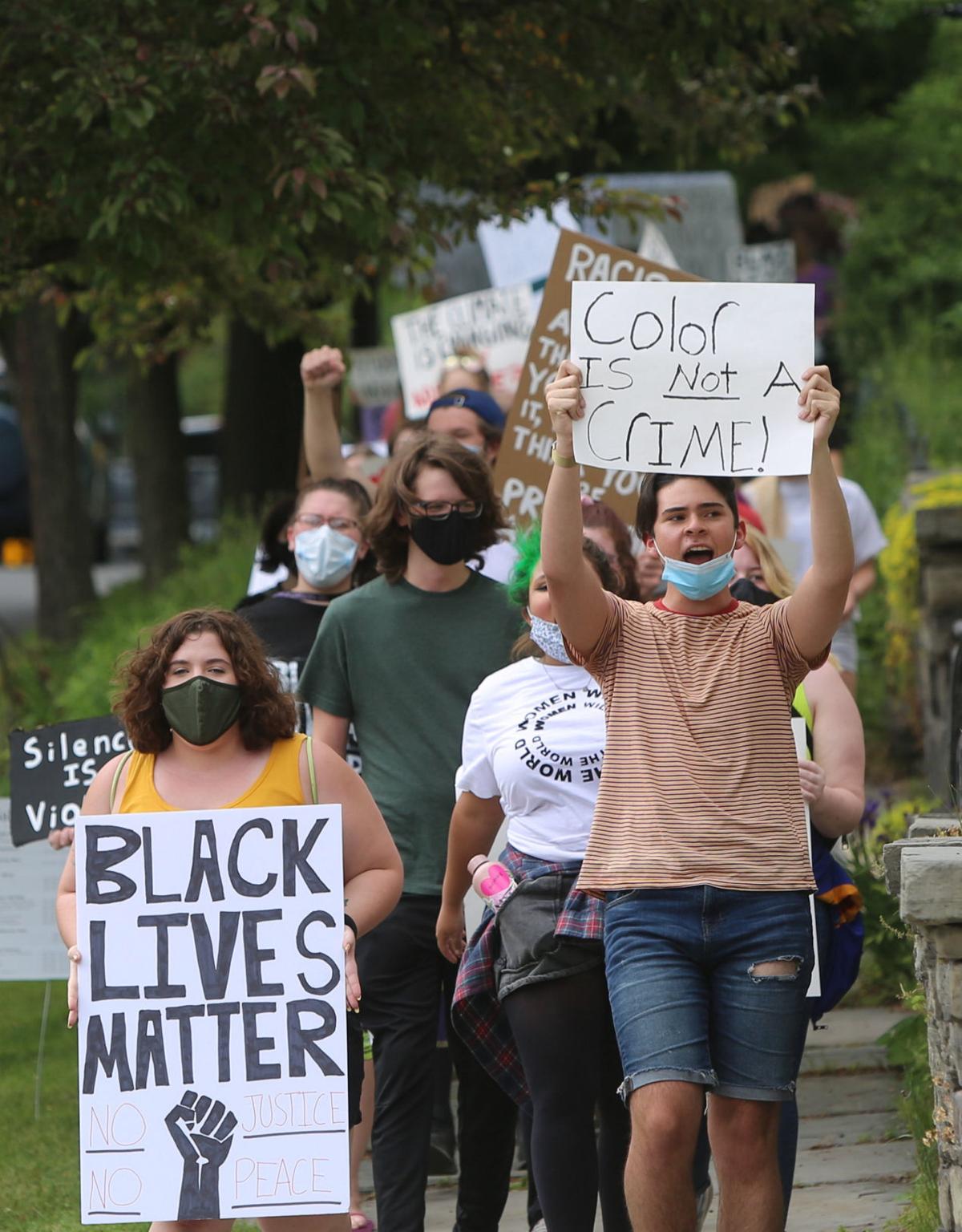 Following an orientation at the courthouse lawn, students march down Tioga Street to take their positions near the Tioga Street-Bridge Street intersection.

With ralliers revved up by a chant by Kira Deremer (in front), they get a boost when a car goes by. 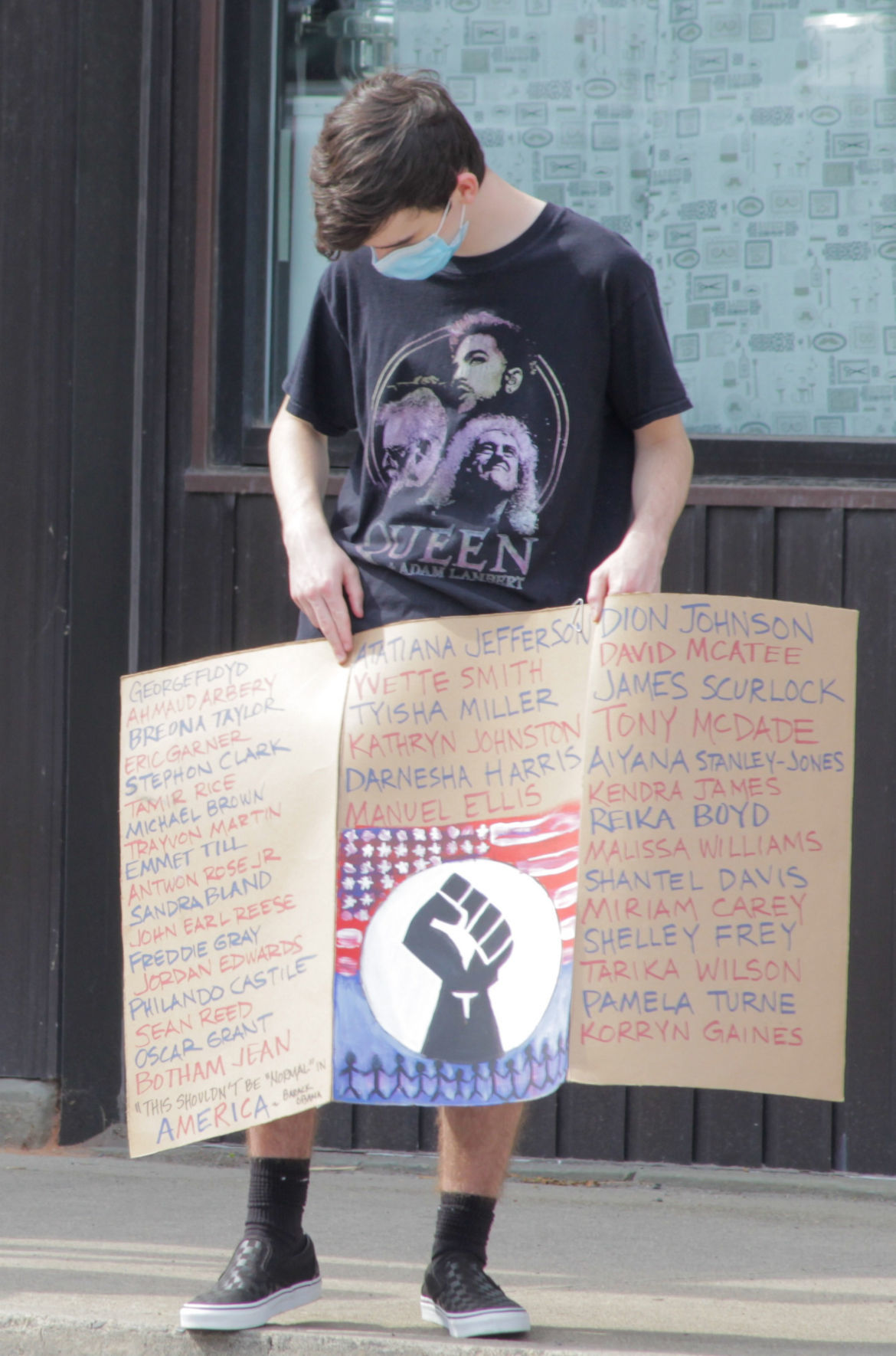 Jacob Stephy ponders all of the senseless deaths that have come over recent years from police butality. 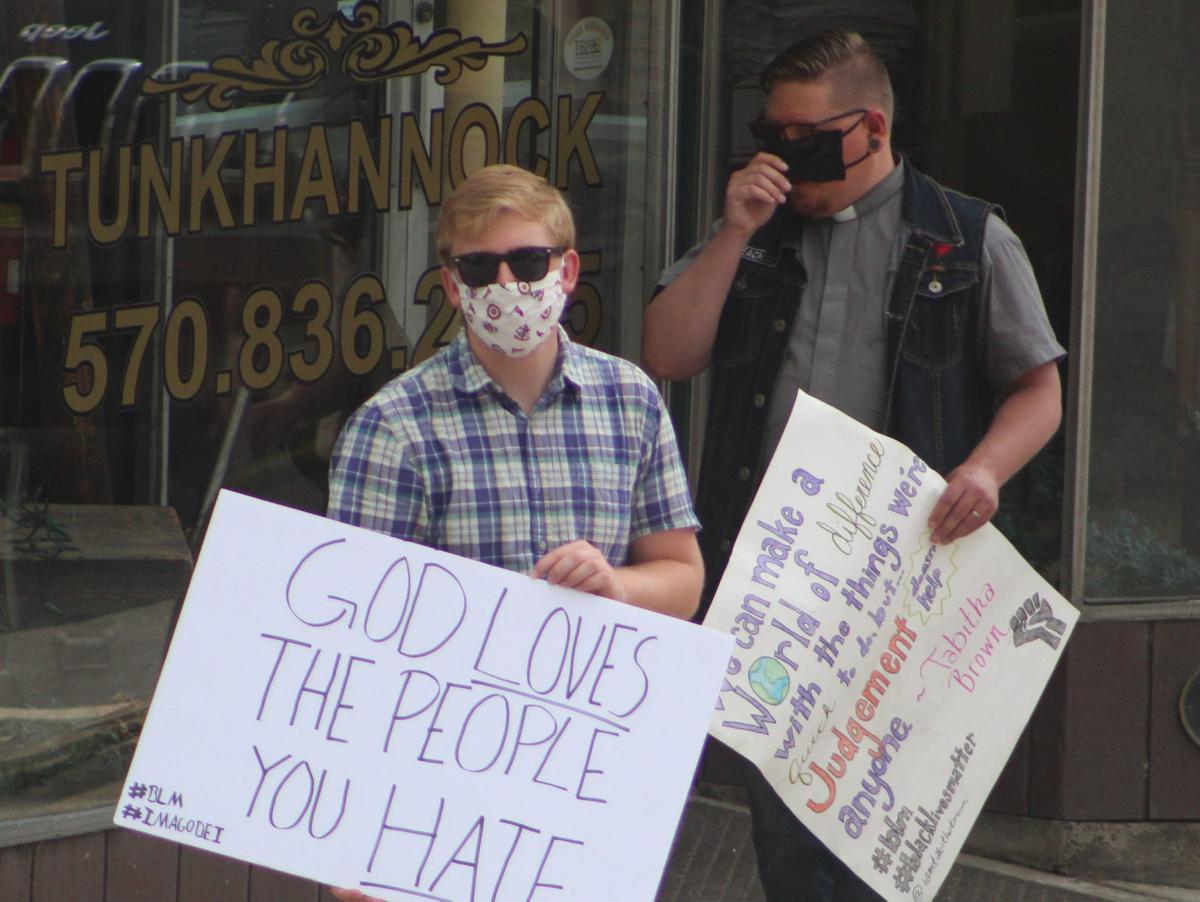 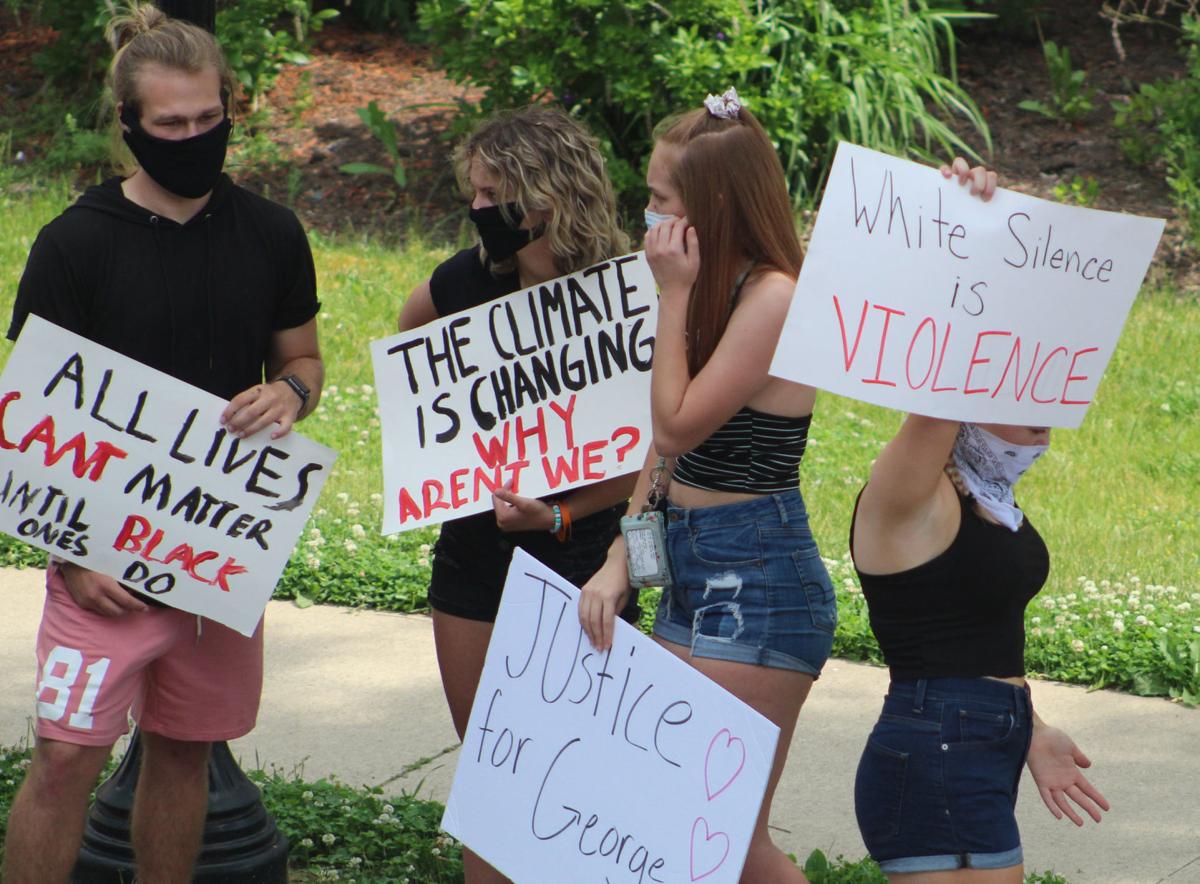 A handful of messages greet passersby.

Following an orientation at the courthouse lawn, students march down Tioga Street to take their positions near the Tioga Street-Bridge Street intersection.

With ralliers revved up by a chant by Kira Deremer (in front), they get a boost when a car goes by.

Jacob Stephy ponders all of the senseless deaths that have come over recent years from police butality.

A handful of messages greet passersby.

Around 150 persons staged a peaceful rally in downtown Tunkhannock Friday afternoon to raise awareness of racial injustice in one’s home community and the nation and world as well.

They gathered around 2 p.m. on the courthouse grounds, and were greeted by Wyoming County Commissioner Tom Henry who congratulated the students for exercising their Constitutional rights responsibly. He also agreed to offer whatever support he could, and encouraged them in their noble cause.

Tunkhannock Area High School student Anthony Eckert was one of the organizers of the event, and admitted he was a bit of a novice.

But his charges were clear about their mission for the afternoon, and following a few minor introductions, the mostly high school students marched to the downtown area of East Tioga Street and fanned out to about a half a block east and west, and south of the Tioga St.-Bridge St. intersection, where with homemade placards they shared messages they felt needed to be shared with anyone who would look.

For a couple of hours from 2:30 to 4:30 p.m., TA alum Kira Deremer at the southwest corner of the intersection and current student Rosalee Culver from the southeast corner offered chants back and forth to keep the crowd energized.

All of a sudden three or four vehicles might pass by and honk their horns which kept the ralliers revved up; or if a tractor-trailer rig happened through town, truck drivers would give a blast to keep them charged up.

Eckert said, probably all told, only a handful of folks actually shouted something racist or contrary to the students’ message, but were easily out shouted by their fellow comrades, who were buoyed by a car honk.

“There really were no serious confrontations,” he said Monday morning after a couple of days to reflect.

Why talk about racial injustice now?

Eckert said, “I think certainly people gave concern to it before George Floyd’s death, considering he’s one of many to be murdered unfairly by the police, but his death has definitely been the tipping point for many people and the current movement has much more momentum behind it” than anything previous.

He said he would not be surprised to see another rally in Tunkhannock in a couple of weeks.

For now, though Eckert said, “I think people just need to keep talking about it and how we can improve in our daily lives. We need to start challenging that one relative, friend, or coworker who does or says things that they may not even realize come off as racially insensitive. And, people need to understand that we live in such a small bubble here in Tunkhannock. There’s much more world out there to see that has completely different issues and problems than we do.”

He acknowledged the school district itself could make small changes to facilitate the conversation, “and it needs to start at a young age,” remembering when in elementary school, teachers calling the beigeish color crayon ‘skin color.’

That risks people thinking of white as the default, and other races often considered deviations from whiteness.

Eckert said if people start with small changes, and their neighbors do as well, they can actually lead to bigger things for a better world.

I am fathered dismayed at an article such as this. Promoting a completely false premise and continuity g the dangerous narrative that the mainstream media is trying to pawn off as the “new normal.” This is anything BUT normal. America is, by far, the least racist country on the face of the earth and for a teacher to gather a bunch of youngsters who probably think they are doing the right thing is irresponsible and damaging. While the Constitution of the United States does allow for peaceful assembly (and this was) we have to be careful, very careful, as these can turn bad on a dime. Once groups such as Antifa are aware of things like this is when they I infiltrate Small Town, USA and wreak havoc. The poster the young man is holding states, “Color is not a Crime” unless you are “white” and then you are guilty of “white privilege.” The parents of these students should be aware of what their. Hold ten are being taught in school before their. Hold ten are brainwashed to this sort of negligent education. I say negligent because the whole story has not been portrayed. While no one should die in the manner that Mr. Floyd did let’s remember he was a criminal who was arrested many times and during an armed robbery, put a gun to a pregnant woman. So needless to say we are lauding criminality instead of good moral fiber. Pathetic.

This article is disgraceful . Tunkhannock is a special place because for the most part it has not been infected with leftist, America hating, political correctness. However here we have young, misinformed high school students defaming America and law enforcement while spreading propaganda and touting the worst group of people in the country Black Lives Matter, a Marxist, racist organization that hates America and seeks to destroy the nuclear family as part of their malicious program. First there is no epidemic of police violence against Blacks, that is a lie. The opposite is actually true. It’s obvious to anyone that the force used on George Floyd, a career criminal who had been convicted and sentenced previously for sickening violent crimes was excessive and unnecessary. However police make over 10 million arrests a year and this was an anomaly. Statistically a police officer making an arrest on a Black suspect has a far greater risk of being murdered than the suspect. It’s not racist to say so it’s simply a fact. Black Lives Matter has led violent protests along with their ally Antifa that swiftly became riots in which people were murdered and injured . Rioters destroyed billions of dollars of property. Middle class business owners were wiped out in the orgy of violence that characterized the “mostly peaceful protests” as the riots were called by leftist media.

What is alarming is that these young people have been brainwashed to believe the opposite of what is true likely by leftist teachers embedded In Tunkhannock’s school system. However what is most disgraceful is the endorsement of this perfidy by County Commissioner Henry. Due to his endorsement of the lies and slander of America by Black Lives Matter he should immediately resign.