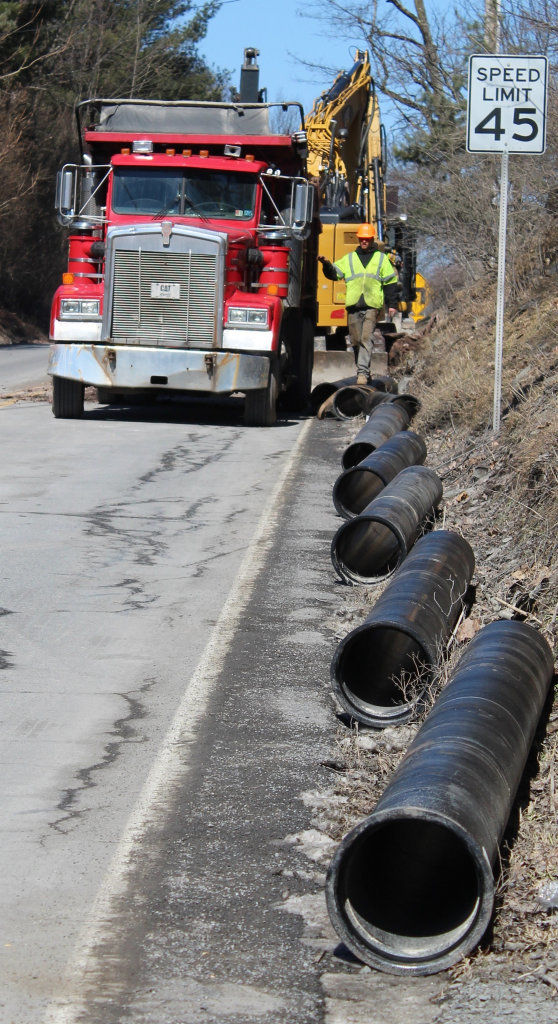 Contractors are putting in piping along Rt. 29 north of Tunkhannock which will eventually take water out of the Susquehanna River to an impoundment in Lemon Township that supports Marcellus activity there. 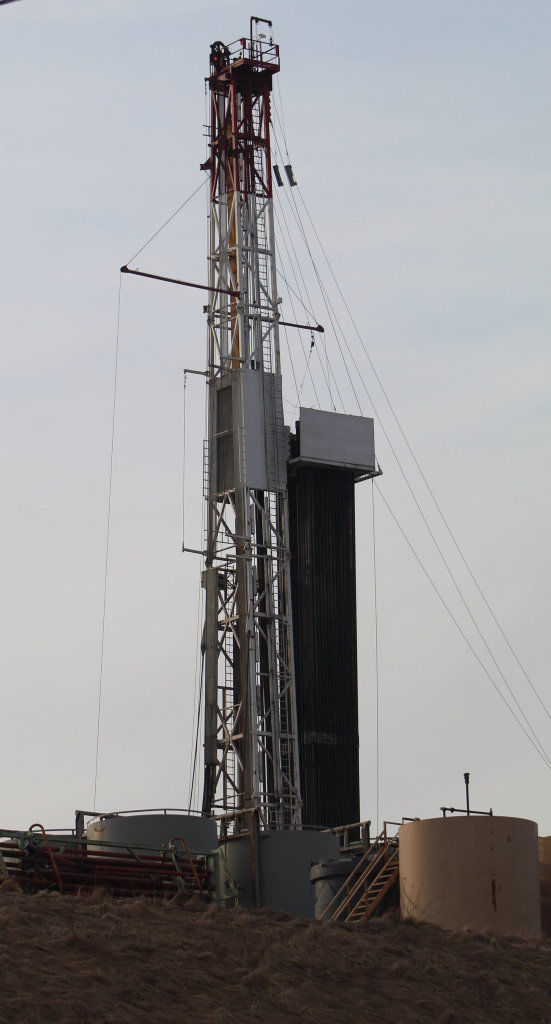 STAFF PHOTOS/ROBERT BAKER BKV has a drill rig at the P&G Warehouse site in Meshoppen Township.

Three years ago when Ben Whitaker graduated from Valley View High School, he wasn't quite sure about his future, but knew he would like it to be outdoors.

Today as a lead well tender for Cabot Oil &amp; Gas, he likes the opportunities placed before him.

A graduate of a 2-year program in Lackawanna College's School of Petroleum and Natural Gas, Whitaker is happy to put what he learned in the classroom to good use in the gas fields of Susquehanna County.

"They gave me a good overview of compression technology," Whitaker says of the PNG program, "and now I'm seeing clearly how it all fits together."

His quick advancement from technician to well tender to lead well tender and foreman also reveals the trust Cabot has placed in Whitaker.

It is the latter where Whitaker has harnessed his training.

Three years ago Flowers was among the most prolific gas wells not just for Cabot, but in all of Pennsylvania.

Whitaker has responsibility to oversee 8-10 Cabot locations, inspecting 30-35 wells to make sure they are functioning properly, adjusting pressure gauges and valves, and addressing safety matters to ensure optimal production levels are achieved.

He said the most interesting part of what he gets to do on a daily basis is troubleshooting. "I enjoy the challenge to optimize a process and there are always things you can try to better your equipment or flow rates."

Jannine McKnight, PNG program director for Lackawanna College, speaks highly of Whitaker's quick advancement, and notes that it's not an isolated situation.

"Right now there's more demand for our students, than we can possibly fill," McKnight says rather matter-of-factly, and expects all of her May graduates to have good paying jobs within days or weeks of leaving the classroom, if they don't have one already.

She proudly notes that graduates can expect to start at $40-60,000 per year in their respective fields.

"It's quite a gem of an opportunity to have a company with benefits and a 401K program early on as well as a company truck to drive," she said.

"With boots on the ground, technicians are the backbone of our society," McKnight added, "and the companies really value those who put their skill sets to good use."

Cabot's Bill desRosiers said that the Flowers' wells that Whitaker monitors continue to produce at a solid pace.

He acknowledges that Cabot's footprint is only in Susquehanna County where it continues to keep three rigs and two completion crews busy.

desRosiers smiles at the fact that Cabot is among the five largest shale gas operators in Pennsylvania.

He has only been with the company for seven years and notes, "I still can't believe where we came from and where we are today."

In Wyoming County, major players continue to be Chesapeake and Southwestern, along with BKV which in 2017 acquired the assets of Warren Resources, which previously had acquired Carrizzo and Citrus.

On Jan. 14, BKV broke ground for a $5 million office and warehouse facility in Tunkhannock Township, just east of the Geisinger Medical Facility at the top of Mile Hill.

During the groundbreaking, company officials acknowledged they had spent more than $500 million acquiring Marcellus shale assets locally and were ready to spend another $300 million this year to buy more Marcellus assets.

Matt Johnson, vice president of corporate development for BKV, said, "We're excited to be planting our roots in the community and establish a base in the Northeast Marcellus for years to come."

Tunkhannock Mayor Norm Ball, who was at the groundbreaking, said the news had local folks excited, too, especially about the spinoff opportunities which that level of investment typically bring to a community.

Williams, the Tulsa, Okla.-based pipeline company, opened an $8 million regional headquarters north of Tunkhannock in 2014, and continues to keep an eye on its lines that carry gas from wells to market.

Although its highly publicized Atlantic Sunrise Project was completed last year, Williams continues to look for technicians who might be a good fit with the company.

She explained that new pipeline workers typically attend a 6-week boot camp before they are allowed to go out onto the field.

And, she noted that Williams also provides training and re-training classes on a regular basis.

The kinds of jobs available with Williams pretty much mirrors what the shale gas industry is looking for industry wide once a well is drilled and completed.

"Just like you'd expect with any large company, we have many different job categories with a variety of experience levels," Williams' spokesman Christopher Stockton said recently, noting his company currently employs about 700 people in Pennsylvania.

Stockton said a good example of an entry-level position in Pennsylvania is the operations technician internship whose qualifications are spelled out on the Williams website.

Susquehanna County Career and Technology Center Director Alice Davis also noted recently that there is such a high demand for water truck haulers, that her school is exploring the possibility of starting a CDL driver training program.

"The opportunities out there are virtually limitless," McKnight said. "We want our graduates and companies we serve to work together to make things happen."