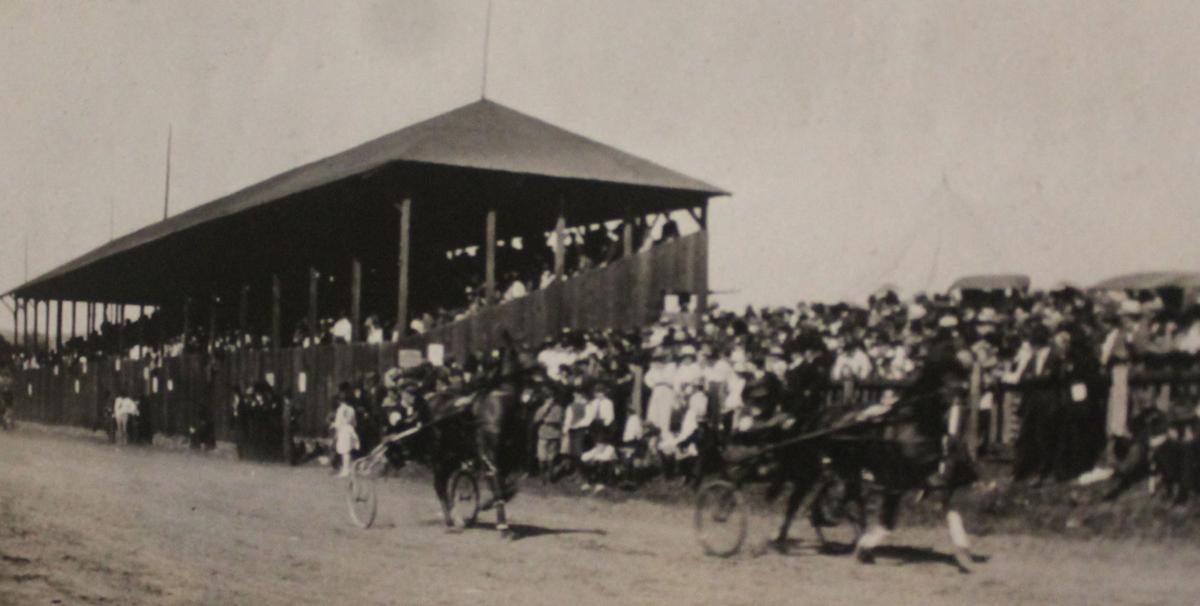 If the Spanish Flu Epidemic of 1918, was lingering around, it wasn’t evident in this image of the Wyoming County Fair in 1919 in Eaton Township, according to an image from a Smith family photo album, soon-to-be-donated to the Wyoming County Historical Society. From October 1918 to June 1919, the flu jolted everyone’s sense of normality in Wyoming County. 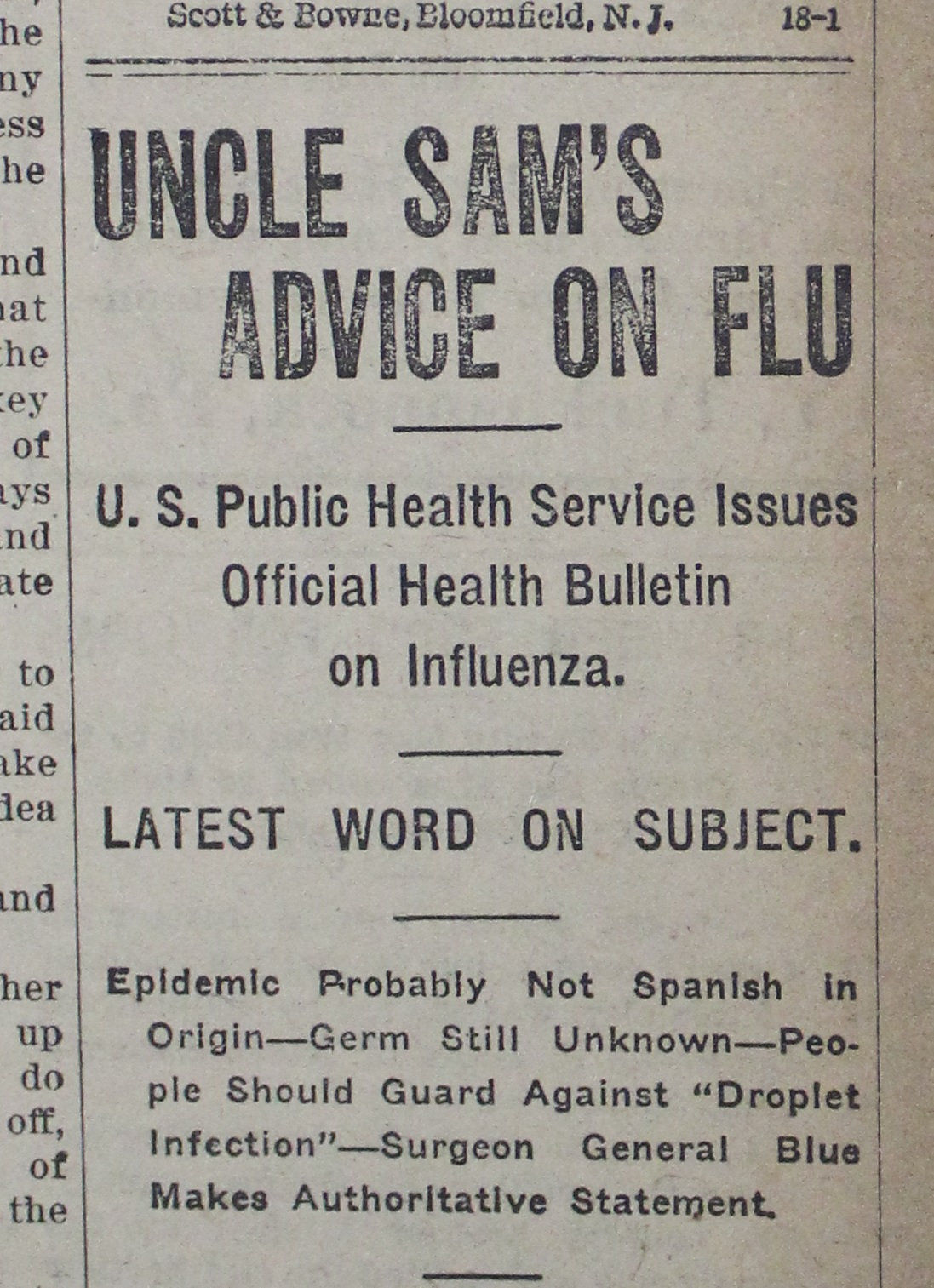 The front page of this 1918 Tunkhannock Republican and New Age shared advice on how to deal with the latest visitor. 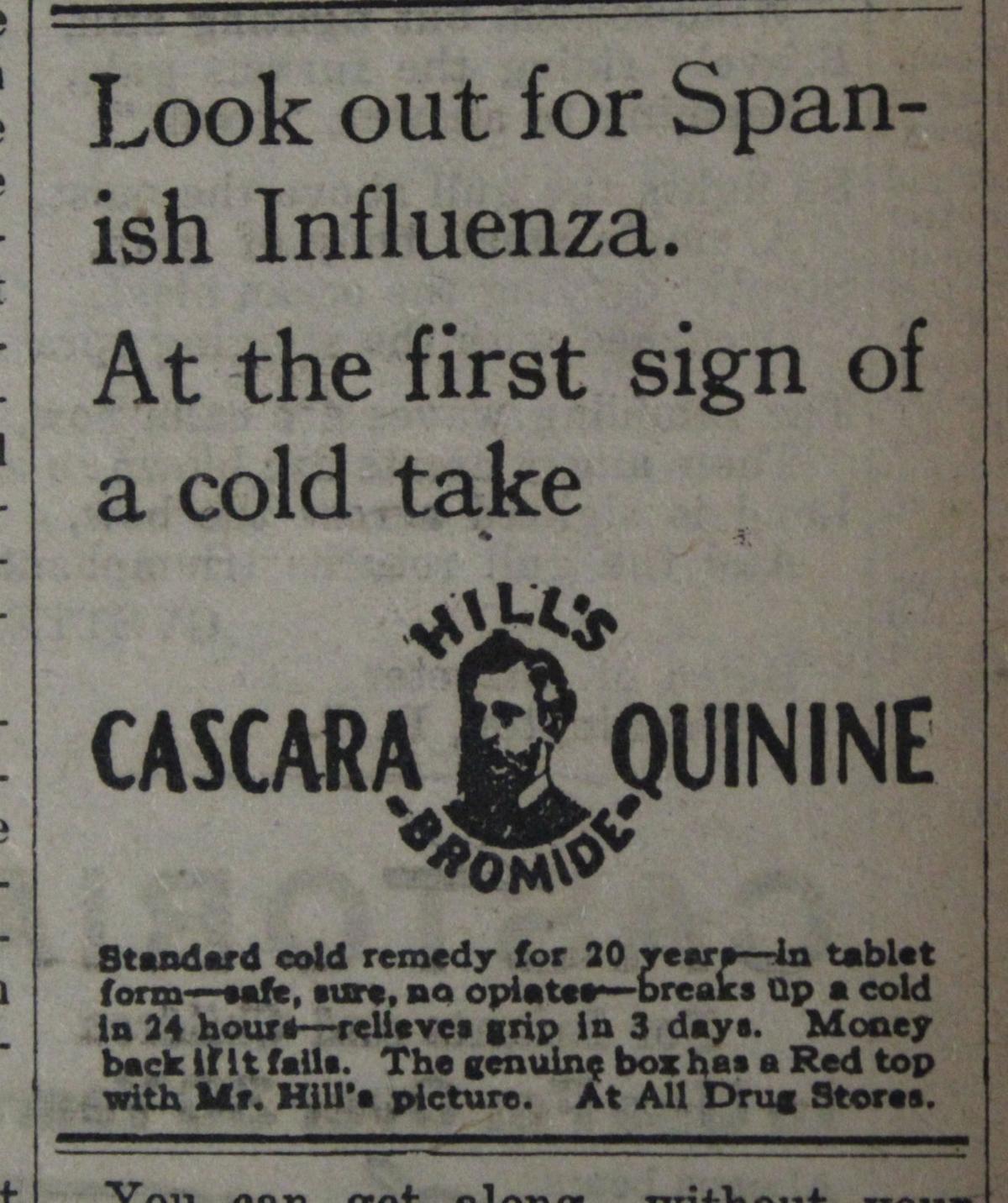 This 1918 advertisement for quinine water suggested it could keep the flu at bay.

If the Spanish Flu Epidemic of 1918, was lingering around, it wasn’t evident in this image of the Wyoming County Fair in 1919 in Eaton Township, according to an image from a Smith family photo album, soon-to-be-donated to the Wyoming County Historical Society. From October 1918 to June 1919, the flu jolted everyone’s sense of normality in Wyoming County.

The front page of this 1918 Tunkhannock Republican and New Age shared advice on how to deal with the latest visitor.

This 1918 advertisement for quinine water suggested it could keep the flu at bay.

The announcement last week that the Wyoming County Fair was not going to happen this September because of the coronavirus pandemic, led us to wonder if county fair organizers in 1918 had to make the same decision.

The quick answer is that the Wyoming County Fair scheduled that year on Sept. 17-20 — near where Walmart is today in Eaton Township — went on as planned.

In fact, it is doubtful that organizers had any inkling that a second wave of the grip was on the way.

Some historians suggest that the most likely origin of the 1918 flu pandemic was a bird or farm animal in the American Midwest. However, by June of that year the flu seemed to have mostly disappeared from North America, and was taking hold of Europe with a vengeance.

Local media said nothing about the flu, when there was any discussion about the 1918 Wyoming County Fair, and most in the Scranton, Wilkes-Barre and Tunkhannock press suggested during the week it was happening was that the biggest enemy to the fair was the rain.

However, coincidental to the Wyoming County Fair coming to an end, on Sept. 19 the Philadelphia Inquirer headlined a story, ‘Spanish Influenza Sends 600 Sailors To Hospitals.’

Most historians point to the incident written about as possibly the central point to bringing a second wave of the flu to the United States.

Clearly punctuating how quickly a virus can spread, within 10 days, on Sept. 28, there was a Liberty Loan Drive parade that drew 200,000 people to Broad Street in downtown Philadelphia to show their patriotic support for the American allies fighting a Great War in Europe.

Within days, every hospital bed in Philadelphia was occupied, and Pennsylvania Gov. Martin Brumbaugh, who was not facing reelection that fall, ordered a lock down across the state, after consulting with health officials.

A laundry list of advice came down from Dr. S.C. Hamill, the state director of Child Hygiene, that appeared in the Wyoming Democrat of Tunkhannock on Oct. 18. (See our webpage for more.)

Schools and churches were shut down in early October, and on Nov. 21, the Tunkhannock Republican and New Age shared, “The epidemic precludes opening the schools or churches yet, according to the judgment of the health board.” It added, “County Superintendent John E. Morgan has found it necessary to cancel all arrangements for the annual teachers institute which was planned for the coming week.”

In the same article, it was noted, “The school children would vote to have a flu epidemic every year.”

On Dec. 20, the Tunkhannock Republican and New Age noted there were 100 cases of influenza at the Industrial Home at White’s Ferry (St. Michael’s School) which was then supporting 350 boys.

All-in-all, Wyoming County newspapers documented at least 98 persons from the county with the Spanish Flu between October 1918 and June 1919; in addition to 68 deaths attributed to it, according to abstracted information in the Feb. 15, 2006, issue of ‘Lest We Forget: Wyoming County Pioneers,’ the newsletter of the Wyoming County Historical Society.

Oh, and back to the Wyoming County Fair of Sept. 17-20, 1918, it was hyped in the Scranton Republican two weeks out as follows: “It is expected that the fair will be the biggest and best ever held with numerous interesting and instructive exhibits and a large number of premiums will be awarded this year.”

Its main entertainment was the Boys Band of the Odd Fellows Orphanage at Sunbury, which would furnish music every day of the fair.

In truth, it was a scaled back affair, because many of the men expected to help organize as well as patronize it had already answered the call to serve overseas in the Great War.

The Tunkhannock Republican and New Age noted the fair “was fortunate in having one pleasant day for its annual exhibition last week” with between 5,000 and 6,000 passing through its gates.

It added, “The attractions were not as many as usual, owing to war conditions, but there was a good display of fruit and fancy goods.”

One highlight that a Wilkes-Barre paper noted was the auction of a full-blooded Jersey bull calf donated to the local Red Cross for the benefit of its treasury.

The county fair in 1919, according to newspaper accounts, did indeed see a return to much of the earlier fair’s luster with a full calendar of activity including horse racing.

(Editor's Note: The following article appeared in the Wyoming Democrat of Tunkhannock on Oct. 18, 1918.) INFLUENZA EPIDEMIC

Dr. S.C. Hamill, of Philadelphia, State Director of Child Hygene, has asked each County Chairman of the Child Welfare Committee make public the following procedure throughout the county regarding the present epidemic of Influenza.

1. There must be abundance of fresh air entering the homes at all times, and to protect against the lower temperatures that this will be necessitate, added clothing must be worn by the children – if necessary, coats and hats.

2. Everybody should spend as much time as possible in the open air, and in the sunlight, especially children, who can do this most of the day.

3. All crowds, especially indoor crowds should be avoided.

4. All people who cough and sneeze should be avoided.

5. If members of the household develop colds, they should be separated at once from the other members of the family and kept from them until their colds are entirely cured.

6. Every member of the family should have his own drinking cup and every member his own towel.

7. All persons, especially the children, should avoid being completely tired out from overplay or too little sleep, it reduces their resistance.

9. All persons should sleep with the windows wide open, fresh air is as important by night as by day.

10. Everyone should cover the mouth and nose when sneezing or coughing. This is most important because the germs are coughed out into the air and in that way get in the other members of the family.

11. Children with the slightest evidence of cold should not be permitted to go to school or play with others.

12. The moment anyone becomes sick or has the slightest evidence of a cold, should remembered that possibly a very serious disease is beginning and the patient must be immediately put to bed and the physician summoned as soon as possible. The doctors must be trusted. The fact that we hear chiefly of the fatal results should not discourage people. The doctors are saving many, where they are instantly summoned, and the bulk of victims get through in a few days. While it bears all the signs of influenza in its more virulent state the present epidemic is more violent than the present generations have known. The epidemic in the nineties was sweeping, but it was not as evil in its consequences. No person is immune, in spite of the best care and treatment people suffer. But if the precautions of the doctors are adhered to the well person has a better chance of escaping an attack. In the main these orders are, as in the training camps, where they have had more experience than anywhere else.

The people may also take hope in the knowledge that the scientist of the big universities and the army and navy are working unremittingly to check and cure the disease. Surgeon General Blue, of the federal public health service, is conduction experiments to determine the efficacy of vaccines. They are doing the same as the Rockefeller Institute, where are scientists unmatched.