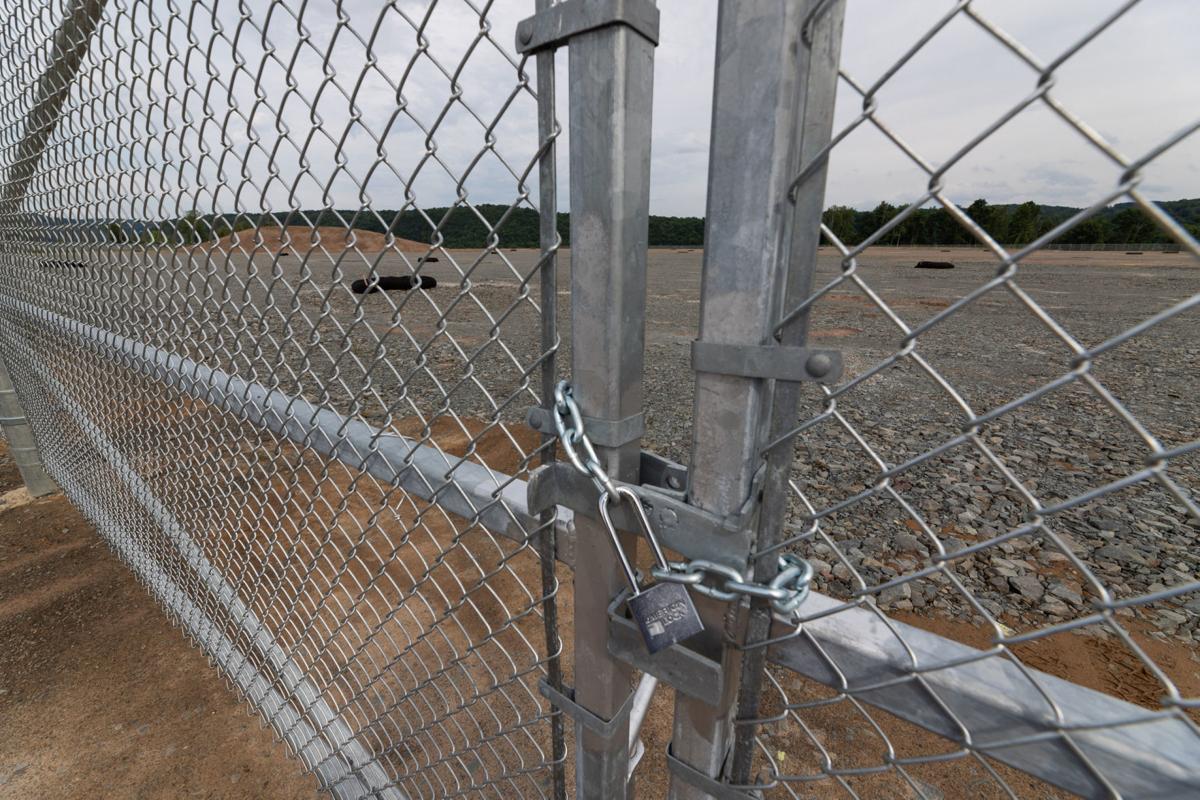 The fenced-off future site of the New Fortress Energy liquefied natural gas plant on Thursday in Wyalusing Twp. Work at the site temporarily stopped in mid-June. 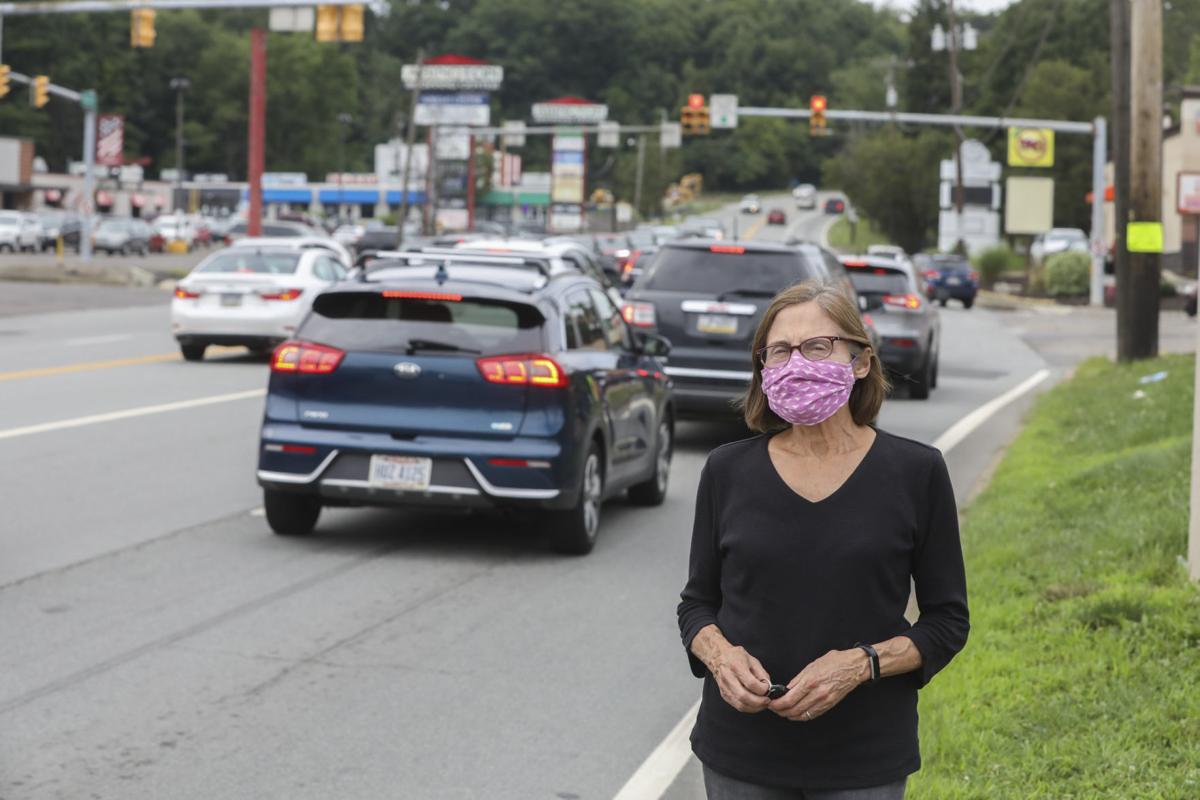 Diana Dakey, a member of Protect Northern PA, stands at Routes 6 and 11 in Clarks Summit.

The fenced-off future site of the New Fortress Energy liquefied natural gas plant on Thursday in Wyalusing Twp. Work at the site temporarily stopped in mid-June.

Diana Dakey, a member of Protect Northern PA, stands at Routes 6 and 11 in Clarks Summit.

WYALUSING TWP. — Construction at a natural gas plant that could send tanker trucks or rail cars carrying liquid methane through Tunkhannock is on hold, but concerns over how the plant could eventually ship millions of gallons of the liquefied natural gas persist.

New Fortress Energy began work on an approximately $800 million facility on Route 6 in Bradford County last year. The plant will chill methane in Marcellus Shale natural gas to minus 260 degrees Fahrenheit, the temperature at which it becomes a liquid. Taking up only 1/600th of the volume of its gaseous form, liquid methane would be shipped via rail and tanker trucks to a proposed terminal outside of Philadelphia in Greenwich Twp., New Jersey, for international distribution by boat.

New Fortress has not publicly stated what routes it will use, nor have potential routes been included in public documents.

Members of Protect Northern PA, a 20-member group formed in April in opposition of the project, believe there are only two feasible routes for tanker trucks, both of which snake through populated areas, said group facilitator Diana Dakey of Glenburn Twp.

However, construction of the plant is suspended until at least next year. New Fortress Energy told investors in May there is no guarantee the plant will be completed, so it is unclear if, or when, Protect Northern PA’s concerns will be warranted.

To transport LNG by rail, New Fortress would likely send train cars through about a dozen counties, Dakey said, including Wyoming, Luzerne and Lackawanna, en route to New Jersey.

Delaware River Partners, a subsidiary of New Fortress’ parent company Fortress Investment Group, would operate the terminal. The project is under review by the Delaware River Basin Commission, which includes the governors of Pennsylvania, Delaware, New Jersey and New York. The commission initially approved plans in June 2019 before opting to hold a hearing based on public feedback, according to a July 21 report from Pennsylvania Department of State hearing officer John D. Kelly.

Following a multiple-day hearing in May, Kelly recommended the committee allows the terminal.

New Fortress also operates two terminals in Jamaica that convert LNG back into a gas and a liquefaction plant in Miami. The gas company expected to have a facility completed in San Juan, Puerto Rico, by the end of June, according to a May 5 quarterly report submitted to the U.S. Securities and Exchange Commission. New Fortress is also developing a terminal to convert LNG back to gas in Mexico.

Shipping by the numbers

With plans to produce up to 3.6 millions of gallons of LNG each day, New Fortress Energy will require a large volume of specialized train cars or tanker trucks.

The facility would have 18 LNG loading bays to fill 10,000-gallon tanker trucks with liquid methane, according to a December 2018 plant approval application filed with the state Department of Environmental Protection.

New Fortress officials told the Greater Wyalusing Chamber of Commerce they intend to primarily transport LNG by rail, said Kelly White, the chamber’s executive director. Township residents had raised concerns about the potential for constant traffic and how it would affect them, she said.

Energy Transport Solutions, a subsidiary of New Fortress Energy, received approval in December from the U.S. Department of Transportation’s Pipeline and Hazardous Materials Safety Administration to transport LNG using trains with up to 100 specialized cars from Wyalusing Twp. to Gibbstown, Greenwich Twp., New Jersey, with no intermediate stops, according to the PHMSA.

Had Energy Transport Solutions not received approval, it would have primarily transported LNG via tanker trucks, according to a PHMSA environmental assessment. Using tanker trucks to ship LNG is permitted under the federal Department of Transportation’s Hazardous Materials Regulations. Trains are both more fuel efficient and will lead to less wear and tear on roadways, the assessment says.

LNG hazardsIn its assessment, PHMSA concluded that transporting LNG via roadways carries the same inherent risks as railways, but there is a higher likelihood of an accident because of the larger number of trucks needed compared to train cars.

The DOT-113 tank cars New Fortress received approval for can carry nearly 30,700 gallons of LNG — three times more than a single tanker truck. But, because train cars carry significantly more LNG and are transported together along railways, an incident “could lead to higher consequences,” according to the environmental assessment.

Failures for either mode of transportation “could cause injury, death, property destruction and environmental harm,” the assessment says.

Direct contact with the extremely cold liquid can cause burns, and LNG can pose both fire and explosion hazards, according to PHMSA. When LNG is exposed to the air, it boils and turns back into a gas. Evaporated LNG can be flammable when mixed with air, but only in certain concentrations, according to the assessment. The risk of a tank car failing and igniting is low, but exposure to heat from a burning pool of LNG or LNG vapors igniting could result in death, serious injuries and property damage.

As a vapor, methane is heavier than air, forming a visible, cold cloud that will travel along the ground until it’s close to the ambient air temperature; it can cause someone to asphyxiate if it replaces oxygen in a confined space, the PHMSA said.

In a letter opposing the proposed shipping terminal in New Jersey, the Delaware Riverkeeper Network, a nonprofit that aims to protect the Delaware River and its tributaries, raised concerns over the possibility of a “boiling liquid evaporating vapor explosion” or BLEVE. A BLEVE occurs when the LNG turns into a gas inside a container, taking up more room than its liquid form and stressing the container, according to the letter.

The Riverkeeper Network contends that if a train car were exposed to high heat, its pressure valve could fail to keep up with the increasing pressure. The metal will weaken and crack and the LNG will be released in an explosion. The ensuing vapor cloud could ignite into a fast-burning, hot, wide fireball, according to the network.

The PHSMA called explosions highly unlikely, explaining it is not possible to say with certainty if a BLEVE could occur during an LNG car derailment, or what conditions would need to exist for it to occur.

New Fortress did not provide a timetable for work, but the company previously told the county construction would take between 2 to 2 ½ years, he said.

In a quarterly report filed in May with the U.S. Securities and Exchange Commission, New Fortress noted an increasingly volatile LNG industry. If market disruptions and industry bankruptcies impact the company’s ability to purchase LNG or raise operating costs, New Fortress noted the affect it could have on the Wyalusing Twp. plant.

“There can be no assurances that we will complete the Pennsylvania Facility or be able to supply our facilities with LNG produced at our own facilities,” according to the quarterly report. “Even if we do complete the Pennsylvania facility, there can be no assurance that it will operate as we expect or that we will succeed in our goal of reducing the risk to our operations of future LNG price variations.”

New Fortress Energy has invested substantially in site work, preparation, land development and restoration over the past year, the organization said in a statement Thursday. The gas company halted work onsite in mid-June, according to the statement. Work will remain on hold while additional development planning and coordination with subcontractors continues, the company said.

“Our team will continue to update the community and work with local stakeholders as the development process advances,” according to the statement.

Dakey emphasized that the project is still currently paused, not canceled.

“Because the project is on hold, it does not mean the project has been abandoned,” she said. “We’re concerned that should this project get up and running, it will be harmful to a wide area of communities in several counties in Northeast Pennsylvania due to the hazardous movement of LNG by tanker truck or by rail.”

What is liquefied natural gas?

Liquefied natural gas is natural gas that has been chilled to minus 260 degrees Fahrenheit for transportation and storage, according to the U.S. Energy Information Administration.

LNG is odorless, colorless, non-corrosive and non-toxic, according to the U.S. Department of Transportation’s Pipeline and Hazardous Materials Safety Administration. As a liquid, it takes up 1/600th of the space of its gaseous form, allowing it to be more readily and economically transported, according to the PHMSA.

While natural gas is a domestic commodity for the United States, LNG has an international market, according to the PHMSA. LNG can supply regions that lack natural gas sources or the infrastructure to receive natural gas via pipeline, the PHMSA said.

After natural gas is liquefied, companies transport the liquid to specialized ships where the liquid is stored in cryogenic tanks, according to the EIA. When it arrives at its destination, LNG is converted back to a gas in a process known as regasification. It’s then transported by pipeline to power plants, industrial facilities, residential and commercial customers, according to the EIA.

New Fortress Energy’s liquefied natural gas plant in Wyalusing Twp. could ship up to 3.6 million gallons of LNG through Pennsylvania each day, but the permitting process that green-lit the plant failed to consider how the project could affect communities beyond Wyalusing Twp., Protect Northern PA members contend.

“A lot of other communities other than the one that’s going to have the gas-processing plant are going to have a huge increase in all of this gas activity, and so that is something that we, Protect Northern PA, want to make people aware of,” group facilitator Diana Dakey said.

LNG will be shipped through 12 Pennsylvania counties, including highly populated areas, but only the host community, Wyalusing Twp., is consulted, Dakey said.

She also noted other impacts stemming from the plant’s approval, including the need for more feeder pipeline, compressor stations and additional fracking.

“All of these things are part of the project, which has to use large amounts of Marcellus gas,” she said.