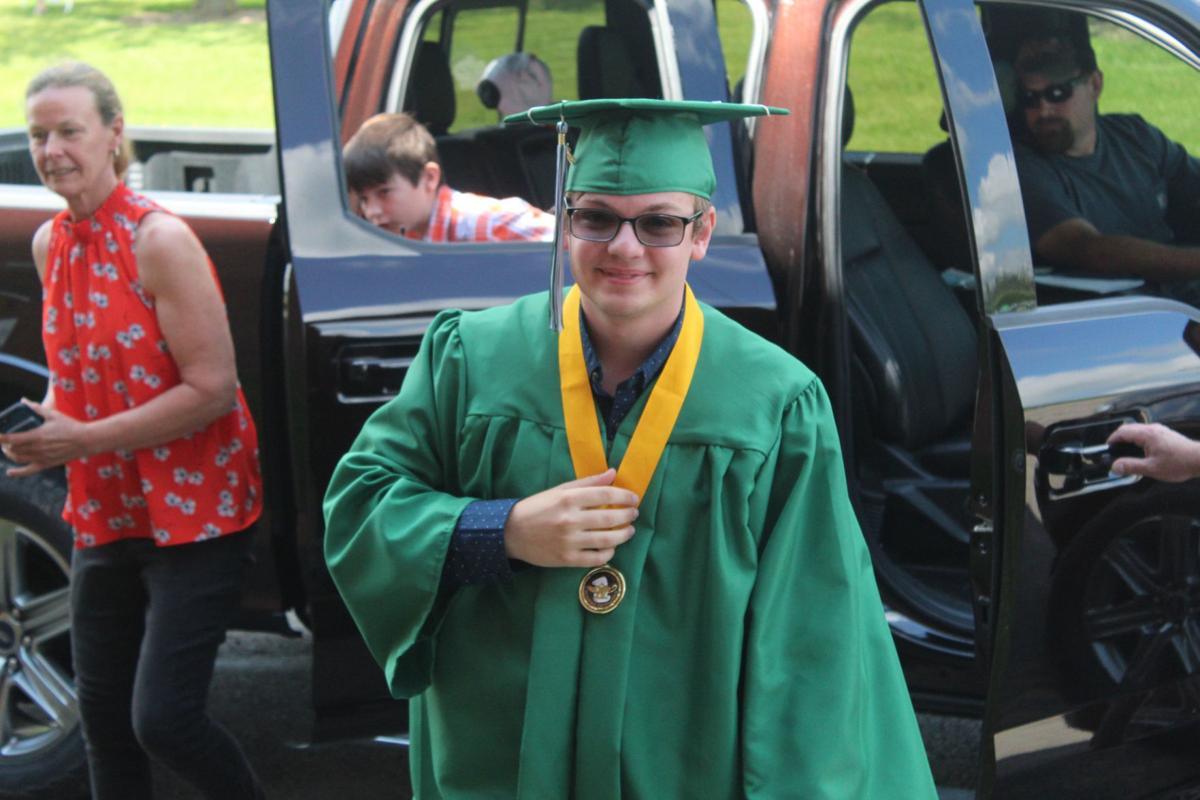 For Saturday’s unique drive-by graduation Cale Southworth is dropped off at one end of the gym, and leaves a few minutes later at another gym doorway. 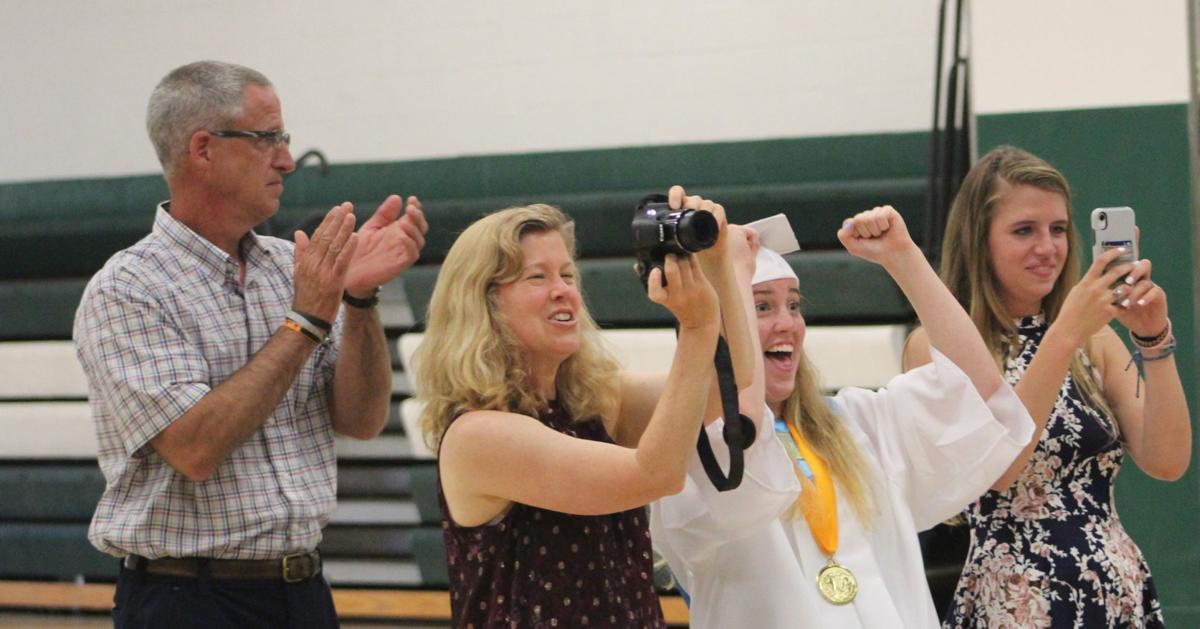 Dad, mom, twin sister Sadie, and Eliza Bosscher, give a shout out for Megan Bosscher as she gets her diploma on stage Saturday. 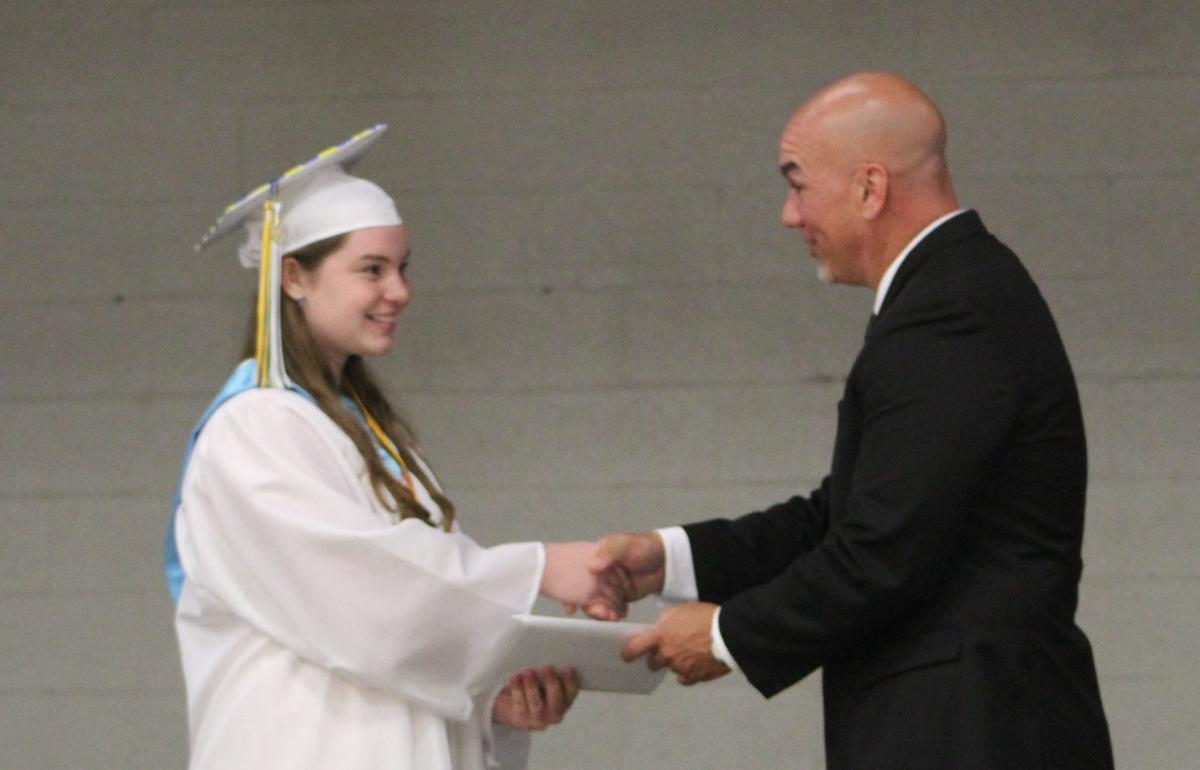 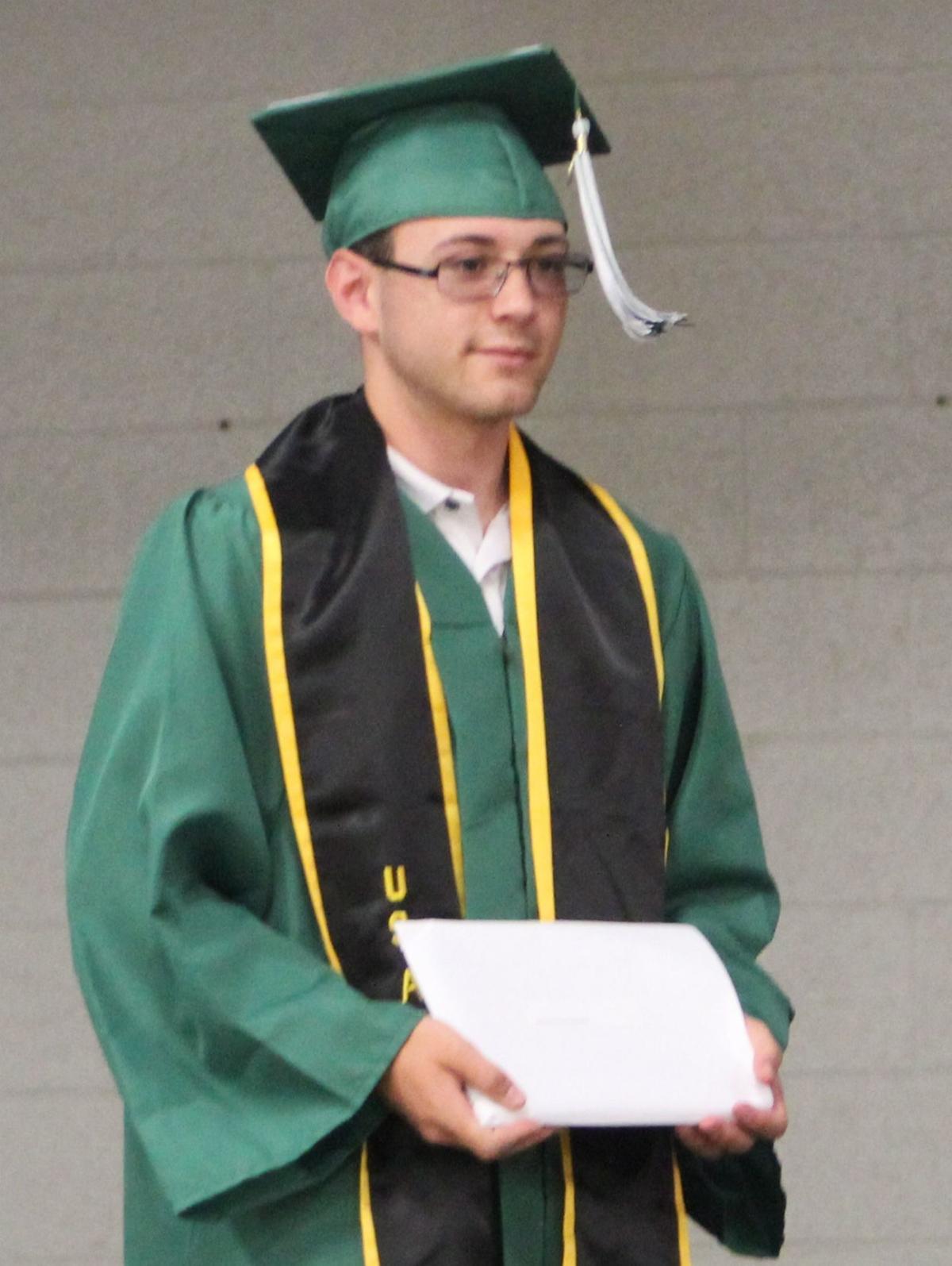 Anthony Carpenter of Meshoppen will soon be joining the U.S. Air Force 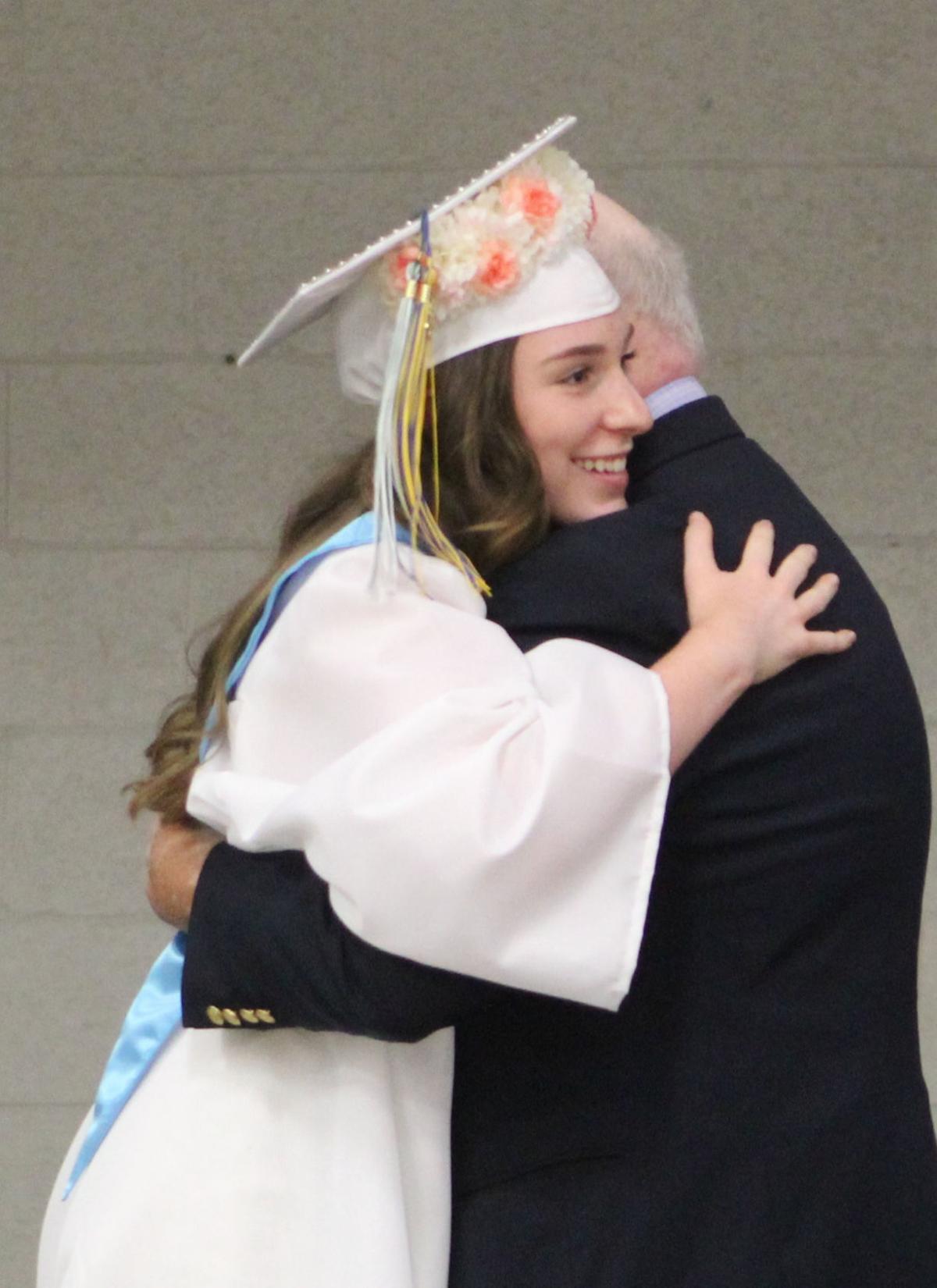 Megan Tewksbury gets a hug from her grandpa, Arden Tewksbury, who serves as Elk Lake School Board Chairman. 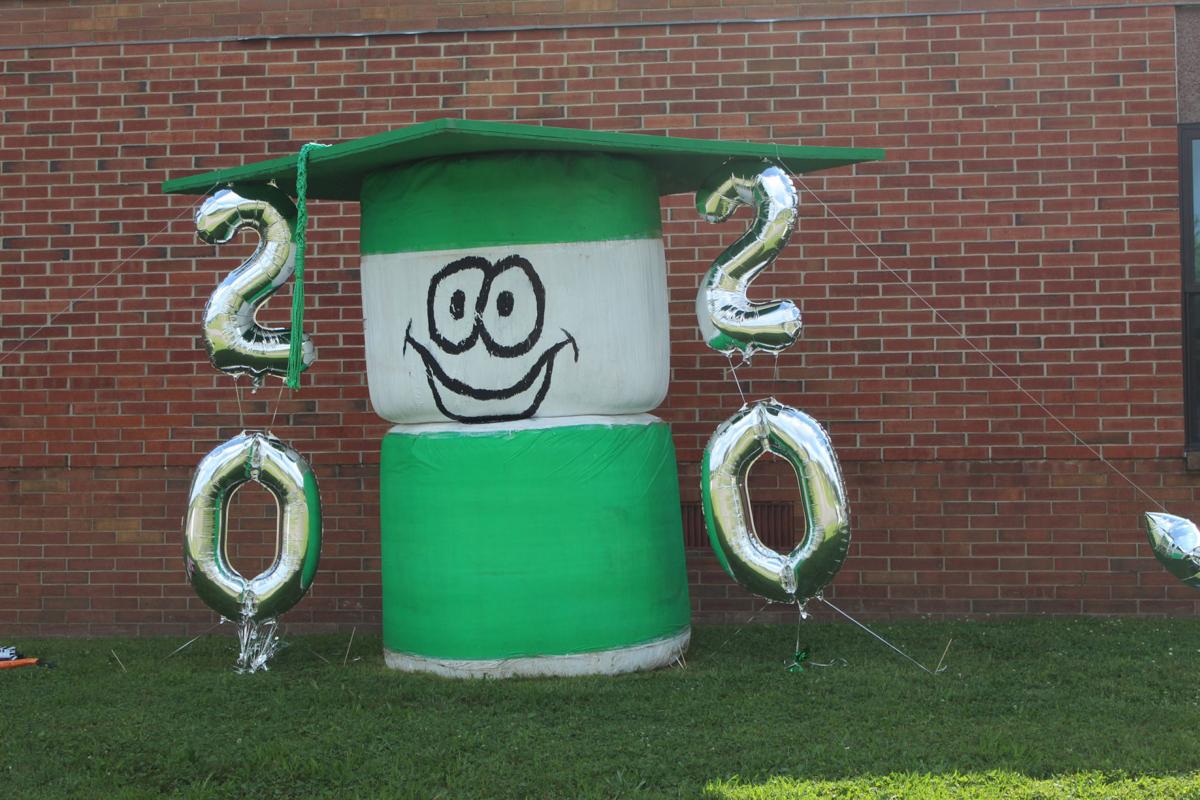 A couple bales of hay form a 2020 class ornament. 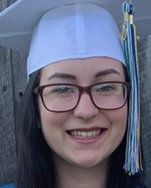 For Saturday’s unique drive-by graduation Cale Southworth is dropped off at one end of the gym, and leaves a few minutes later at another gym doorway.

Dad, mom, twin sister Sadie, and Eliza Bosscher, give a shout out for Megan Bosscher as she gets her diploma on stage Saturday.

Anthony Carpenter of Meshoppen will soon be joining the U.S. Air Force

Megan Tewksbury gets a hug from her grandpa, Arden Tewksbury, who serves as Elk Lake School Board Chairman.

A couple bales of hay form a 2020 class ornament.

Saturday morning had all the trappings of a typical Elk Lake graduation: well-wishers, speeches, diplomas and grads to the stage.

But it was painfully obvious to anyone attending that what was happening in the gymnasium and elsewhere was a gallant attempt to bring closure to a school year that was having trouble reaching an end.

The cornerstone to the day, of course, was having each grad come to the stage, have their name called by Superintendent Ken Cuomo, receive his or her diploma from Principal John Warnero, move their tassel, smile to the camera, and walk off stage left — with their family joining them — to re-enter real life.

Outside, others had assembled to cheer on those arriving at the front entrance to the gym, and cheering them once more as they left.

Cuomo noted a few humorous moments when about 10 graduates on the day took the instruction to move their tassel only to discover they had removed their tassel.

“Let’s do that again,” he smiled, as a cameraman was taping the whole thing. “We want to get it right for the final version” (that was later being made available to all students).

“Ah, the miracle of modern videography,” he chuckled.

Faculty member Thom Kotch who was asked by the class to be its guest speaker was in attendance, but he was mostly shooting pictures of students as they came in individually with their families.

The speeches themselves had been pre-recorded.

Class president Kathryn Cusatis acknowledged, “We will most likely always hold the record for the longest skip day ever.”

“But I felt robbed,” she said. “I love my school, my teachers and most of all my friends... we all lost the chance to make some of those senior memories that we will never have the opportunity to create.”

She acknowledged moving to the school district the summer before seventh grade, having grown up in the city, “not accustomed to country living... I went from not having a yard to living on a small farm with no cell service.”

But that was nothing compared to what was faced this year.

In a word, she called her class “resilient.”

“We are strong. We are driven. We are fearless,” she said. “We must throw away our preconceived notions of what the world is, and make it what we want it to be.”

She acknowledged that a portion of money not used on a prom or senior trip by the class would be instead used to help future students in need to be able to participate in field trips and also receive school supplies. “We hope that these donations will help inspire future generations.”

Acknowledging the end of the school year was “not what anyone expected,” Stevens said, “It is so hard to give up control and allow life to take place in front of your eyes.”

“Life is not going to follow the map you have in your head of when you reach your goals or how exactly you will attain those goals,” she said, but noted “The worst thing to do in life is to watch it slide by.”

Her final challenge, “Welcome uncertainty, embrace the unknown, and hold onto the goals you want to achieve.”

Valedictorian Sadie Bosscher, embraced how the old adage “’It’s as much about the journey as it is the destination’ has never been more true.”

“Classmates, do not dwell on the things we didn’t get. Be thankful and celebrate the things we did. We may not have had a senior prom, but we did get to spend time with family before we embark on our next journey.”

She, too, embraced resilience and how “These last three months have caused our families, our school, our community, state, and our nation to come together like never before.”

Bosscher thanked her classmates, teachers, family and friends “for being a part of my journey and thank you for all you have taught me.”

She noted, “Our class has set a precedent of resilience and grit for the upcoming grades to follow.”

Bosscher said she hoped her classmates would embrace the words of Admiral William McRaven who in 2014 at a graduation ceremony in Texas, said, “You all will have an opportunity to inspire someone around you. Never miss that opportunity.”

In Kotch’s keynote address, the AP physics teacher thanked the administration’s efforts “for seeing us through this Apollo 13 of a fourth marking period,” remembering the 1970 NASA space mission headed for the moon that had to be scuttled after a service module failed two days into the mission and its flight crew had to be guided safely back home to earth.

“It’s been a crazy ride since March 13,” he said, thinking he’d see his students in a week or two, “but that turned into the nightmare that has been the last 100-plus days.”

However, all was not bleak, he said, acknowledging that “Very few of us succumbed to the virus and we’re doing okay.” He gave a shout out to inspiring selfless acts of kindness all around them which the students should not forget.

He also acknowledged the worst side of humanity, when on March 13 at the Tunkhannock Wal-Mart, “People pushing, grabbing and hoarding,” and then on May 25 from Minneapolis seeing the senseless murder of George Floyd, that sparked protests for racial equality all around the globe.

“Real life deals us with a very different hand of cards,” he said. “We have to recognize that people need to feel ‘mattered.’”

“At the end of the day, we all want the same things... safety, love, self-esteem, a good meal and time with those who matter most to us,” he added. “It is up to you to do better than my generation.”