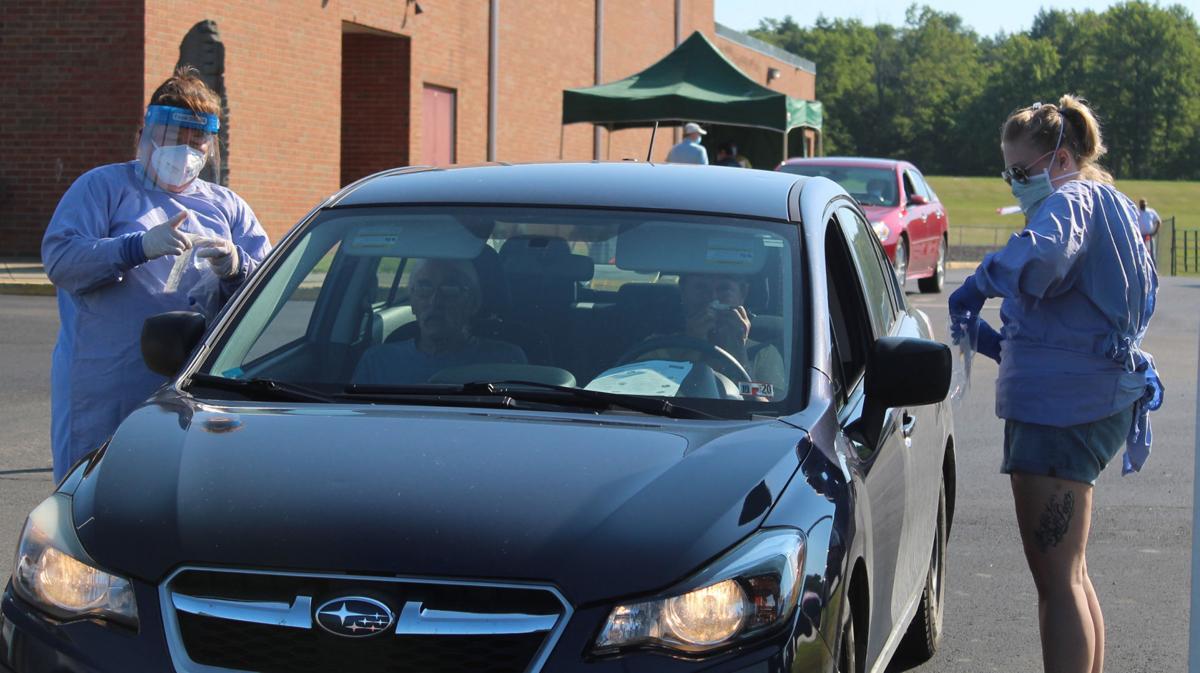 NEPA Community Health Care was set up for mass COVID-19 testing Saturday in the Montrose Area High School campus parking lot so individuals within a 50-mile radius could put their minds at rest as to whether they might be a carrier.

NEPA Community Health Care was set up for mass COVID-19 testing Saturday in the Montrose Area High School campus parking lot so individuals within a 50-mile radius could put their minds at rest as to whether they might be a carrier.

With an uptick of local COVID-19 cases and new restrictions imposed at the state level, Wyoming County officials reminded the public that the pandemic hasn’t ended yet.

As of July 21 at noon, Wyoming County has 49 confirmed and three probable cases of COVID-19. Between July 8 and 13, and July 16 through 18, the county added at least one new case per day. COVID-19 deaths have been steady at seven since May.

Wyoming County entered the least restrictive green phase of Pennsylvania’s reopening plan on June 12, for which Dziak partially attributes an increase in cases. He said being in the green phase led to people becoming lax with wearing face masks and social distancing.

Dziak also mentioned people traveling out of the area for summer vacations as a possible contributing factor.

“People need to understand that even though we went green, you need to be careful,” he said. “You need to be using masks, social distancing. We’ve got to take it seriously. It’s not going away.”

Acknowledging rumors of the Tunkhannock Walmart having an employee test positive, Dziak said he hasn’t heard anything official from the Pennsylvania Department of Health.

Wyoming County Commissioner Rick Wilbur also finds the increase in cases concerning. He agreed with Dziak that county residents have been letting their guard down.

Wilbur said he’s thankful the commissioners decided to wait on reopening the courthouse, which has been accessible by appointment only since June 8. The idea behind waiting was to see if county cases increased following the Fourth of July holiday.

During a press conference last week, Gov. Tom Wolf announced that on-premises alcohol consumption can only occur with meals, shutting down nightclubs and bars which don’t serve food.

Also, he said telework should be implemented whenever possible, and indoor gatherings of more than 25 people are prohibited. Outdoor gatherings must still cap at 250.

“I really think that if we did what we should be doing, maybe he wouldn’t be taking the drastic steps he’s taking,” Wilbur said. “I don’t necessarily agree, but I think until people realize this isn’t over, we’re not going to get out of it.”

Wolf was asked why he’s imposing a statewide order after previously discussing a targeted approach to counties seeing an increase in cases. He noted that the virus “isn’t respecting boundaries.”

“We are trying to do what we need to do in a targeted fashion. As for the geographic spread, most of the counties in Pennsylvania actually are seeing an increase,” Wolf said. “Not to the extent of Allegheny County or Philadelphia County, but this is something that extends across the Commonwealth.”