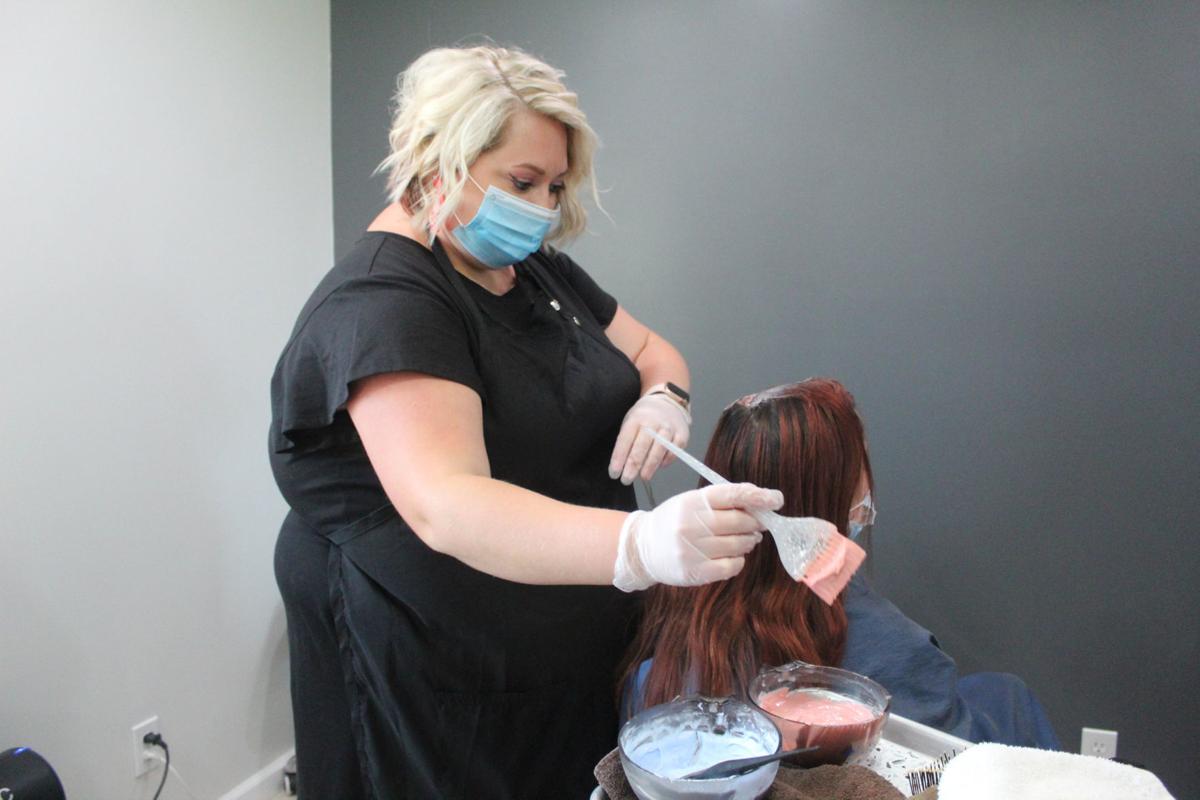 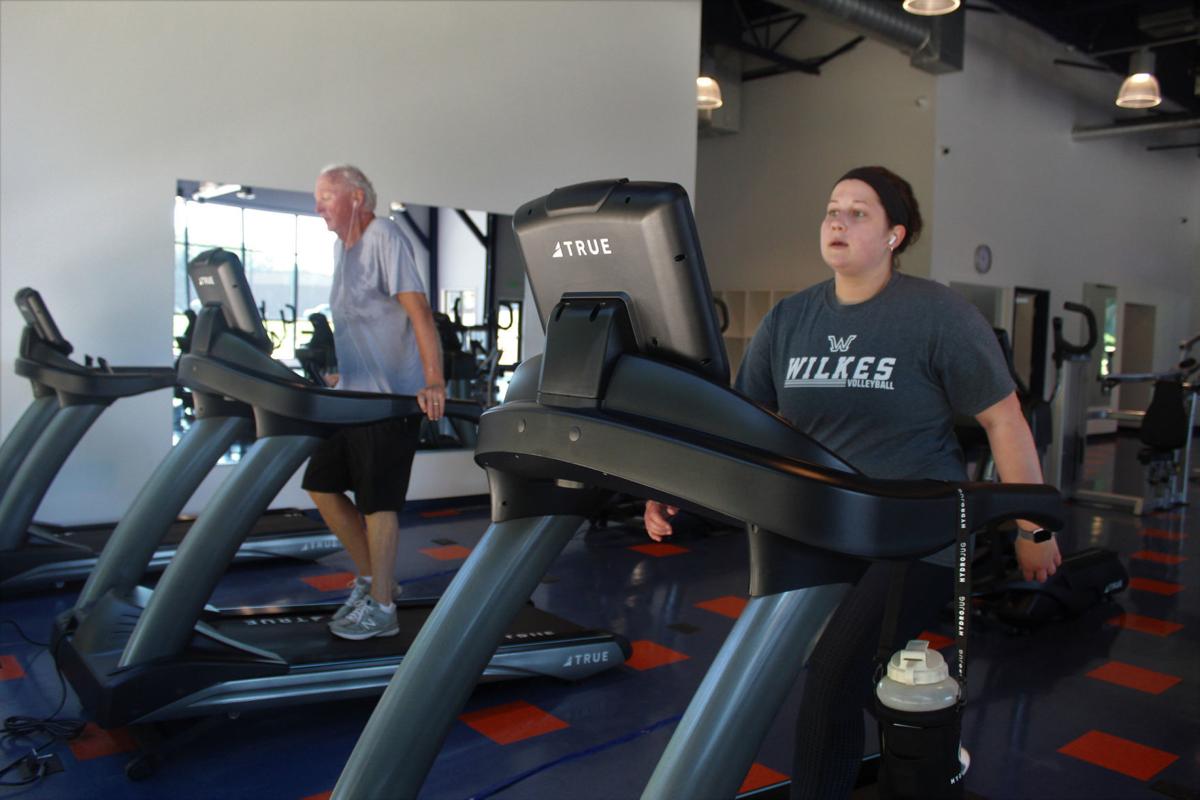 Keystone Fitness in Factoryville saw members return to work out on Friday. From right are Marissa Lewis and Jack Foley. 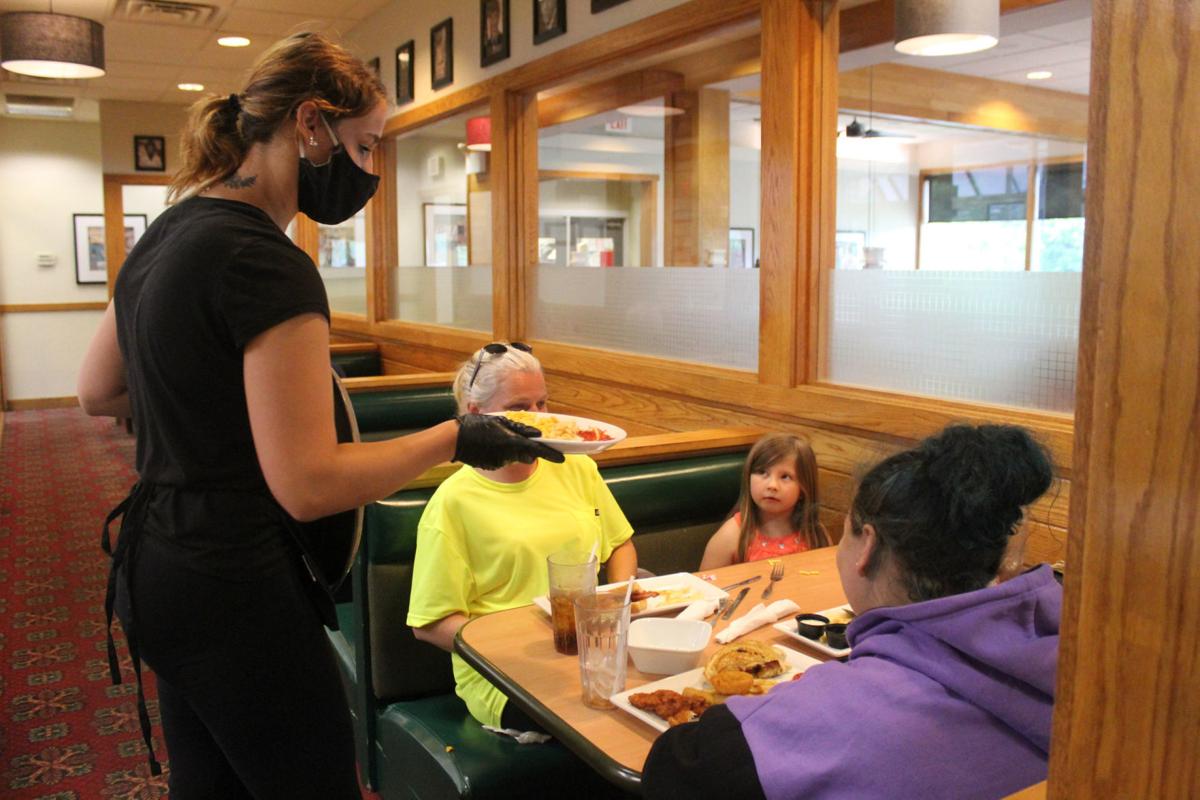 Samantha Stephens begins to clear plates from a group dining in at Perkins in Tunkhannock.

Keystone Fitness in Factoryville saw members return to work out on Friday. From right are Marissa Lewis and Jack Foley.

Samantha Stephens begins to clear plates from a group dining in at Perkins in Tunkhannock.

Lynn Closterman put on hand sanitizer and had her temperature checked on Friday before she could even step through the front door of Head to Toe Salon & Spa in Tunkhannock.

The salon reopened on Friday as Wyoming County entered the least restrictive phase of Gov. Tom Wolf’s plan to reopen Pennsylvania in the COVID-19 pandemic.

Under the green phase, personal care services such as hair salons could reopen at half capacity by appointment only.

“I was scared and excited,” Mandziara said. “Happy to see everybody, but sad that masks and social distancing is our kind of new normal when we’re such a family-oriented, ‘huggy’ salon.”

As she started mixing hair dye for Closterman, Nicole Stonier was busy at the front desk fielding calls from clients wanting to book appointments for haircuts, manicures, massages and more.

“We are booked solid,” Stonier said.

Some other precautions taken at Head to Toe include requiring face masks, facilitating social distancing and having employees change smocks in between clients.

Closterman, of Lake Ariel, was heartbroken for the staff of 17 people at Head to Toe when Gov. Wolf placed restrictions on non-essential businesses in mid-March. She’s a regular at the salon and travels nearly an hour to get there.

“I could go without my hair getting done, but the loss of income was my main concern (for Head to Toe),” she said.

The green phase also allows gyms to reopen at half capacity, so Keystone Fitness in Factoryville welcomed back members on Friday. The fitness center opened on the Keystone College campus late last year.

“We were open for about three or four months and we’ve been closed now for three months,” said manager Jason Gay, who believes the closure was unfortunate, but for the best.

Members sanitized their hands upon entry and cleaned equipment in between uses with disposable wipes instead of towels. The staff distanced equipment ahead of the opening and has been ramping up sanitation efforts throughout the day.

Limited hours continued into the weekend for a trial period to see if any adjustments were needed before reopening for regular hours on Monday.

Alayna Murphy of Factoryville was one of several people who came to work out on Friday.

“I was excited and happy to get out of the house,” she said.

Meanwhile county restaurants and bars, which have been limited to takeout and delivery since mid-March, brought back indoor seating on Friday. This included Perkins Restaurant & Bakery in Tunkhannock.

“It was like a holiday when we heard Perkins was open,” said customer Anne Spencer.

Perkins was originally open for takeout only, but with decreased traffic in the area, it wasn’t beneficial to continue, according to general manager Charles Franklin.

“I’m currently calling more staff in so we could handle the influx of people,” he said. “We weren’t sure what to expect with only 50% seating and the limitations.”

Servers wore masks and gloves and sanitized seating areas in between guests. Among other precautions, the staff hasn’t been keeping condiments on the tables.

The restaurant has a temporary limited menu, and the ice cream counter has reopened as well.

Wyoming County residents can expect other businesses to come back in the near future.

The Dietrich Theater in Tunkhannock lights up its screens again this Friday, June 19.

“We are elated,” said Dietrich Theater Executive Director Erica Rogler. “We can’t wait to get back to doing what we love to do.”

This weekend, the theater is offering “Trolls World Tour” and “I Still Believe” along with “Back to the Future” with staggered showtimes. Customers can only remove their masks while they’re seated, and groups of more than six aren’t permitted.

The Dietrich staff has been making arrangements to bring back classes and other programs, though they’re going to look different under COVID-19 guidelines.

“We’re so grateful for everyone’s response and can’t wait to see them all when they come back to the Dietrich,” Rogler said.