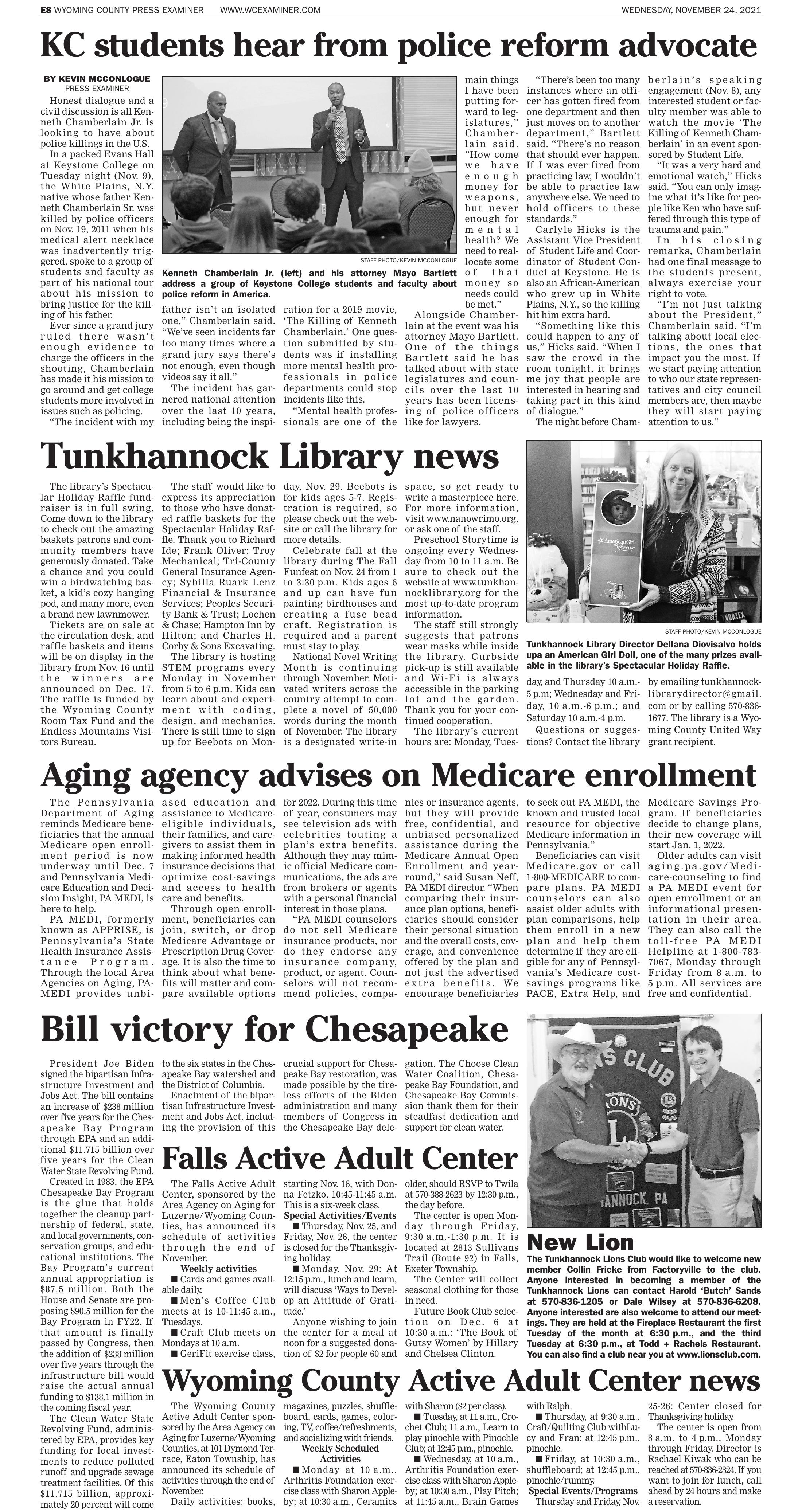 Kenneth Chamberlain Jr. (left) and his attorney Mayo Bartlett address a group of Keystone College students and faculty about police reform in America.

Kenneth Chamberlain Jr. speaks to a group of Keystone College students about how they could be advocates for policing reform.

Honest dialogue and a civil discussion is all Kenneth Chamberlain Jr. is looking to have about police killings in the U.S.

In a packed Evans Hall at Keystone College on Tuesday night (Nov. 9), the White Plains, N.Y. native whose father Kenneth Chamberlain Sr. was killed by police officers on Nov. 19, 2011 when his medical alert necklace was inadvertently triggered, spoke to a group of students and faculty as part of his national tour about his mission to bring justice for the killing of his father.

Ever since a grand jury ruled there wasn’t enough evidence to charge the officers in the shooting, Chamberlain has made it his mission to go around and get college students more involved in issues such as policing.

“The incident with my father isn’t an isolated one,” Chamberlain said. “We’ve seen incidents far too many times where a grand jury says there’s not enough, even though videos say it all.”

The incident has garnered national attention over the last 10 years, including being the inspiration for a 2019 movie, ‘The Killing of Kenneth Chamberlain.’ One question submitted by students was if installing more mental health professionals in police departments could stop incidents like this.

“Mental health professionals are one of the main things I have been putting forward to legislatures,” Chamberlain said. “How come we have enough money for weapons, but never enough for mental health? We need to reallocate some of that money so needs could be met.”

Alongside Chamberlain at the event was his attorney Mayo Bartlett. One of the things Bartlett said he has talked about with state legislatures and councils over the last 10 years has been licensing of police officers like for lawyers.

“There’s been too many instances where an officer has gotten fired from one department and then just moves on to another department,” Bartlett said. “There’s no reason that should ever happen. If I was ever fired from practicing law, I wouldn’t be able to practice law anywhere else. We need to hold officers to these standards.”

Carlyle Hicks is the Assistant Vice President of Student Life and Coordinator of Student Conduct at Keystone. He is also an African-American who grew up in White Plains, N.Y., so the killing hit him extra hard.

“Something like this could happen to any of us,” Hicks said. “When I saw the crowd in the room tonight, it brings me joy that people are interested in hearing and taking part in this kind of dialogue.”

The night before Chamberlain’s speaking engagement (Nov. 8), any interested student or faculty member was able to watch the movie ‘The Killing of Kenneth Chamberlain’ in an event sponsored by Student Life.

“It was a very hard and emotional watch,” Hicks said. “You can only imagine what it’s like for people like Ken who have suffered through this type of trauma and pain.”

In his closing remarks, Chamberlain had one final message to the students present, always exercise your right to vote.

Tunkhannock Library Director Dellana Diovisalvo holds upa an American Girl Doll, one of the many prizes available in the library’s Spectacular Holiday Raffle.

The library’s Spectacular Holiday Raffle fundraiser is in full swing. Come down to the library to check out the amazing baskets patrons and community members have generously donated. Take a chance and you could win a birdwatching basket, a kid’s cozy hanging pod, and many more, even a brand new lawnmower.

Tickets are on sale at the circulation desk, and raffle baskets and items will be on display in the library from Nov. 16 until the winners are announced on Dec. 17. The raffle is funded by the Wyoming County Room Tax Fund and the Endless Mountains Visitors Bureau.

The library is hosting STEM programs every Monday in November from 5 to 6 p.m. Kids can learn about and experiment with coding, design, and mechanics. There is still time to sign up for Beebots on Monday, Nov. 29. Beebots is for kids ages 5-7. Registration is required, so please check out the website or call the library for more details.

Celebrate fall at the library during The Fall Funfest on Nov. 24 from 1 to 3:30 p.m. Kids ages 6 and up can have fun painting birdhouses and creating a fuse bead craft. Registration is required and a parent must stay to play.

National Novel Writing Month is continuing through November. Motivated writers across the country attempt to complete a novel of 50,000 words during the month of November. The library is a designated write-in space, so get ready to write a masterpiece here. For more information, visit www.nanowrimo.org, or ask one of the staff.

Preschool Storytime is ongoing every Wednesday from 10 to 11 a.m. Be sure to check out the website at www.tunkhannocklibrary.org for the most up-to-date program information.

The staff still strongly suggests that patrons wear masks while inside the library. Curbside pick-up is still available and Wi-Fi is always accessible in the parking lot and the garden. Thank you for your continued cooperation.

Questions or suggestions? Contact the library by emailing tunkhannocklibrarydirector@gmail.com or by calling 570-836-1677. The library is a Wyoming County United Way grant recipient.

The Pennsylvania Department of Aging reminds Medicare beneficiaries that the annual Medicare open enrollment period is now underway until Dec. 7 and Pennsylvania Medicare Education and Decision Insight, PA MEDI, is here to help.

PA MEDI, formerly known as APPRISE, is Pennsylvania’s State Health Insurance Assistance Program. Through the local Area Agencies on Aging, PA-MEDI provides unbiased education and assistance to Medicare-eligible individuals, their families, and caregivers to assist them in making informed health insurance decisions that optimize cost-savings and access to health care and benefits.

Through open enrollment, beneficiaries can join, switch, or drop Medicare Advantage or Prescription Drug Coverage. It is also the time to think about what benefits will matter and compare available options for 2022. During this time of year, consumers may see television ads with celebrities touting a plan’s extra benefits. Although they may mimic official Medicare communications, the ads are from brokers or agents with a personal financial interest in those plans.

“PA MEDI counselors do not sell Medicare insurance products, nor do they endorse any insurance company, product, or agent. Counselors will not recommend policies, companies or insurance agents, but they will provide free, confidential, and unbiased personalized assistance during the Medicare Annual Open Enrollment and year-round,” said Susan Neff, PA MEDI director. “When comparing their insurance plan options, beneficiaries should consider their personal situation and the overall costs, coverage, and convenience offered by the plan and not just the advertised extra benefits. We encourage beneficiaries to seek out PA MEDI, the known and trusted local resource for objective Medicare information in Pennsylvania.”

Beneficiaries can visit Medicare.gov or call 1-800-MEDICARE to compare plans. PA MEDI counselors can also assist older adults with plan comparisons, help them enroll in a new plan and help them determine if they are eligible for any of Pennsylvania’s Medicare cost-savings programs like PACE, Extra Help, and Medicare Savings Program. If beneficiaries decide to change plans, their new coverage will start Jan. 1, 2022.

Older adults can visit aging.pa.gov/Medicare-counseling to find a PA MEDI event for open enrollment or an informational presentation in their area. They can also call the toll-free PA MEDI Helpline at 1-800-783-7067, Monday through Friday from 8 a.m. to 5 p.m. All services are free and confidential.

Created in 1983, the EPA Chesapeake Bay Program is the glue that holds together the cleanup partnership of federal, state, and local governments, conservation groups, and educational institutions. The Bay Program’s current annual appropriation is $87.5 million. Both the House and Senate are proposing $90.5 million for the Bay Program in FY22. If that amount is finally passed by Congress, then the addition of $238 million over five years through the infrastructure bill would raise the actual annual funding to $138.1 million in the coming fiscal year.

The Clean Water State Revolving Fund, administered by EPA, provides key funding for local investments to reduce polluted runoff and upgrade sewage treatment facilities. Of this $11.715 billion, approximately 20 percent will come to the six states in the Chesapeake Bay watershed and the District of Columbia.

Enactment of the bipartisan Infrastructure Investment and Jobs Act, including the provision of this crucial support for Chesapeake Bay restoration, was made possible by the tireless efforts of the Biden administration and many members of Congress in the Chesapeake Bay delegation. The Choose Clean Water Coalition, Chesapeake Bay Foundation, and Chesapeake Bay Commission thank them for their steadfast dedication and support for clean water.

The Falls Active Adult Center, sponsored by the Area Agency on Aging for Luzerne/Wyoming Counties, has announced its schedule of activities through the end of November.

Thursday, Nov. 25, and Friday, Nov. 26, the center is closed for the Thanksgiving holiday.

The Center will collect seasonal clothing for those in need.

Future Book Club selection on Dec. 6 at 10:30 a.m.: ‘The Book of Gutsy Women’ by Hillary and Chelsea Clinton.

The Wyoming County Active Adult Center sponsored by the Area Agency on Aging for Luzerne/Wyoming Counties, at 101 Dymond Terrace, Eaton Township, has announced its schedule of activities through the end of November. 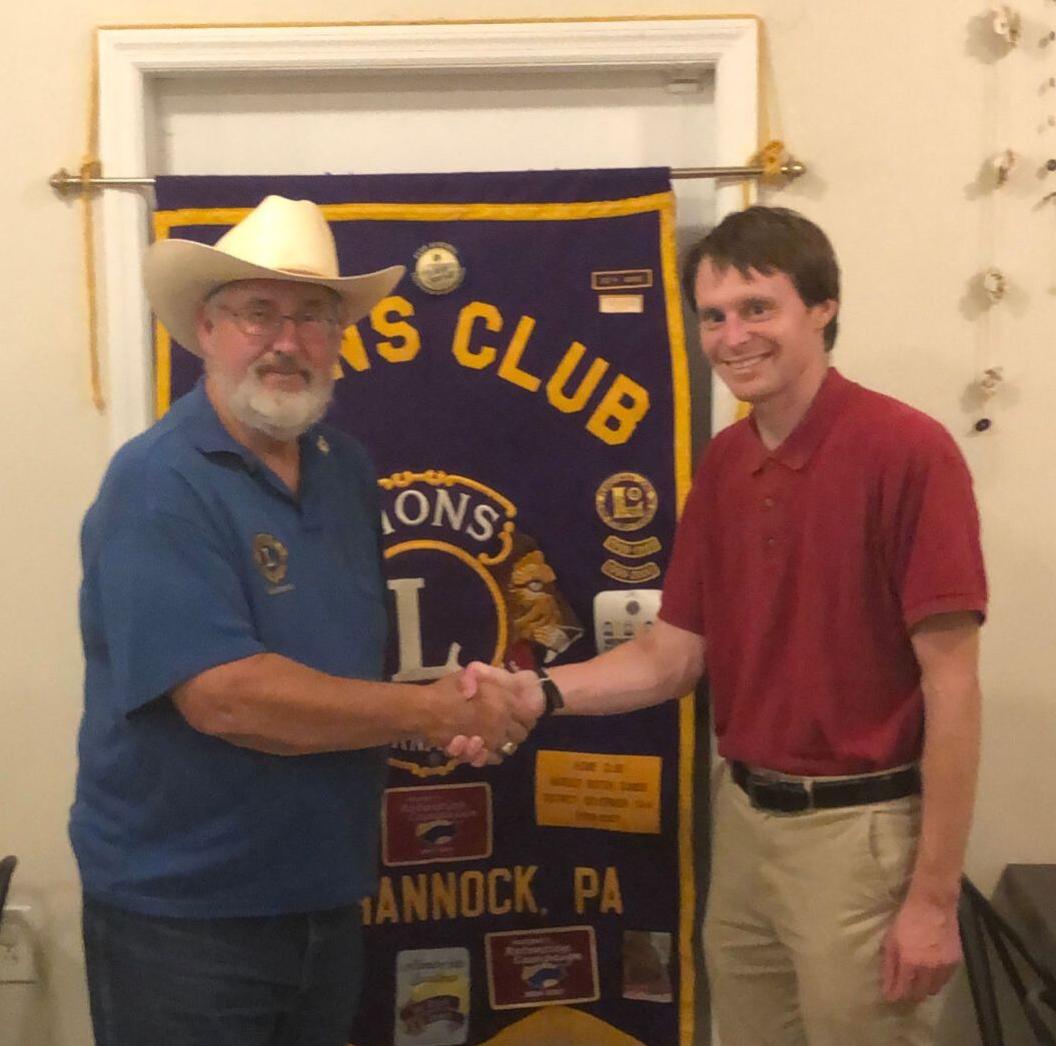 The Tunkhannock Lions Club would like to welcome new member Collin Fricke from Factoryville to the club. Anyone interested in becoming a member of the Tunkhannock Lions can contact Harold ‘Butch’ Sands at 570-836-1205 or Dale Wilsey at 570-836-6208. Anyone interested are also welcome to attend our meetings. They are held at the Fireplace Restaurant the first Tuesday of the month at 6:30 p.m., and the third Tuesday at 6:30 p.m., at Todd + Rachels Restaurant. You can also find a club near you at www.lionsclub.com.