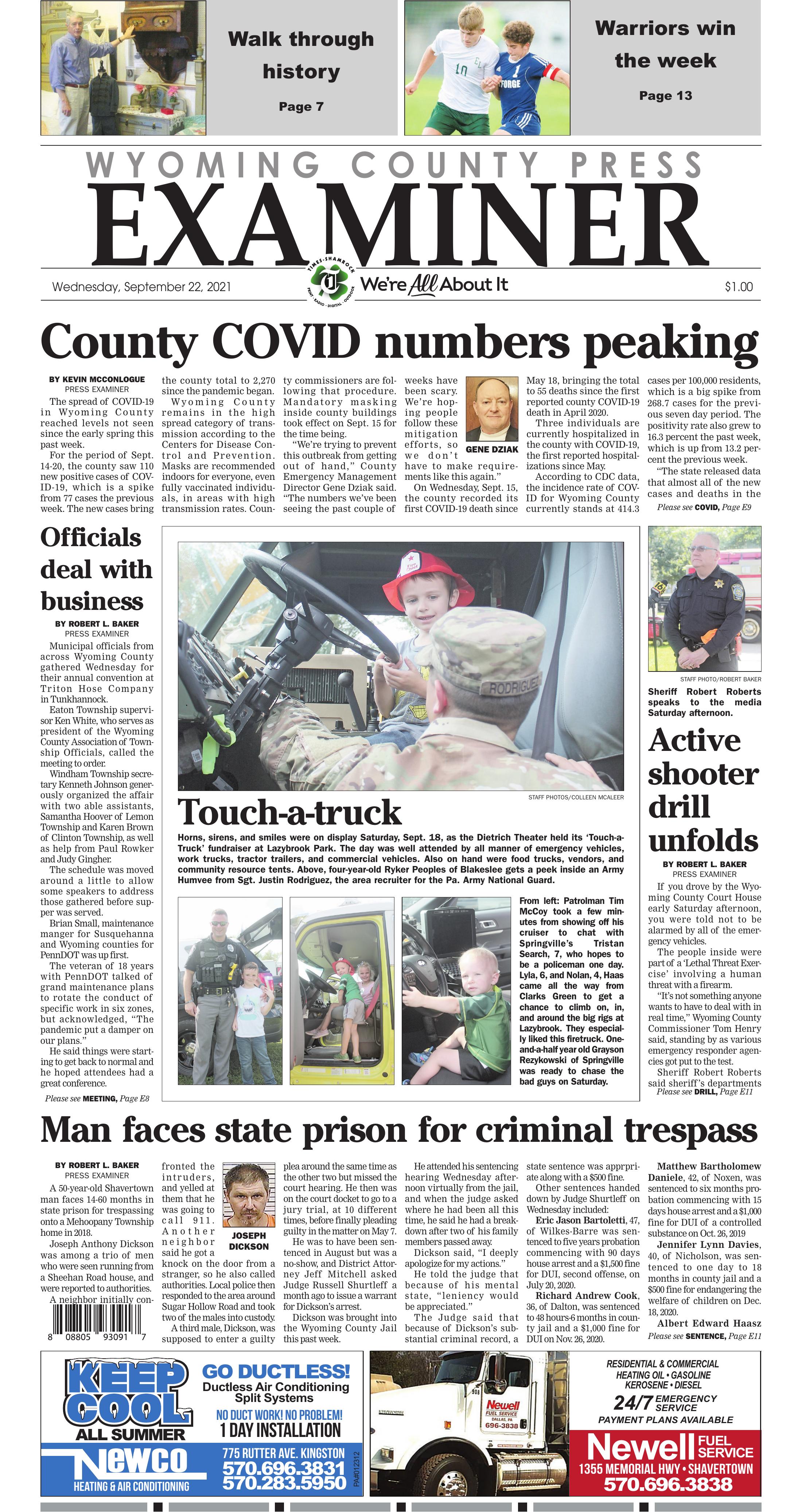 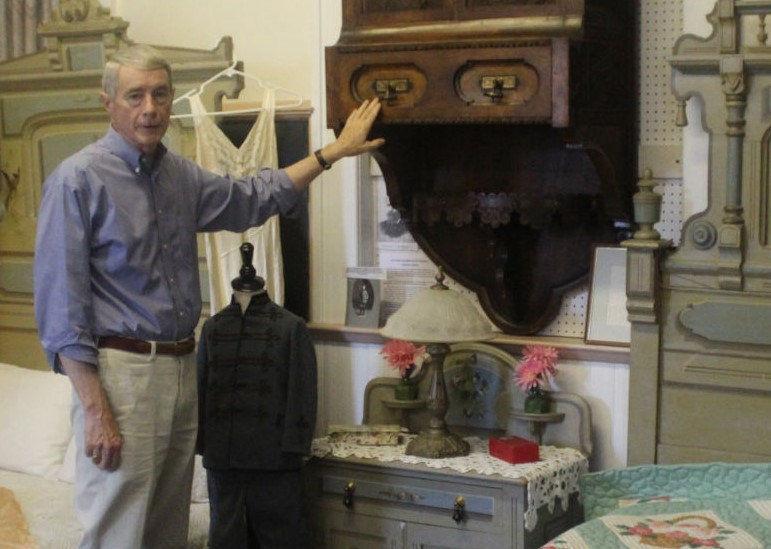 The spread of COVID-19 in Wyoming County reached levels not seen since the early spring this past week.

For the period of Sept. 14-20, the county saw 110 new positive cases of COVID-19, which is a spike from 77 cases the previous week. The new cases bring the county total to 2,270 since the pandemic began.

Wyoming County remains in the high spread category of transmission according to the Centers for Disease Control and Prevention. Masks are recommended indoors for everyone, even fully vaccinated individuals, in areas with high transmission rates. County commissioners are following that procedure. Mandatory masking inside county buildings took effect on Sept. 15 for the time being.

“We’re trying to prevent this outbreak from getting out of hand,” County Emergency Management Director Gene Dziak said. “The numbers we’ve been seeing the past couple of weeks have been scary. We’re hoping people follow these mitigation efforts, so we don’t have to make requirements like this again.”

On Wednesday, Sept. 15, the county recorded its first COVID-19 death since May 18, bringing the total to 55 deaths since the first reported county COVID-19 death in April 2020.

Three individuals are currently hospitalized in the county with COVID-19, the first reported hospitalizations since May.

According to CDC data, the incidence rate of COVID for Wyoming County currently stands at 414.3 cases per 100,000 residents, which is a big spike from 268.7 cases for the previous seven day period. The positivity rate also grew to 16.3 percent the past week, which is up from 13.2 percent the previous week.

“The state released data that almost all of the new cases and deaths in the past eight months have come from unvaccinated people,” Dziak said. “Everyone who could get vaccinated getting the shot is the biggest way we are going to make these numbers go down again.”

Vaccination rates in the county continue to slowly go up. According to CDC data, 62.8 percent of county adults are now fully vaccinated, which is a 0.8 percent rise from the previous seven-day period. 72 percent of adults have received at least one dose of a vaccine.

According to data, people ages 65 and older continue to make up the highest percentage of vaccinated individuals in the county. 95.6 percent of senior citizens have received at least one dose of a vaccine and 84.3 percent are fully vaccinated.

“I’m glad to see the vaccine numbers rising, but I’d like to see them rise faster,” Dziak said. “The shots have been proven to be effective, and to stop people from getting severely sick and dying.”

To schedule an appointment for a COVID-19 vaccine, Dziak said to call your doctor’s office or one of the local pharmacies to see if there are shots available and when they are being offered.

A 50-year-old Shavertown man faces 14-60 months in state prison for trespassing onto a Mehoopany Township home in 2018.

Joseph Anthony Dickson was among a trio of men who were seen running from a Sheehan Road house, and were reported to authorities.

A neighbor initially confronted the intruders, and yelled at them that he was going to call 911. Another neighbor said he got a knock on the door from a stranger, so he also called authorities. Local police then responded to the area around Sugar Hollow Road and took two of the males into custody.

A third male, Dickson, was supposed to enter a guilty plea around the same time as the other two but missed the court hearing. He then was on the court docket to go to a jury trial, at 10 different times, before finally pleading guilty in the matter on May 7.

He was to have been sentenced in August but was a no-show, and District Attorney Jeff Mitchell asked Judge Russell Shurtleff a month ago to issue a warrant for Dickson’s arrest.

Dickson was brought into the Wyoming County Jail this past week.

He attended his sentencing hearing Wednesday afternoon virtually from the jail, and when the judge asked where he had been all this time, he said he had a breakdown after two of his family members passed away.

Dickson said, “I deeply apologize for my actions.”

He told the judge that because of his mental state, “leniency would be appreciated.”

The Judge said that because of Dickson’s substantial criminal record, a state sentence was appropriate along with a $500 fine.

Other sentences handed down by Judge Shurtleff on Wednesday included:

Eric Jason Bartoletti, 47, of Wilkes-Barre was sentenced to five years probation commencing with 90 days house arrest and a $1,500 fine for DUI, second offense, on July 20, 2020.

Matthew Bartholomew Daniele, 42, of Noxen, was sentenced to six months probation commencing with 15 days house arrest and a $1,000 fine for DUI of a controlled substance on Oct. 26, 2019

Aaron Allen Milliron, 55, of Laceyville, was sentenced to 60 days-12 months in county jail and a $500 fine for possession of drug paraphernalia on March 30.

Justin Alan Paul, 28, of Tunkhannock, was sentenced to six months probation and a $300 fine for DUI on Mar. 6.

Charles Wilson Robinson, 75, of Springville, was sentenced to 14 months probation and a $500 fine for recklessly endangering another person on Mar. 22. 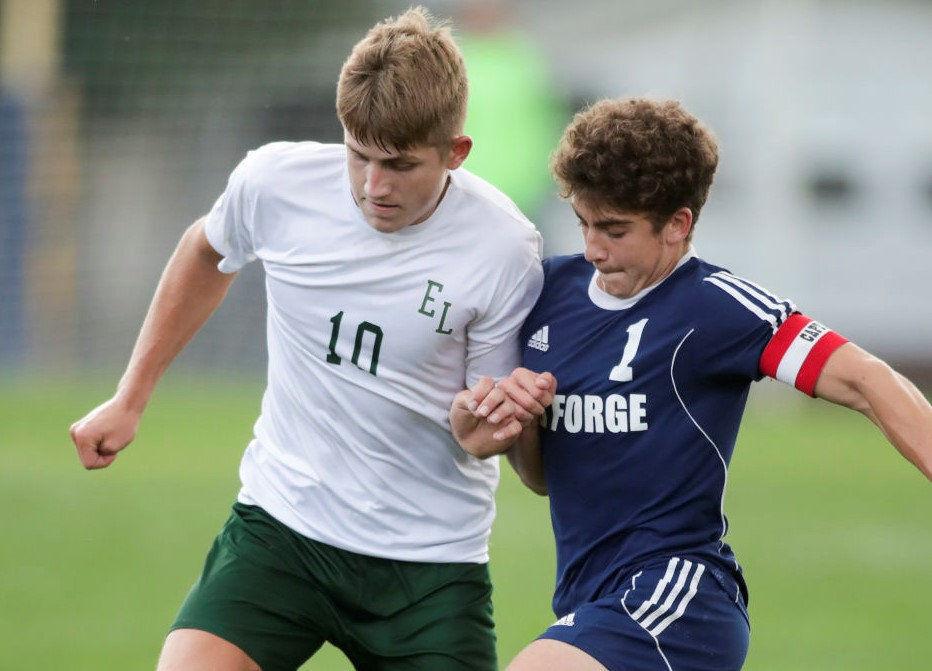 Eaton Township supervisor Ken White, who serves as president of the Wyoming County Association of Township Officials, called the meeting to order.

The schedule was moved around a little to allow some speakers to address those gathered before supper was served.

Brian Small, maintenance manger for Susquehanna and Wyoming counties for PennDOT was up first.

The veteran of 18 years with PennDOT talked of grand maintenance plans to rotate the conduct of specific work in six zones, but acknowledged, “The pandemic put a damper on our plans.”

He said things were starting to get back to normal and he hoped attendees had a great conference.

Commissioner Tom Henry thanked the township officials for what sometimes is thankless work. He noted that liquid fuels monies were currently available.

He also addressed the COVID situation, and the requiring of masks in the courthouse. “We’re trying to keep this situation from getting any worse,” Henry said.

He also addressed a lethal shooting exercise that would be happening at the courthouse with a simulated active shooter in the courthouse.

Commissioner Ernie King took to the podium and underscored a program approved the previous day for $50,000 in Legacy Grants to be used for parks and recreation. He said the deadline to apply for the funds was Oct. 29.

Sen. Lisa Baker, R-Lehman Township, thanked those in attendance for their hard work, and also the first responders identified in the program book.

She said that the Pennsylvania State Association of Township Supervisors “does great work in keeping us apprised of issues.”

She noted that next week the Senate would be taking up the naming of a stretch of Route 309 after Ed Nulton, the firefighter from Noxen, who was killed in the line of duty while directing traffic. She also said the county’s president judge Russell Shurtleff would be testifying Monday before a state senate panel in Harrisburg.

Baker said, “I also want to thank those of you who advocated keeping the emergency room open at Tyler Memorial Hospital.”

She said in the legislative session this fall, she wanted to take a hard look at the funding formula for PennDOT adopted in the 1990s that does not seem to be fair to smaller counties in the state.

Rep. Karen Boback, R-Harveys Lake, underscored the officials' tireless efforts on behalf of an emergency room in the county. “It was a serious public safety disaster in the making, and I appreciate all of you for helping us keep it (the ER) open.”

After dinner, the main speaker, Holly Fishel, policy and research director of PSATS, talked of legislative policies, but first talked a little about the American Rescue Plan, which funneled federal dollars to local communities. She discussed restrictions a little on what the monies could be used for.

“They cannot be used for a new pension plan, or pay off debt, or create a rainy day fund,” Fishel said.

She addressed the new Sunshine Law, which directs agencies to posting agendas a day ahead of their meeting. “For those of you who have websites, it could be as simple as posting the agenda on the website.”

Fishel thanked those present for serving their communities. “You do a great job of it,” she said.

County Planner Lynelle Farber told the audience that despite the pandemic, “The planning office has had an incredibly busy year.”

She said her agency is wrapping up an open space plan in the next week. She also reminded about the Legacy grants which King had discussed earlier. And she noted the ‘Heart & Soul’ program which she hoped all municipalities would sign onto.

With speakers completed, White asked for a report of the Resolution Committee of Steven Grow, John Keefe and Glenn Shupp. They seemed to suggest nothing was needed for the body’s discussion.

Regarding nomination of officers to preside over the next year, a motion was submitted from the floor, “Let’s keep all the officers we presently have.”

Business done, a considerable number of door prizes were handed out.

If you drove by the Wyoming County Court House early Saturday afternoon, you were told not to be alarmed by all of the emergency vehicles.

The people inside were part of a ‘Lethal Threat Exercise’ involving a human threat with a firearm.

“It’s not something anyone wants to have to deal with in real time,” Wyoming County Commissioner Tom Henry said, standing by as various emergency responder agencies got put to the test.

“In a rural area, we are limited, and try to deal with responses we face every day,” Roberts said. “So it’s a good opportunity for us to learn from each other.”

He noted that there were four actual scenarios placed before sheriff’s deputies.

By 2 p.m., they had completed the third scenario, with an announcement of somebody down, but details were practically nonexistent, and the media was not allowed in the building. “For safety reasons,” Sheriff Roberts said.

Roberts was clear that “It was not the same lethal outcome every time. We train for diversity.”

Roberts said that at the start of 2020, he began a comprehensive review of policies and procedures, “But unfortunately like everything else, it got interrupted by COVID-19.”

Plans resumed late last year as COVID seemed to be winding down.

Henry said the active shooter drill was something all three commissioners were behind, but seemed hesitant to talk about its cost.

“It was done with a $10,000 grant,” Roberts said, “and was part of a larger project to improve security.

He added that to put neighbors’ minds at rest, sheriff’s deputies began walking a specific radius of the courthouse on Wednesday, and let them know what was going to happen a few days later.

“The neighbors seemed grateful we let them know ahead of time,” Henry said.

He gave a shout out to the professionalism demonstrated by Roberts’ department as well as that from the neighboring counties.

Henry also acknowledged the Wyoming County probation office, the county Emergency Management Agency, and noted the county’s 911 office had its mobile command center up and running, so that feedback could also be up-to-the-minute.

“We’ve had many safety meetings before with active fire drills, so this wasn’t too far afield,” Henry added.

Roberts noted the info gathering is at about the nineteenth month, “and we’ll come back at the end of the year with a report.”

Henry said such drills make him confident “that we’re creating a safer place,” and doubted that it would have been possible to gather the same information while the courthouse was open.

Henry pointed out that while Tunkhannock Community Ambulance and Lake Winola had an ambulance each nearby, “nobody’s life was in danger.”